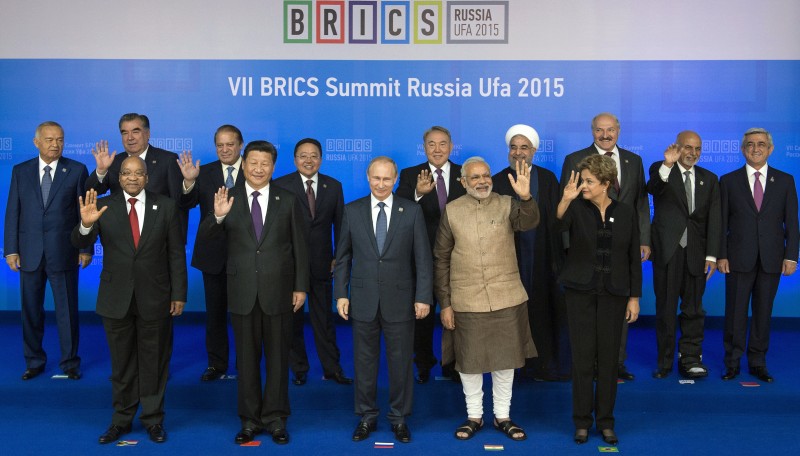 This weekend Russia, China, Brazil, India and South Africa reiterated their support for plans to develop a UN-led global warming deal, set to be signed off in Paris this December.

In a statement the world’s top emerging economies said they expressed “readiness” to address climate change and wanted to achieve an “comprehensive, effective and equitable agreement” later this year.

“We stress the importance of transfer of technology and scientific knowledge to address climate change and its adverse effects and therefore agreed to conduct joint research on the priority issues of common interest,” they added.

For more info on the Paris deal check our Q&A.

Specific targets include expanding research and development into “advanced energy technologies”, efforts to create the conditions for more investment in energy efficiency and the creation of a new energy “dialogue” between the five countries.

Still – it’s not all green. The statement also calls on cooperation to promote the “efficient and environmentally friendly use of fossil fuels” and talks of the development of technologies aimed at “hard-to-recover resources” extraction. I’ll leave you to work out where that refers to.

DO YOGA. FIGHT CLIMATE: “The world has two biggest problems today. One is terrorism and the second is climate change. The solution to both these problems can be found in Mahatma Gandhi’s life and his ideals.”

The words there of India PM Narendra Modi on his East Asia tour post BRICS. Modi also alluded to the risks of dangerous climate change at the Ufa meeting last week.

PAYING OFF POVERTY: A potentially huge climate and development finance meet kicks off in Addis Ababa today. Billions are needed to fund an impending set of new development goals, and the mooted UN climate deal.

Without cash neither will roll. This gathering is unlikely to deliver big bucks now, but it will offer a sign of how far countries have come in working out where the cash will come from. More here from our man in Addis Leo Barasi – with his full preview.

UN CLIMATE TALKS: One week to go until a two-day ministerial meeting opens in Paris. We’re expecting the new snazzy and shortened text for Paris to be available soon after. Here’s my latest take on what the process needs to sort out.

MINI ICE-AGE LOOMING? Despite suggestions in Sunday papers that a cooling sun will make it a little chilly, it appears not.

To summarise, scientists do NOT think any type of ‘ice age’ is imminent http://t.co/tcIR3iwINi http://t.co/p8LSdBMkO0 http://t.co/JwUUNDudas

The Guardian reports mini solar has joined onshore wind in being blacklisted by PM Abbott. “It is our policy to abolish the Clean Energy Finance Corporation because we think that if the projects stack up economically, there’s no reason why they can’t be supported in the usual way,” he said.

All this in a week when Canberra is expected to reveal what carbon cuts (or increases) it will target as part of a UN climate deal. Here’s the latest on what it could pitch for.

OZ CLIMATE RISK: Australia’s financial system may be vulnerable to the effects of climate change, which could be exacerbated by its carbon-intensive economy, lack of policy clarity, and reliance on global capital markets. That’s the headline from a new paper out by the Climate Institute think tank, called Australia’s Financial System and Climate Risk.

“The sub-prime bubble which led to the global financial crisis may offer insights, but there is no precedent for climate change in financial history which we can draw upon,” says John Connor, Climate Institute CEO.

RUSSIA MULLS GREEK SUPPORT: With Grexit looming, Moscow is upping the pressure on Brussels with indications it will directly supply Greece with energy.

SAUDI CRUNCH: The oil price slump is starting to bite in Saudi Arabia, says the FT. In the past year the government has borrowed $4 billion from local markets and selling its first bonds for eight years to sustain public spending. The country needs $105 a barrel to break even – but this year’s average is looking like $58.

Missed anything? Email me: [email protected]