Will Putin play hardball at the UN climate talks?

For Russian diplomats, a year of sanctions and conflict will provide the backdrop to Lima talks. Will this be payback time? 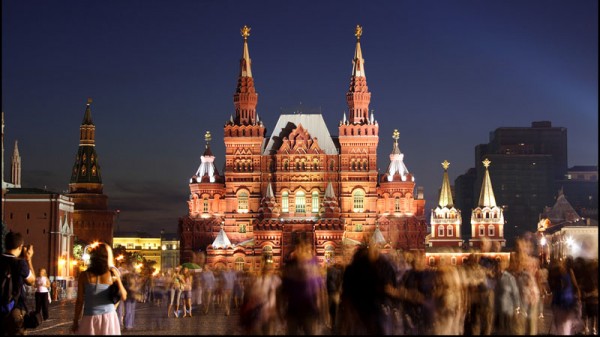 Russia holds one of the most inscrutable positions at the UN climate talks.

Even before the crisis unfolded in Ukraine, Moscow maintained an isolated role in the international negotiations. This was before economic sanctions kicked in and it was excluded from the G8.

Geopolitical tensions have inevitably welled up in other forums since. At the recent G20 summit in Brisbane, Putin faced blunt criticism from world leaders before flying home early, citing a lack of sleep.

Crashing oil prices have also raised questions over the country’s economic wellbeing. The world’s largest crude oil producer stands to lose $100 billion a year if they continue to plummet.

The question for Lima, where the UN’s latest round of climate talks starts on Monday, is whether the Russian delegation continues with negotiations as usual, or whether the strain will slip into the climate change arena.

And with a year to go until governments are set to sign off a UN agreement to curb greenhouse gas emissions, the intentions of the world’s fifth largest carbon polluter could be critical.

On paper its position seems simple.

Russia’s emissions are expected to peak in 2020, before returning to 25-30% below 1990 emissions by 2030 – a target it indicated would be part of its contribution to the UN climate deal at a summit hosted by UN secretary general Ban Ki-moon in September.

But the Kremlin has given no public indication so far of the hand it will play when countries gather for discussions next week.

A hostile approach to the Ukrainian delegation have been predictably obvious.

The two negotiating teams have been forbidden from cooperating at the talks, and in an email to RTCC one Ukrainian diplomat said that he would not be attending Lima “due to the current political situation and Russian aggression”.

But the politics of climate change have a habit of moving against the tide of wider geopolitical relations.

Attitudes towards global warming have seen a chasm develop between the UK and Australia, despite otherwise friendly relations.

While in US President Barack Obama’s recent visit to China, it emerged as a central area for cooperation amid disagreements over democracy, human rights and cyber security.

Todd Stern, the US lead negotiator at the UN climate talks, said in a recent interview with EurActiv that Russia’s behaviour would remain a mystery until they were in the room in Lima, but that the two would continue with positive discussions.

Stern’s uncertainty is telling, considering the US has traditionally negotiated alongside Russia in a bloc called the Umbrella Group. This also includes Canada, Japan, New Zealand, Kazakhstan, Norway and Ukraine.

This is the only group with which Russia aligns itself at the talks, making it a unique window through which some countries may glimpse into the mind of the Kremlin.

But the group is fracturing, and not only because of Russia and Ukraine.

Climate change has risen up the US agenda since Obama came to office, while the governments of Canada and Australia have been widely criticised for backsliding on their emissions reduction efforts.

They present themselves as united, but their tactics in fighting global warming could scarcely be more different.

“We are meeting and we are sharing ideas, but we are not really negotiating as a group,” Aslak Brun, Norway’s chief climate negotiator, told RTCC. “We have our opening statement in plenaries, gratitude for co-chairs, these sorts of things, but the views in that group are very varied.”

And while Norway has continued its bilateral engagement with Russia as usual, the Ukrainian delegation has not been seen in their group meetings for quite some time, he adds.

Meanwhile, Russia could find itself in an awkward situation with France, the hosts of next year’s climate conference in Paris, where the historic deal is set to be signed. President Francois Hollande has suspended the delivery of two Mistral helicopter carriers to Russia over the situation in Ukraine.

But Alexey Kokorin, who leads WWF-Russia’s climate and energy programme, told RTCC that he did not expect any public tensions to mar his country’s behind-the-scenes relationships.

“Russia will not shake hands with United States and Ukraine, but behind closed doors Russia will closely cooperate with members of the Umbrella Group,” he said.

So far, Russia has shown no signs that economic sanctions and undelivered warships have altered its position on climate change.

Speaking to RTCC ahead of Lima, Russian lead negotiator Oleg Shamanov emphasised that, like the majority of participants, he wants to see a draft negotiating text emerge from the talks.

Otherwise, he said, “we are sunk in Paris”, where the final treaty will be signed next year.

He spoke of seizing the opportunity of Lima and accelerating the work towards the new deal, in recognition of the twelve month deadline looming over the negotiations.

But he also raised the topic of the UN’s procedural and legal rules on decision making.

If it sounds dry, that’s because it is. It was just dry enough to kindle into a week of flames at a round of climate talks in June 2013. 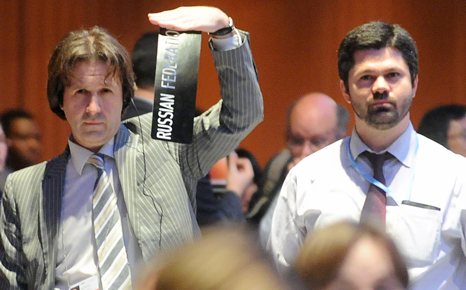 The spark that caused the fire was Russia’s refusal to let discussions progress unless a session on UN negotiating rules was tabled into the agenda – dealing, in particular, with how voting works.

Countries agreed that it was an important topic, but resented the holdup. Some observers suggested it was retaliation for Russia’s humiliation in the Doha conference at the hands of the Qatar presidency, which gavelled over its objections to an extension to the Kyoto Protocol.

Russia looks ready to raise the issue again. In a submission to the UN last week, Russia reminds the secretariat that “consensus is not synonymous to unanimity” and requests their legal opinion on the matter.

This does not amount to a pledge to block. The subject, when it came up last in Warsaw was managed smoothly, without detracting from other more substantive issues.

What it does show is that Russia has the ways and the means to play hardball at the UN talks if so inclined.

But for Todd Stern, and for everyone else, the Kremlin’s game plan is likely to remain a mystery until the curtain opens on Lima next week.