Poorer EU states get €17-25.5 billion for their energy sectors next decade. This could be a coal subsidy or a green model 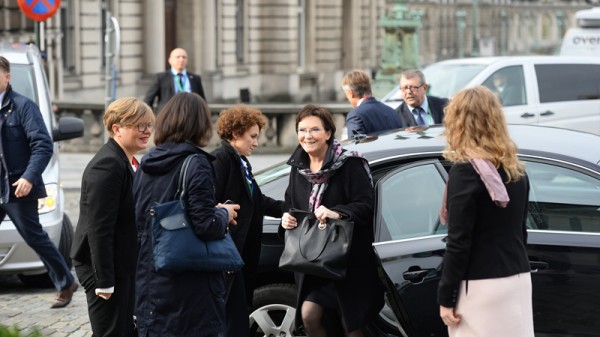 Ewa Kopacz said “the news for Poles is good” as she emerged from the meeting of national leaders that agreed the package.

Given that country’s attachment to burning coal, the suspicion must be that a win for Poland is a loss for the climate.

So what exactly did Poland extract from the deal and at what cost?

Kopacz promised as she entered the negotiations not to accept a package that would push energy prices up for Poles.

Poland is one of the poorer countries in the European Union, with GDP of US$13,000 a head in 2013, according to the IMF.

Poland also has one of the most carbon-intensive economies, relying on coal for more than half of its total energy demand.

It is Europe’s second largest producer of coal, after Germany, and foresees the cheap and dirty fuel as its main energy source out to 2060.

While a privatisation programme is under way, much of Poland’s energy sector is still owned by the state.

In negotiations, Poland teams up with other former communist states in eastern and central Europe.

Together with the Czech Republic, Slovakia, Hungary, Bulgaria and Romania, it completes the Visegrad Group.

Before the meeting, the group stressed that greenhouse gas goals must be set “realistically” and include measures to stop heavy industry fleeing abroad.

“Realistic” in this context is the opposite of ambitious.

For Poland’s deputy prime minister Janusz Piechocinski, the proposed 40% emissions cut was “unacceptable” and “destroys half of Europe’s industry”.

Despite the best efforts of campaigners to convince Poland green energy is in its best interests, the government appears reluctant to break with its coal-heavy tradition.

And they called for cash to help lower income countries “modernise” their energy systems – a word that does not exclude investment in coal plants. 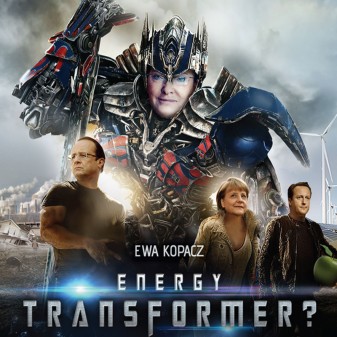 On the headline greenhouse gas target, Piechocinski did not get his way.

But Poland’s national target will be significantly less steep.

Under the agreement, all member states must take part in efforts to cut emissions, “balancing considerations of fairness and solidarity”.

Similar to the UN’s principle of “common but differentiated responsibility”, this requires wealthy countries to make deeper cuts than emerging economies.

To understand how these cuts are divided between countries, you need to know the difference between the traded and non-traded sectors.

Power stations and big industrial emitters representing around 45% of the EU’s greenhouse gas emissions are covered by the EU emissions trading scheme (ETS).

This is a “cap and trade” system. A limited number of pollution permits is issued each year, which can be traded between companies.

The remaining 55% of emissions, whether from cars, heating homes or farming, are not tradable.

Each country gets a share of the non-ETS target, based on its relative prosperity.

Somewhat confusingly, while the overall 40% emissions cut is from 1990 levels, the detailed targets are measured against a 2005 baseline, when the ETS was launched.

No individual country is named in the agreement, but there are specific provisions for low income  member states, defined as having GDP per head less than 60% of the EU average. Poland is one of eight countries in that category.

On the ETS side, Poland won the right to continue giving free allowances to its energy sector up to 2030.

Carbon Market Watch estimates the value of these at between €5 and €7.5 billion over the next decade, depending on the carbon price. Across all eight low income states, it is €11-16.5 billion.

That range covers a carbon price of €20-30 a tonne. The price is around €6/t at present, but analysts at Thompson Reuters forecast that will rise to an average of €23/t between 2021 and 2030, as proposed ETS reforms kick in.

For Poland’s energy sector, free allocation limits the impetus to shift away from burning coal, which is roughly twice as polluting as natural gas.

The freebies should be used “to promote real investments modernising the energy sector,” the EU agreement states.

There is nothing to stop recipient countries directing that investment towards coal plants in what is effectively a subsidy.

There will also continue to be free allowances worth €120-300 billion for heavy industry across Europe.

Since the ETS was first conceived, industrial emitters have argued they need free permits to allow them to compete with overseas rivals.

There have been moves to phase out free allocation, to encourage these sectors to become more energy efficient.

Other parts of the world, including regions of China, are introducing carbon markets and taxes, closing the gap with Europe.

But as long as there is a gap, the competitiveness argument has traction in Brussels.

On top of that, Poland will get a share of cash from the sale of 2% of Europe’s carbon allowances to “provide their citizens with cleaner, secure and affordable energy”.

This pot is worth an estimated €6-9 billion.

Use of these funds will be “fully transparent”, the statement promises, and the European Investment Bank (EIB) involved in choosing the projects.

This is slightly looser than an earlier draft, which channeled the funds through the EIB. It leaves open the possibility of investing the money in coal.

The EIB has effectively ruled out finance to new coal plants unless they have carbon capture and storage.

Revenue from another 10% of carbon allowance sales will be distributed among a wider group of member states with GDP per head less than 90% of the EU average, to spend as they please.

Green groups will be watching these funds and the allocation of free allowances closely.

In a review of similar mechanisms between 2013 and 2020, Greenpeace found Poland was spending the majority of its share boosting fossil fuel capacity and reducing its budget deficit.

Just 8% of its planned investments to “modernise” the energy system are to go into renewables. 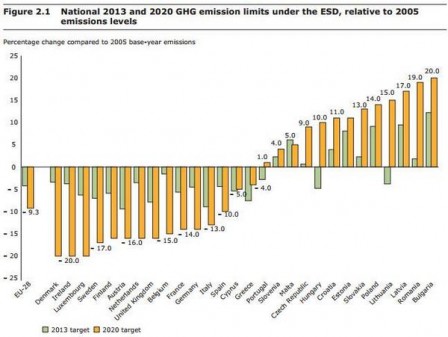 Finally, in the non-ETS sector, European leaders agreed to continue the “effort sharing decision” used to divide up the 2020 target.

In a move advocated by Denmark, countries will be able to use ETS allowances to offset some of their emissions in the non-ETS sector.

This could also weaken the overall emissions cuts.

But Kopacz’s promise not to let energy prices rise for consumers was optimistic.

Whether it goes down a low or high carbon route, Poland’s energy sector needs major investment to replace or refurbish aging power stations.

Poland’s foreign investment agency estimates 150-200 billion zloty (US$45-60 billion) is needed in the next 15 years.

And its domestic coal mines are struggling to compete with Russian imports, making coal a questionable bet for Poland’s future energy security.

The decision to go for free emissions allowances rather than more cash makes it less likely Poland will take the low carbon route.

If it builds more coal power stations, this locks in high emissions for decades to come.

That in turn weakens Europe’s position in international negotiations.

On the other hand, Poland’s success in extracting cash from its wealthier neighbours could give hope to developing countries eager for climate finance.

The UN has spent years developing its Green Climate Fund to channel money into climate change projects in some of the world’s poorest countries.

It is targeting start-up capital of US$10-15 billion, but rich countries have been slow to chip in.

Over the next decade, the European Union is set to distribute twice that amount to its poorer members for energy investment.

If it goes to new coal plants, it will seriously undermine the EU’s credibility as a climate leader.

If that money goes to climate-friendly projects, it can be a model for the rest of the world.