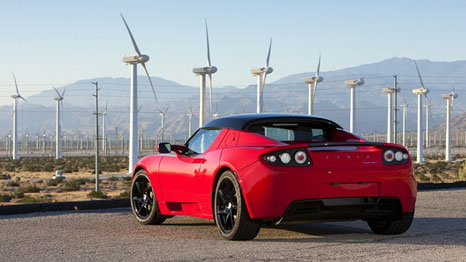 Electric Tesla cars are one of the luxury products borne from the push towards sustainability (Pic: NRMA Motoring and Services/Flickr)

The New Climate Economy report provides the first major, authoritative account of the economic case for acting on climate change since the seminal Stern Review of 2006.

It’s backed by an impressive array of current and former global leaders from 19 countries.

These include six former heads of government and finance ministers, the head of one the largest private banks in China and the former head of its biggest public one and the heads or deputies of seven international economic institutions, including the OECD.

And its arguments are not theoretical.

Whereas the 2006 Stern Review was largely an exercise in the theory of climate economics, this one (entitled Better Growth, Better Climate) is all about how a low-carbon economy can be designed and delivered on the ground, particularly in developing countries.

Its focus is intensely practical, fulfilling its aim not to be a ‘climate report’ but an economic one. It explicitly takes the perspective of ministers of finance and economy, city mayors and business CEOs whose primary goal is not cutting emissions.

Their goals are jobs, profits, urban development, energy and food supply, stable public finances. So the report answers the question – how can these decision-makers achieve their own aims while reducing climate risk at the same time?

Its conclusions have a clear target. The report focuses not so much on current emissions, but on their future growth.

It is after all the path of emissions over the next couple of decades that will determine the future of the world’s climate system.

The vast majority of these emissions will occur in large and fast-growing developing countries; and they will occur in three major systems – cities, land use and energy.

So it’s on these that the report focuses. It points out that over the next 15 years around $90 trillion is likely to be invested in infrastructure in these systems, and that investment will lock in either a high-carbon path, or a low-carbon one.

Get these investments right, and we have a chance of holding warming at or close to the 2C limit. Get them wrong, and the world will head for the catastrophe of 3 degrees plus.

That focuses the political choice facing the world’s policymakers and investors pretty starkly.

The report shows that low-carbon infrastructure investments are barely more expensive (around 5%) than high-carbon; and will pay for themselves over time in lower operating costs. And most importantly, they will bring multiple economic and social benefits – such as cleaner air, less traffic congestion and environmental sustainability – which make them a rational economic choice even before their climate benefits are considered.

So the case it makes for low-carbon infrastructure investment (and it show not only how to do it, but how to finance it) is pretty powerful.

It’s no coincidence that the report has been published a week before the UN Climate Summit.

It aims to give the political leaders gathering there a new narrative for action on climate change. For too long the received wisdom has been that cutting emissions is the right thing to do for the long-term but a painful economic sacrifice in the short.

It’s not a sacrifice. It’s an economic gain. We should do it not just because it’s good for future generations; it’s good for us now.

What’s particularly striking about this message is that it now represents a remarkable consensus of the world’s leading economic institutions.

They serve in a personal capacity, but each of their organisations is already making this case in their various fields, and each has contributed to the Commission’s research.

That in turn should give this report much greater impact. For the other notable fact here is that this isn’t just a report.

Over the last year the Global Commission has fostered a considerable coalition of support among international public and business organisations behind its core recommendations, which it has published as a ten-point ‘Global Action Plan’.

Over the next year it will discuss them in detail with governments, businesses and civil society across the world. The UN climate summit in New York next week will already begin to take many of them forward.

It’s easy to be cynical about big reports. Too many come out with a bit of publicity and then sit gathering dust on the shelf.

This one has a bigger ambition. If it succeeds, it could mark the moment when the climate debate changed course.

Michael Jacobs is Senior Adviser to the Global Commission on the Economy and Climate. Follow him @michaelujacobs