The miseducation of Narendra Modi on climate change 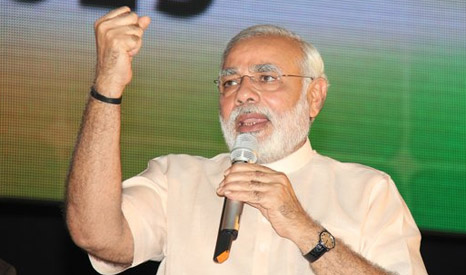 Teachers Day in India is usually a staid affair to felicitate teachers and honour the profession.

This year it became a political grandstand with the BJP prime minister Narendra Modi dislodging the President of India from his customary prerogative of addressing the nation’s teachers.

On Friday September 5 Modi took to the stage in a packed Delhi auditorium to address not teachers but the nation’s students. Seven hundred were in the hall, but students across India were listening.

In a mass propaganda exercise – his government had made the speech, held during school hours, compulsory for all students – schools were required to arrange TVs for live transmission.

While Modi’s speech was short, it was the more than one-hour long Q&A that made the headlines.

Within minutes of the transmission India’s TV networks and social media were abuzz with the more controversial elements of his address.

Not his statements on saving electricity or the need for toilets for girls, but his bizarre explanation of climate change, which many slammed as climate denial.

In response to a girl student from the eastern state of Assam, who noted her generation’s concern about climate change, the premier had replied “The climate has not changed. We have changed.”

In multilingual India, even though the student had asked her question in English and the Hindu nationalist Modi had replied in his preferred Hindi, nothing was lost in translation.

Modi’s opening reply was reported in the media as: “Climate has not changed. We have changed…our tolerance and habits have changed. If we change then God has built the system in such a way that it can balance on its own.”

He then spent the next six minutes expounding Indian cultural values on the environment and invoking Hindu scripture, before ending with a surreal reference to threading a needle by moonlight.

In a country that faces power cuts on a daily basis the idea of spending an evening in the dark is not a novelty, but Modi somehow made it appear desirable.

Ironically while he was giving his Bhashan, students in Agra gathered around their school TV set praying for the electricity to return so they could hear the PM’s address. (Power cuts did not feature in Modi’s speech.)

If the PM’s response left students bemused, it angered many others. The PM’s apologists have tried to spin him out of trouble claiming he was misunderstood.

But millions of native Hindi speakers, including myself, have seen the broadcast and are in no doubt about what it implies.

This is why the PM’s words – fully translated – have been rightly slammed in the Indian media. Nothing has been ‘lost in translation’.

The question needs to be asked. At a time when Kashmir is suffering the worst floods in independent India why can the prime minister of India not give a straight answer on climate change and climate risk?

Why give patronizing guff when an intelligent young person asks a serious question and the Kashmir floods could have provided a clear and present reference point and example?

Modi is a consummate politician who elsewhere in his speech noted the importance of using words carefully.

Why then the folksy whimsical response on climate change?

Earlier in his address Modi spoke of being impressed with Japan’s “scientific temperament” on his recent visit. Why then leave science out – the starting point surely for any response on climate change?

Narendra Modi is not your average politician when it comes to climate change.

Four years ago he projected himself as India’s answer to Al Gore when he published an  Convenient Action: Gujarat’s action on climate change as chief minister, although his former state still does not have the state-level climate plan required by central government.

Given Modi’s public image as a climate guru, his mis-education on climate change on Teachers Day is all the more eyebrow-raising. Inexcusable some would say.

The point is simple and non-political. On Teachers Day, India’s prime minister had an unparalleled opportunity to talk to young India about climate change.

He had a captive audience of millions of students across the country whose future will be defined by climate change. But instead of educating them on the issue, why it mattered to India and what his government planned to do about it, he talked about threading needles in the moonlight.

Of course it would also have been an ideal opportunity to talk about the UN Secretary General’s upcoming Climate Summit and link India’s future growth and development ambitions to leadership at the Summit. But the opportunity was squandered.

Even by the standards of the government of India’s usual communications on climate change, Modi’s gaffe marks a new low. It makes one wonder if the PM was even briefed by senior officials.

If he has not done so already, Narendra Modi might wish to pick up the phone and ask his fellow Delhi resident, Dr Rajendra Pachauri for a personal briefing on climate change and India.

The chairman of the UN’s IPCC climate science panel might be able to fill in the evident gaps in the PM’s knowledge about why climate change poses a development risk to India and offers a low-carbon growth opportunity.

Perhaps then we will have less talk about the sun and moon and stars, and more about how India’s government is going to show the leadership on climate change that its young people deserve.