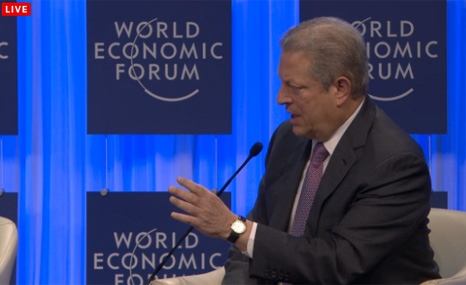 With the heavyweights and luminaries of business, politics, academia and media in town, you can feel the power and influence drip off events like the melting icicles on the eves trying to survive the morning sunshine.

The discussions are upbeat this January in Davos – an economy in recovery. But the spring in the step of the CEO’s outlook is tempered by a recognition that there are systemic risks in the global economy which threaten the long-term return to business as usual. climate change is one that is featuring widely.

Davos this week has 23 dedicated events over four days on climate change. This prominence reflects the recognition at the top rungs of the Forum that public-private action on climate change has to ramp up in the lead up to reaching the critical 2015 global climate deal.

WEF’s Global Risks report, compiled with the input of 700 global experts, warns us of these threats to long term recovery. Taking a ten year outlook, the report assesses 31 global risks, each holding “the potential for failure on a global scale.”

Amongst those most likely to happen are an increasing wealth gap, extreme weather events, and climate change. Amongst those with the biggest potential impacts are fiscal crises, climate change and water shortages. Big risk appears to be registering on the global agenda.

But read this alongside PwC’s own CEO survey, released in Davos this week, and you see something different. It’s the risk reality for CEOs and business. Priorities show the mountain to climb to implementing a global deal that must limit global warming to 2C by 2100.

When asked what is the biggest threat to revenue growth in the next twelve months, 58% of global CEOs were not very, or at all concerned about supply chain risk; 43% aren’t worried about energy costs; and 45% don’t see issues with raw material prices or availability. All areas impacted by extreme weather and climate change.

Their perception of risk three years down the road, shows only 1 in 4 will be focusing on climate change and biodiversity loss as a priority. Within five years, resource security and urbanisation doesn’t even feature in the top three potential trends transforming businesses.  In other words, the reality of the scale of business disruption from these systemic risks, has not hit home.

Here’s the dilemma.In ten years, according to the WEF survey, extreme weather and environmental risk are the most likely risks facing the global economy, and amongst the top five of those with the most potential impact.

A global systemic risk identified by experts as highly likely within ten years, isn’t registering as a priority on CEOs’ radar within five. CEOs are used to dealing with risk, planning and investment cycles. But there is a disconnect between WEF’s global economic risks, and the boardroom of Business Inc.

Every passing month and year in which decisions and investments are made in the absence of considering climate risks, companies and investors run the risk of aggregating stranded assets, from a climate risk and a carbon perspective.

Stranded assets and the ‘carbon bubble’ is a private debate happening here in Davos tomorrow with leaders from our countries central banks and private banks. The call to compel carbon asset valuation, and shrink this bubble in the global capital markets before it bursts, is becoming more mainstream.

It’s not all doom and gloom. We have a growing cadre of well informed, and forward thinking multinationals who can see the reality of climate change. They see commodity costs rising, performance impacted by extreme weather, or long term climate pattern shifts including water availability, supply chain interruption, and the impact on the emerging markets they want to grow in.

They also see the opportunities for growth, resilience and cost reduction enabled by new technologies and business models, including renewable and energy efficient inputs, re-manufacturing, product life extension, and sharing/renting under utilised assets to name a few.

The language of climate change has long been associated with the worst case scenario – the scare story. Let’s be frank, that’s where we are heading on our current trajectory of ambition to reduce greenhouse gases. A 4C warmer world in the lifetime of our grandchildren and children .

Communication is key. I’ve worked in business on issues of climate risk and natural disasters for over 15 years, and I’ve yet to pitch any idea to a client with such a stark and uninspiring tone.

You don’t want your audience to give up before the real work begins; a picture of solutions, of growth and of positivity motivates human spirit after all. It’s that shift in communication style that we now need to see – from business to media to science voices. Not only is the economic transformation needed possible – it can also lead to lifestyle improvements. That’s the under-told story.

Taking part in the sessions here at Davos, it’s clear to me we’re seeing a shift to a greater understanding of the issues and the solutions. But it also underlines how one of the biggest failures of the climate change debate, has been the ability to link economic growth, the environment that fuels and feeds it, to the fundamental principles of business risk and value creation. Communication has so much to do for climate change, and so little time to do it in.

As the business leaders fly out from Davos this weekend, some travel time would be well spent absorbing the detail of the EU’s proposed framework for energy and climate change policies to 2030.

No matter whether you consider them too much or too little in terms of ambition, an EU block considering a 40% emission reduction target to 2030, a binding 27% renewables generation target and energy efficiency improvements mean whether businesses recognise it as a climate change issue or not, change is coming, and business as usual is not an option.

As the clock ticks on the world’s half empty and rapidly dwindling carbon budget, a carbon price in some form is coming, and will only get more and more expensive.