Are the economics and ethics of fossil fuel divestment aligning? 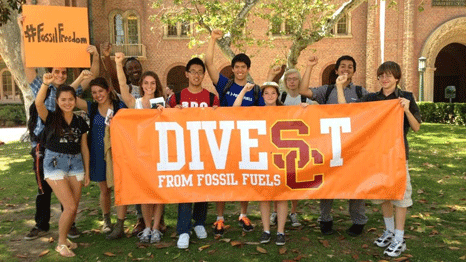 Students protest the links between the University of Southern California and the fossil fuel industry (Source: 350.org)

For many climate activists 2013 will be remembered as the year that the intertwined carbon bubble and carbon budget concepts hit the mainstream.

And it is about time, given that we are set to push past our carbon budget by 2034 if not earlier if we do not radically alter the path we’re on.

The divestment movement was not alone, of course, as there has been a flurry of reports and actions on the carbon bubble from the likes of Ceres, the Carbon Tracker Initiative, UNEP, Standard and Poors, HSBC, Citi, Goldman and Sachs… The list goes on.

The fossil fuel divestment movement, however, is growing so fast that it may, in the words of an Oxford University report, already be entering the second wave of divestment – progress it took other divestment movements many, many more years, protests, sit-ins and frustrating board meetings to achieve.

So what does the second wave entail?

Traditionally, in the first wave of divestment, small U.S. institutions and universities divest and in doing so begin to shift the tides of public opinion, according to the Oxford report.

In the second wave, bigger U.S. institutions such as Columbia, Harvard and Brown University divest, and in doing so trigger the third wave of divestment, global divestment and, potentially, the wide-scale shifting of social and market norms.

However, despite having clearly passed the first wave of divestment, bigger institutions such as Harvard and Brown are digging their heels in and refusing to divest, claiming that it would turn their endowments into political tools in ways they are just not comfortable with.

So what’s a divestment movement to do?

Indeed, in the case for divestment from fossil fuels, unlike other divestment movements, the ethics and the economic arguments are closely aligning to create a rather solid argument in favour of divestment or something very close to it.

The evidence is becoming so strong that university students  might arguably be able to put a successful case together against non-divesting endowments managers of abdication of their fiduciary duty to ensure, as best as possible, profitable returns for their endowment.

Here at the University of Washington we are planning on doing just that.

In a very recently updated, freely available research paper, which incorporates a breadth of research on divestment, I have put together just how the economics and ethics of fossil fuel divestment are aligning and why, if university endowments and other institutions are paying attention, the second and third wave of divestment from fossil fuels may be very close on hand.

The next 12 months promise to be exciting.

Alex Lenferna is a South African Fulbright Scholar pursuing a PhD at the University of Washington. He leads the Seattle-based group Confronting Climate Change 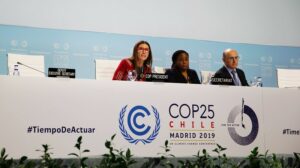