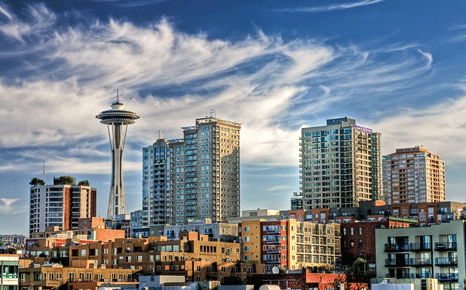 Seattle, USA
Seattle was the first city to commit to divest its daily operations ($1.4 billion) from the fossil fuel industry as part of the Go Fossil Free campaign on 21 December 2012.

It has been working on fully divesting throughout 2013 and actively encouraging other cities to follow, announcing in April 2013 that nine mayors and city councils across the country were joining the Mayor of Seattle in urging their cities to divest from the top 200 fossil fuel companies because of the industry’s responsibility for the climate crisis.

Barcelona Smart City has already had a large impact: 50% of Barcelona’s lighting power is controlled remotely and 12% of the city’s parks are projected to have remote irrigation control by the end of 2013.

Barcelona hosted public engagement weekend BioBlitzBCN in April 2013, and has this year redeveloped the Passeig de les Aigües to include an extra two kilometres exclusively for the use of walkers and cyclists in the 73km “Ronda Verda” or green ring road.

Suwon, South Korea
The inagural EcoMobility World Festival ran in September 2013 in the Haenggung-dong neighborhood of Suwon, where an area the size of 63 football fields with 4,300 residents committed to go car-free for a month. Halfway into the month-long festival organised by ICLEI- Local Governments for Sustainability, UN-Habitat and the City of Suwon, Suwon’s Haenggung-dong neighborhood was still 95% car-free.

Statistics from 10 days in showed that more than 310,000 visitors visited the neighborhood to try out unique eco-friendly vehicles and take part in diverse workshops, tours and cultural performances. 2000 cities around the world participated in EcoMobility week 2013, with Suwon the only city to go car-free for a month.

Rotterdam, Holland
The Port of Rotterdam is one of few ports investigating the ‘Smart Grid’ concept to integrate more wind, solar and low-carbon generation, while also creating more local control and a better understanding of power needs.

Its Rotterdam Climate Initiative, which was introduced in 2006 to reducing carbon dioxide emissions by 50% by 2025, is also currently researching the feasibility of a Virtual Power Plant for the port district.

Through its Climate Adaptation Partnership, Rotterdam is sharing its best practices with Ho Chi Minh City, and supports the Vietnamese city in the implementation of the same technologies, policies and approaches as it develops its port and expands towards the sea.

The city launched the “Rotterdam Climate Proof” adaptation plan in 2008 which aims to make the city of 1.3 million people “fully” resilient to climate change impacts by 2025, and a 2010 fullow-up report which found that the initiative is making “full progress” toward its initiatives and broader goals.In 2010 the city built the Floating Pavilion, which is now the Netherlands’ largest public floating structure, offering a solution to solve problems of water, climate control, and electricity needs with sensitivity to social dynamics and spatial integration.

The 438-page plan was based on hyper-local climate models from the Intergovernmental Panel on Climate Change’s Fifth Assessment Report.

Additionally, in April, Bloomberg announced that he had secured the pledges of 10 large companies (AIG, BlackRock, Bloomberg LP, Credit Suisse, Deutsche Bank, Google, Goldman Sachs, JetBlue, JP Morgan Chase, and PVH) to cut their New York office emissions by 30% by 2030. These companies join 17 universities and 11 hospitals in New York in signing Bloomberg’s “Carbon Challenge” pledge which was first launched in 2007.

In June, Mayor Bloomberg announced that New York had cut greenhouse gas emissions city-wide by 16% compared with 2005, meaning New York is halfway to its goal of a 30% decrease by 2030.

New York came first in the Adaptation and Resilience category in Siemens and the C40 City Climate Leadership Awards 2013.

Quito, Ecuador
A 2013 case study on Quito showed that the city has invested nearly $350 million in adaptation since the Quito Climate Change Strategy was launched in October 2009.

The Strategy includes a range of innovative programmes that combine risk reduction with institutional capacity building and enhanced citizen participation, demonstrating a focus on social innovation and environmental justice in adaptation.

Quito has successfully moved climate adaptation into the city’s main development agenda and that the plan, after taking a back seat to other municipal issues in recent years, has been making progress again.

Bogotá, Colombia
Bogotá’s goal is to replace thousands of buses with low-emissions vehicles by the end of 2014 in one of the most ambitious electric vehicle programmes in the world. Approximately 200 hybrid feeder buses are in production and expected to be running by the end of 2013. In addition, 46 electric taxis are to be piloted in Bogotá in 2013.

A conversion to electric vehicle technology is expected to reduce greenhouse gas emissions from taxis by over 70%.

The bus rapid transit (BRT) network introduced in 2000 has been expanded to carry 1.5 million passengers per day, and a third phase of 36km is under construction. It was the first major transport scheme in the world to earn Kyoto carbon credits.

The city is working closely with bus operators, and funders like the World Bank and IDB to examine and promote innovative financing options that could be scaled-up and imitated in cities worldwide.

Bogotá was the 2013 Winner for Urban Transportation in Siemens and the C40 City Climate Leadership Awards.

Seoul, South Korea
Seoul is working toward reducing its greenhouse gas emissions by 25% by 2020 and 40% by 2030 from 1990 levels by increasing the amount of energy generated from renewable energy, especially fuel cells.

The city is aiming to satisfy 20% of its energy needs with renewable energy by 2030, half of which should come from fuel cells – making up 10% of the city’s total energy demand. Its 2009 climate change master plan includes building 29 fuel cell power stations by 2014, providing 190 MW of power.

It was a finalist for Green Energy in Siemens and the C40 City Climate Leadership Awards 2013.

Smart Blocks also includes a series of workshops to be held around Australia between 2013 and 2016 on energy efficiency. Melbourne aims to be carbon neutral by 2020 and since 2010 its 1200 Buildings program has supported 10% of its building sector to start retrofitting.

It was the winner of Energy Efficient Built Environment category in the Siemens and the C40 City Climate Leadership Awards for its sustainable buildings program.

This is a tri-annual forum held to share new ideas and seek innovative solutions to the climate-related challenges facing the Western Cape, such as water scarcity, storm damages and the carbon intensity of the electricity supply.

In 2011, Cape Town successfully implemented a bus rapid transit (BRT) system of 16km in an area where there was previously no mass transit investment. It also opened Africa’s longest continuous bikeway alongside the BRT corridor.

Tokyo, Japan
Tokyo launched the world’s first urban cap-and-trade program in 2010, and it has been extremely successful. The cap was set at 6% for the first compliance period up to 2014, and 15% for the second compliance period (2015-2019).

Energy efﬁciency efforts have also been taken up by tenants and building owners, leading to an increased public awareness of climate change in the city.

In 2006, Tokyo announced its aim to cut emissions by 25% from 2000 levels by 2020. It was the winner for Finance and Economic Development category in the Siemens and the C40 City Climate Leadership Awards 2013.

Lagos, Nigeria
The development of two landfill gas projects, the first in Nigeria, at closed landfill sites is projected to prevent emissions of over 700,000 tonnes CO2 in the next decade. Steady progress in these projects in 2013 means that Lagos’ Epe solid waste management complex will begin composting and recycling solid waste in 2014, decreasing reliance on landfill disposal by more than half.

Lagos was a 2013 finalist for Waste Management in Siemens and the C40 City Climate Leadership Awards.

Inaugurated in April 2012, Metrobus Line 4 has reduced CO2 emissions by 35% compared to its predecessor and costs just $2 for a journey from the airport to the city center. The initiative features in the Sustania100 2013, and led to Mexico City being awarded the Institute for Transportation and Development Policy’s 2013 Sustainable Transport Award in conjunction with the city’s cycling and walking infrastructure, parking programme and public space renovation.