What effect will the IPCC report have on UN climate negotiations?

IPCC report says climate change is a threat, but nations unlikely to take warnings on board at next round of UN talks in Warsaw 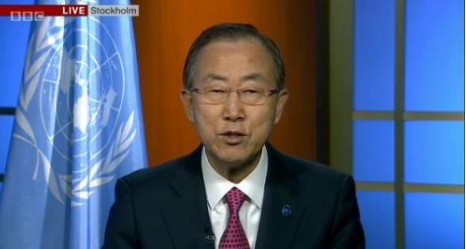 Ban Ki Moon told the IPCC press conference “The heat is on. We must act,” promising to drive talks forward in 2014

After the hype in Stockholm comes the sober reality.

The world’s leaders now have a wealth of information on the causes and likely consequences of climate change from the latest IPCC analysis – but what will they do about it?

Governments will meet in Warsaw from 11-22 November to develop a framework for a global emissions reduction deal.

This is scheduled to be signed off in Paris in 2015, but few seem confident it will be enough.

“Why is it that as the science is getting stronger and stronger the politics has got weaker and weaker?” he asked.

Ashton’s perspective is useful. He ran the Foreign Office’s climate department for six years until 2012, a period that encompassed the last IPCC report in 2007 and the catastrophic 2009 UN climate summit in Copenhagen.

It was also six years when atmospheric concentrations of carbon dioxide, methane, and nitrous oxide continued to rise to unprecedented levels.

If you put to one side the perfectly valid debate over levels of climate sensitivity and why warming has slowed in the past 15 years, one critical fact stands out.

The world is still on a trajectory to smash the 2C  warming above pre industrial levels that is likely to cause an acceleration of sea level rise and extreme weather.

“We know that the total effort to limit warming does not add up to what is needed to bend the emissions curve,” said UN climate chief Christiana Figueres in a statement.

“To steer humanity out of the high danger zone, governments must step up immediate climate action and craft an agreement in 2015 that helps to scale up and speed up the global response.”

The latest report does at least offer governments a guide on how much more pollution they can emit into the atmosphere.

Its ‘carbon budget’ to stay below the 2C level is between 800-880 gigatonnes of carbon.

By 2011 531 GT had been emitted, leaving 350 to play with, which as the Carbon Tracker Initiative reports is far less than global fossil fuel reserves.

In a statement emailed to RTCC, its chairman Jeremy Leggett said: “The IPCC’s carbon budget assessment recognises the amount of emissions to keep within 2°C is finite.

“This inclusion reinforces Carbon Tracker’s conclusion that significant fossil fuel reserves need to stay in the ground to limit climate change to a safe level.”

This suggests world leaders need to decide on an energy transition strategy, and fast.

The USA’s renewed engagement in this process offers a glimmer of hope.

China and the US are  the world’s biggest source of greenhouse gas emissions, accounting for around 40% of the global total.

Congress is unlikely to vote for any legally binding emissions targets at the UN, but President Obama is targeting polluting coal plants and energy efficiency standards using his executive powers.

US Secretary of State John Kerry issued a striking statement on the release of AR5.

“This isn’t a run of the mill report to be dumped in a filing cabinet. This isn’t a political document produced by politicians. It’s science,” he said.

“It builds on the most authoritative assessments of knowledge on climate change produced by scientists, who by profession are conservative because they must deal in what is observable, provable and reviewable by their peers.”

Kerry added: “If this isn’t an alarm bell, then I don’t know what one is. If ever there were an issue that demanded greater cooperation, partnership, and committed diplomacy, this is it.”

The bell is also ringing for EU climate chief Connie Hedegaard, architect of current efforts to develop a 2015 UN treaty.

“If your doctor was 95% sure you had a serious disease, you would immediately start looking for the cure,” she says. “Why should we take bigger risks when it’s the health of our planet at stake?”

Despite these strong words, critics say the EU and USA are not doing enough to cut their own carbon footprint, which dwarf those of developing countries.

The short-term future of some countries are also under threat.

The report warns that sea level rises of 26-82cm by 2100 are on the cards, although the report’s chairman Thomas Stocker did say there was a lack of scientific consensus on this.

This 49-strong collective comprises of some of the most climate vulnerable countries on the planet. Sea level rises of the magnitude suggested could see Kiribati and the Marshall Islands slip beneath the Pacific.

Moses wants countries to re-engage with her group’s plan to drive technical and practical alternatives to the use of oil, gas and coal.

“The idea is to engage the experts and authorities responsible for carrying out emissions reductions plans on the ground – leading scientists, engineers, policy analysts, representatives from civil society, community organizations, and the private sector, and officials from relevant ministries – in a collaborative process capable of delivering measurable results in the timeframe required,” she says.

It’s a proposal that received warm backing at talks in June, perhaps because to a degree it de-politicised the process.

But after the carrot comes a stick. UN negotiations veteran Saleemul Huq runs the climate change group at the International Institute of Environment and Development.

He is the driving force behind moves from poorer nations to develop a climate compensation mechanism, also known as ‘loss and damage’.

It’s a bold and perhaps last-ditch strategy to force richer nations to the negotiating table, which has met with considerable resistance from the USA.

It worries rich nations because the ‘compensation’ projections are far higher than the economic costs of moving towards a low carbon economy.

“The IPCC assessment reports have been influential in galvanising global action to tackle the problem”, Huq says.

“The fifth assessment should be able to persuade governments to redouble their efforts at COP19 in Warsaw in November.”

The prospect of dividing up a global carbon budget should be enough to make most world leaders lie shivering in the small hours, contemplating resignation.

Warsaw is unlikely to see any movement on that, or any dramatic financial gestures from the Global North.

But this assessment, which was effectively signed off by every country under the UN umbrella, will underpin policymaking at a national level for the decades to come.

Two more IPCC reports are due out in 2014. One will detail specific climate impacts on agriculture, society and economies.

The other will offer solutions on what can be done, both from an adaptation and mitigation perspective.

This report could be the most important of the lot, coming before Ban Ki-moon’s world leaders summit in September 2014.

For John Ashton, the evidence is clear. But ahead of 2015 what the IPCC process may achieve is to generate new momentum with the people that matter.

“It requires difficult political choices and political establishments have found it easier to have a debate focusing on the science,” he says.

“It’s not at economic problem, a technology problem – it’s a political problem.”