Hurricane Ian could push insurers out of Florida

Facing huge claims and legal bills from climate-driven disasters, insurers may pull out of Florida or charge extremely high prices 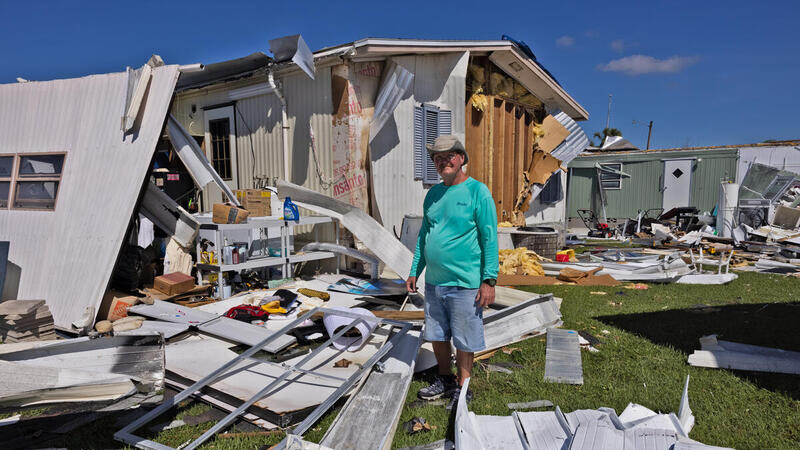 Tyler Bryant stands in front of his trailer home in Placida, Florida, which was destroyed by category 4 Hurricane Ian. (Photo: Julie Dermansky/Greenpeace)

The devastation wreaked by Hurricane Ian is posing a major threat to Florida’s already tumultuous insurance and property markets.

Analysts say the excessive costs from the storm could lead to insurers either avoiding Florida property altogether or charging sky-high premiums to homeowners.

The category four hurricane, which was one of the most powerful to ever make landfall in Florida, was also the US’ second-largest hurricane loss event on record, after Hurricane Katrina in 2005.

Privately insured losses in Florida are estimated at $46-67bn, not including flood insurance. Besides damaging homes and infrastructure, the hurricane also ruined orange farms in the largest producing state.

US media reports that Ian destroyed the financial security of many pensioners who invested their life savings in Florida properties that were lost to the hurricane.

Floridians already pay the highest home insurance premiums in the US, an average $4,321 per year – three times higher than the national average.

This is due to the high hurricane risk as well as “a manmade crisis generated by rampant roof replacement claim fraud schemes and runaway litigation,” Mark Friedlander, communications director of the Insurance Information Institute, told Climate Home News.

This year, Florida’s insurance premium renewals increased by a third on average, said Friedlander. Ian’s destruction is expected to hike these premiums again next year, by up to a half.

Flood damage is not covered under standard homeowners’ policies. The vast majority is covered by the federal government’s flood insurance programme. Homeowners could be hit with $10-$17bn in flooding losses that aren’t covered by their insurance policies, according to research firm CoreLogic. That’s $500-800 per Florida resident.

Ian has delivered a major blow to Florida’s insurance market which was already unstable and embroiled in financial difficulties.

Many of Florida’s insurers rely heavily on reinsurers, companies that insure insurance companies against claims exceeding their cash reserves.

Several property insurers have said they expect reinsurers to carry the majority of the burden. Allstate said it expects to recover 45% of its $671m losses from reinsurance and Progressive said that $1.2bn of its $1.4bn losses will be absorbed by reinsurers.

A report by credit ratings agency Moody’s warned that reinsurers will face heavy losses arising from Ian. Reinsurer Swiss Re has said it expects $1.3bn in insurance claims and forecast a third quarter net loss of $500m because of the damage caused by Ian.

Another reinsurer, Everest Re, said on Wednesday that it expects to report $600m in pre-tax losses from Ian in the third quarter.

Given the scale of the losses, primary insurers will share a significant part of the loss burden with reinsurers, the Moody’s report said.

In addition to covering the claims from Hurricane Ian, Friedlander said the insurance industry is expected to face “an excessive level of litigation”, with legal costs, including lawyers’ fees, reaching between $10-20bn.

“Many reinsurers have indicated they may no longer provide coverage to Florida insurers or will charge extremely high renewal rates, because of the state’s litigious environment,” he said. Bankers Insurance Group and Lexington Insurance Company,  two regional firms, said before the hurricane that they are withdrawing from the market and six Florida property insurers have declared insolvency this year.

The US Treasury Secretary Janet Yellen referred to Ian’s impact this week when she launched an assessment into how worsening extreme weather is impacting the cost of insurance. “The recent impacts in Florida from Hurricane Ian demonstrate the critical nature of this work and the need for an increased understanding of insurance market vulnerabilities in the United States,” Yellen said.

The treasury department announced it would request data at postcode level from US insurance companies regarding their prices and policies.

The data would provide the insurance office with “consistent, granular, and comparable insurance data needed to help assess the potential for major disruptions of private insurance coverage in regions of the country that are particularly vulnerable to the impacts of climate change,” the treasury said in a statement.

Read more on: US | Hurricane Ian | Insurance US