Comment: As talks on a global deal to protect nature begin in Nairobi, Kenya, countries need to create a new conservation designation for Indigenous Peoples’ land 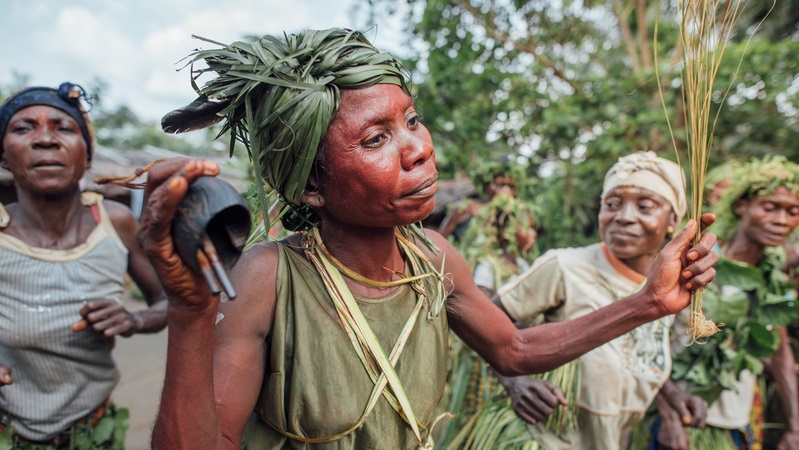 Women in the remote village of Lokolama in the DR Congo rainforest welcome an international research team working to identify the presence of tropical petalands in the area in 2017 (Photo: Kevin McElvaney / Greenpeace)

The world is waking up to a tragic fact, year on year: deforestation is happening on a scale and at a rate that amounts to nature collapsing.

Some rainforests are already emitting more carbon dioxide than they absorb, further destabilising the global climate. At current trends, all primary rainforest in the Congo basin – the world’s second largest rainforest – could be cleared by the end of the century.

Given the grim state of the world’s forests, we need to seize every opportunity to do right with nature.

The UN Convention on Biological Diversity summit, or Cop15, relocated to Montreal, Canada, in December this year could be the “Paris moment” for biodiversity, as the 2015 Paris Agreement was for climate.

In Montreal, countries are expected to agree on a global framework to halt biodiversity loss this decade.

As biodiversity negotiators convene this week in Nairobi, Kenya, to prepare the meeting, they must wake up to another crucial truth: Indigenous Peoples and local communities are better at managing their lands than anyone else.

Data gathered across countries and continents consistently shows that when people living in forests are left to run them, the result is better-protected ecosystems and biodiversity than any other conservation model.

Deforestation industries – whether loggers or agribusiness – are well aware of this. While they clear forests, Indigenous Peoples and local communities are being displaced, abused, and murdered.

Delegations attending the biodiversity Cop15 summit are expected to discuss safeguards for recognising the rights and roles of Indigenous Peoples and local communities in conserving nature. So far, discussions haven’t included any concrete commitments.

To protect biodiversity effectively, and ethically, Cop15 must recognise tangible protections for the rights of Indigenous Peoples. That should include creating a new and separate category for Indigenous land, one that puts them as the centre of decision-making and funding.

Currently, there exists two types of conservation designation: protected areas and other effective area-based conservation measures when conservation is supposedly achieved even though it isn’t the formal objective of land management.

In Nairobi, countries should agree to create a third category for land which is fully governed by Indigenous Peoples and local communities.

In all protected areas where Indigenous Peoples and local communities live, they must be fully involved in the decision-making processes and management of the area.

The threats are not just the chainsaws and bulldozers of multinational companies seeking to extract natural resources, but “fortress conservation”, which closes off land and forests to human activities.

There is a difficult history not only between forest dwelling Indigenous Peoples and local communities and industries but also with traditional conservationists. Unlike traditional conservation NGOs or government-run parks’ administrators, Indigenous Peoples and local communities consider the forest their home.

Fortress conservation is the result of the exclusion of Indigenous Peoples’ rights from conservation frameworks. This has often led to chronic human right abuses in the form of rape, torture, and killing of forest communities by so-called eco-guards, which has been well-documented in Central Africa.

The latest confrontation took place shortly before the start of the Nairobi talks, when Tanzanian authorities were seen opening fire on Maasai communities opposing the demarcation of a game reserve, which would ban all human settlements and grazing in the area.

The global deal for nature due to be agreed in Montreal later this year is an opportunity to shun this type of fortress conservation and embrace change.

That means formally recognising the rights of Indigenous Peoples to their ancestral lands and natural resources.

In recent years, some progress has been made. In the Democratic Republic of Congo, it is now possible for forest communities to formally receive rights over a forest concession.

But the Congolese government and donor countries need to do more to make this option accessible to communities.

And across the world, there are still many billions of dollars invested in sustaining this problematic “fortress conservation” model.

Negotiations taking place in Nairobi this week must be a turning point for Indigenous People’s rights in biodiversity conservation. Allowing NGOs and government agencies to remain the primary beneficiaries of conservation funds would be a huge failure of the UN Biodiversity talks.

The Cop15 biodiversity summit is the moment to lay the groundwork for a new system that protects forests, wildlife and people, which is both effective and just.

Irene Wabiwa Betoko is the international project leader for the Congo Basin forest at Greenpeace Africa.