Comment: While the country suffers from extreme heat, Delhi’s budget for adaptation grants has shrunk and international support is falling short 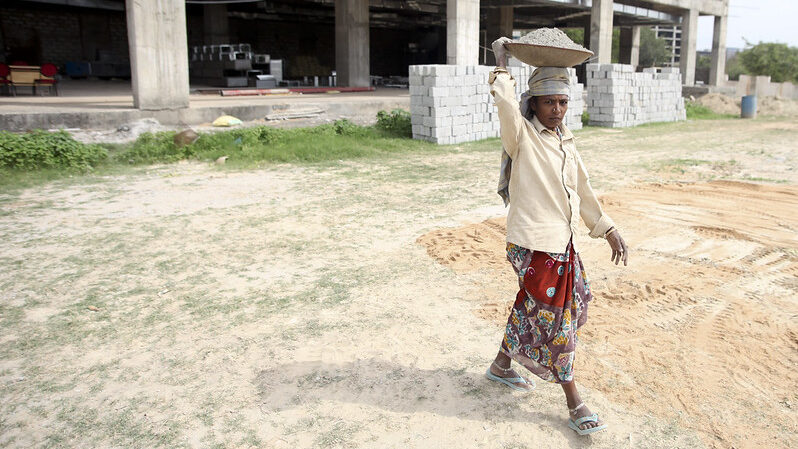 Day labourers cannot afford to lose income when it is too hot to work (Pic: Nicolas Merguet/Flickr)

This March was India’s hottest since records began 122 years ago. The temperature hit 49C in several states of India by the end of May.

The increasing frequency of heatwaves and their early arrival have had enormous economic and health impacts, especially on agricultural communities and daily wage labourers. People employed in the informal sectors such as rickshaw pullers, domestic helpers and daily contractors risked heat stroke if they worked during the hottest hours and lost critical income if they rested instead.

Sporadic and prolonged summers are making monsoon season unpredictable, forcing farmers to adapt their production cycle every season. This year’s harsh summer has resulted in sudden pressure on power demand and coal shortages, pushing the country into a severe electricity crisis.

As if unprecedented heat was not enough to deal with, the northeastern state of Assam has witnessed torrential pre-monsoon rainfall causing floods all over the state. The overflowing of Brahmaputra River, one of the major rivers passing through India, has overrun close to 1,500 villages and affected nearly 500,000 people.

While the National Disaster Management Authority of India (NDMA) has started to rehabilitate the affected people, a sudden migration to nearby cities has put pressure on the local administrations.

All this shows why adapting to the impacts of climate change deserves equal attention to cutting emissions.

India came out with National Adaptation Fund for Climate Change (NAFCC) in 2015 with a budget allocation of 350 crore rupees ($4.4 billion). But research by The Indian Express found that the grants released from NAFCC since 2017 have been declining. In 2017-18, the government released 115.36 crores, falling to 42.94 crores 2020-21 and just 27.76 crores this year. This declining public funding is one of many reasons for the failure of several states to implement their adaptation strategies.

Developed nations have, yet so far, failed to fill the gap. UNCTADs trade and development report 2021 estimates that annual climate adaptation costs in the developing world could reach up to $300bn by 2030 and $500bn by 2050. At the last count, in 2019 rich countries contributed $20.1bn. That figure may be inflated; campaigners have found many examples of development projects labelled as “adaptation” that had little to do with the climate.

They need to meet their promises to scale up support and follow the evidence on what works.

In 2013, after Ahmedabad, Gujurat suffered 1,300 excess deaths due to heatwaves in 2010, authorities implemented a heat health adaptation plan. It is credited with preventing an estimated 1,190 deaths a year since then.

The World Meteorological Organization along with the India Meteorological Department have set up early warning systems in heatwave-prone areas. These are a start but do not go far enough to shield vulnerable communities. Slumdwellers and outside workers cannot afford to stop earning money even for a day.

The government has to come up with short- and long-term solutions that not only protect people from health hazards but also provide sustainable livelihoods in these vulnerable communities.

Officials should seek out transnational partnerships with other environmental ministries and agencies like GIZ or Teri to share knowledge and strategies.

Failure to act will lead to more avoidable suffering. The time for India to invest in climate adaptation is now.

Skand Agarwal is master’s student at the School of Transnational Governance based at the European University Institute in Florence, Italy.