Comment: Millions of people in vulnerable nations are experiencing losses and damages from climate impacts. To help them, we need to break the deadlock at UN climate talks 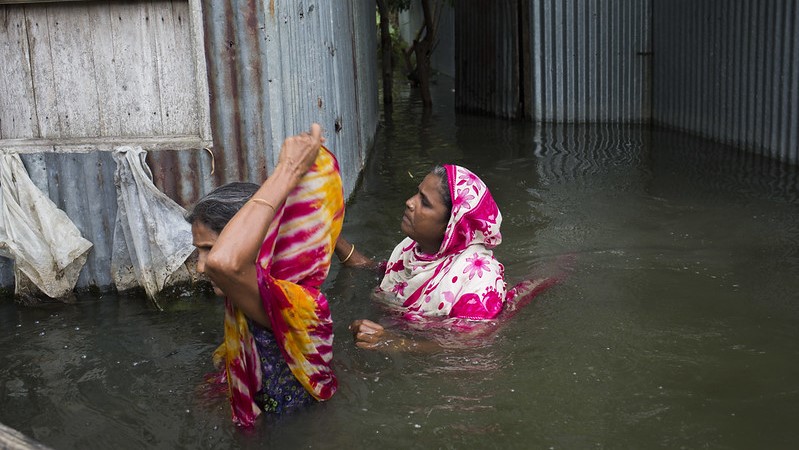 Loss and damage refers to harms and destruction caused by climate change impacts that cannot be avoided through mitigation or adaptation. It has been on the agenda of UN negotiations for many years, but the discussions on how to take action has been polarised in a way, which has prevented significant progress.

The Danish delegation visited Satkhira district to engage in dialogue with local people living on the front line of climate change. Broken embankments, salt water flash floods that wash away houses, salt intrusion in drinking water, low yields due to severe droughts or water logging after cyclones are increasingly a challenge.

The district of Satkhira is not alone. A recent report from DanChurchAid illustrates how poor households in southeast Asia must take loans when their belongings are washed away by flash floods, river erosion or the like.

Many have already migrated to slums in cities, as rebuilding and reconstruction is not an option. In Bangladesh, more than 50 million people are expected to be affected by climate change over the next 40 years, putting pressure on natural resources, biodiversity, and local communities.

The economic impact of climate related disasters is huge. Studies indicate that costs related to loss and damage will rise to between $290 billion and $580 billion a year by 2030.

Other effects cannot be counted in money. People risk losing culture, history, and even identities, as climate change becomes a driver for displacement and migration. Entire regions will become uninhabitable. It is clear that there is a problem that we need to find joint solutions to.

While we all recognise the need for urgent action, a constructive dialogue on how to address the issue of loss and damage is still largely missing. We need to unlock the deadlocks in the climate negotiations and avoid discussions becoming even more polarised.

And in partnerships between governments, civil society and other sectors we need to find practical ways to address the risk of loss and damage facing millions of people globally. We must work towards making the Glasgow Dialogue on financing arrangements for loss and damage result in something concrete and deliverable.

The bill for loss and damage too often ends up being footed by the public budgets of the worst affected countries. The Climate Vulnerable Forum – which Bangladesh now chairs – announced last month through its V20 ministerial that it will pioneer its own international loss and damage financing mechanism to direct funds to communities hardest hit by climate disasters.

The Santiago Network for Loss and Damage can also help catalyse support for loss and damage. We are all keen to get it up and running soonest.

This is why Denmark hosted the international UN Climate Change workshop on the operationalisation of the network in Copenhagen last week and it is why we all engage actively in the debate.

This is also the reason why Denmark has pledged a contribution to its technical assistance fund. We are confident that the workshop helped paved the way for making the network operational at Cop27.

Furthermore, Denmark will together with Egypt and UK, host a ministerial meeting about the implementation of the Glasgow Climate Pact this week in Copenhagen. The aim is to identify “deliverables” on the existing agreements, including on loss and damage – and to make sure that the results from the negotiation rooms are turned into results on the ground.

We need to get everyone on board if we want to halt climate change. We need constructive dialogue and concrete solutions. And we need to foster new innovative partnerships across sectors.

Only through dialogue, cooperation, and sharing of ideas, information, and experiences, we will be able to advance concrete initiatives that can help people, communities, and countries at risk. Our goal is to turn dead-end discussions into cooperation and action helping us all to manage climate induced loss and damage.