Sponsored content: Monitoring from space can guide action to tackle deforestation, carbon dioxide and methane emissions, and show the impact of adaptation measures 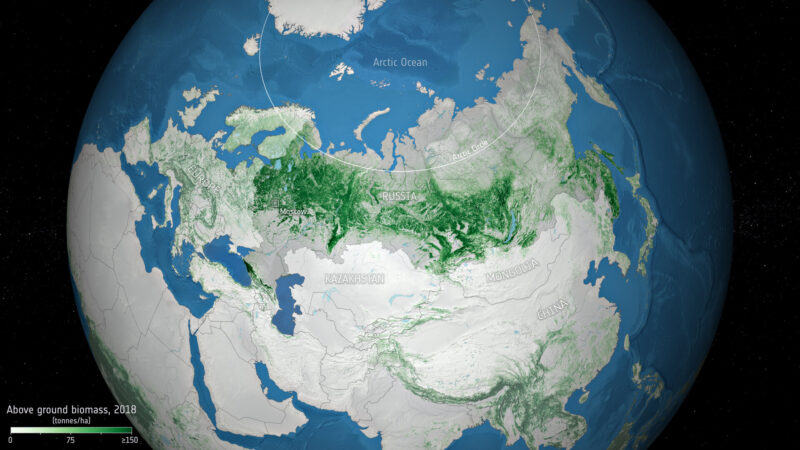 At last month’s Cop26 summit, countries adopted the Glasgow Climate Pact, setting the agenda for the next decade on how to respond to the threats posed by climate change.

Those words are only as good as the action that follows. To deliver on their commitments, decision makers need reliable data – and observations made from space can help. Here’s how.

The importance of science to inform climate action and policymaking is more prominent in the Glasgow pact than earlier summit statements. Observations from satellites are a crucial component of climate monitoring and research. Their consistent, systematic and global measurements of the Earth’s climate system – in particular in remote regions of the planet – are essential to our understanding of the climate crisis.

For example, they form the basis for our understanding of the decline in Arctic sea ice, the accelerating ice loss from ice sheets and glaciers worldwide, and global sea level rise in recent decades, summarised in the IPCC’s 6th Assessment Report.

The programme supports R&D to merge data from multiple satellite missions to generate a suite of long-term climate records required by climate researchers and climate services, and ultimately to inform policymaking and climate action.

“The latest IPCC report clearly demonstrates the value of ESA’s satellite missions and programmes in providing the evidence base to develop our understanding of climate change and supporting how the international community roadmap climate action,” said Josef Aschbacher, ESA’s Director General. “These hard facts are also highly appreciated by political decision makers in Europe and globally.”

Countries agreed to pledge deeper emissions cuts to their carbon dioxide emissions next year, with the aim of “pursuing efforts to limit the temperature increase to 1.5C”.

It is estimated that current pledges will lead to 2.4C of global warming. Satellites directly measure the concentration of carbon dioxide in the atmosphere, and several methods have been developed to use these data to quantify anthropogenic emissions at ground-level.

These “top-down” estimates can be compared with conventional national inventory “bottom-up” emissions reporting. In doing so, this approach can help fill in missing information and verify and keep track of progress towards each country’s carbon dioxide emissions reductions commitment.

Already, satellite missions are providing crucial information for detecting global and regional trends in carbon dioxide levels, for example to produce the records provided by the Copernicus Climate Change Service.  ESA CCI is pioneering research in how to use space data to improve estimates of surface fluxes between the atmosphere, land and ocean to compare to national-scale estimates, through its RECCAP-2 project.

Capability for detecting emissions from human activity will be significantly improved by the launch of new missions in the next few years, particularly the Copernicus anthropogenic CO2 Monitoring satellite constellation in 2025. Meanwhile research by ESA CCI’s greenhouse gas project continues to improve the global, long-term records of atmospheric carbon dioxide.

In the first week of Cop26, 109 countries pledged to cut methane emissions by 30% by 2030 and move towards the best inventory methodologies to quantify emissions. To implement it, the commitment was accompanied by $328m to expand technical support.

Satellite measurements of methane are more advanced than for carbon dioxide, thanks to the dense coverage and high accuracy and spatial resolution provided by the Copernicus Sentinel 5-P mission launched in 2017.

Its free, open-access data are used to help identify opportunities for cutting methane emissions by finding major new sources of methane. These regions can then be examined in greater detail using data from commercial satellites such as GHGSat to attribute the emissions to specific facilities. Converting the atmospheric measurements to methane fluxes at ground-level could also help validate estimates of emissions by national inventory agencies, and track progress towards the methane pledge.

“Data from satellites such as Copernicus Sentinel-5P will be an essential ingredient to implement the Cop26 Methane Pledge. The satellite measurements need to be integrated with other sources to form a complete picture for mitigation purposes,” says Manfredi Caltagirone, the Head of the International Methane Emissions Observatory set up by UNEP to provide a trusted and rigorous source of methane emissions data.

ESA has been pioneering methods for tracking the leaks of methane, as well as improving methods for long-term methane records at a global-scale to drive down uncertainties. Global datasets of atmospheric methane are provided operationally by the Copernicus Climate Change Service.

Adaptation was a major emphasis in Glasgow, and developed countries agreed to double their provision of finance to developing countries from 2019 levels by 2025.

The Glasgow Pact emphasises the urgency of scaling up action and support “including finance, capacity building and technology transfer, to enhance adaptive capacity, strengthen resilience and reduce vulnerability” to the growing threat of climate and weather extremes with rising temperatures.

Under the Paris Agreement, parties are invited to submit their intentions in this area as National Adaptation Plans. To quality for financial support, developing countries must undertake formal monitoring of their progress as part of the 5-yearly UNFCCC Global Stocktake.

For example, space data can trace the impact of urban greening in reducing extremes of urban heat, track the recovery of soils and vegetation due to overgrazing, or inform coastal communities on the risks posed by rising sea levels and erosion rates, with ESA’s EO4SD-Urban project providing information down to 1m.

ESA’s EO4SD climate resilience cluster, working with International Financing Institutions and their client countries, is building capacity in the use of Earth observations to identify and respond to the risks posed by climate change. The projects use the best available science to help countries to secure valuable finance to strengthen their climate resilience.

A new ESA initiative in partnership with the World Bank and Asian Development Bank called Space in Support of International Development Assistance aims to grow the wide-scale, systematic use of satellite EO in working practices and finances for development assistance operations. Much of this work will focus on skills and training in the production of operational products derived from satellite data, including disaster resilience

More than 100 global leaders at Cop26 pledged to end and reverse deforestation by 2030 to address the climate crisis. The Glasgow pact emphasises ‘the importance of protecting, conserving and restoring nature and ecosystems to achieve the Paris Agreement temperature goal, including through forests and other terrestrial and marine ecosystems acting as sinks and reservoirs of greenhouse gases’.

The signatories pledging to end deforestation cover 85% of the world’s forests, including Canada, Brazil, Russia, Indonesia and the Democratic Republic of the Congo.

Monitoring progress on this declaration, though, is crucial – a voluntary agreement made in New York in 2014 to half deforestation by 2020 is widely recognised as a failure. Space data can play a huge role in tracking progress and holding pledges to account.

Free and open access data from Copernicus Sentinel-1 – an imaging radar mission – can be used to detect clear-cut and partial-cut timber harvesting as well as scars from forest fires. And ESA’s upcoming BIOMASS mission, due to launch in 2023, will provide unprecedented accuracy in measuring the carbon-rich biomass stored deep inside the forest layers.

ESA has also generated a series of global above ground biomass maps spanning the decade 2010-2020 to support forest management, emissions reduction and understanding of the carbon cycle.

Generated by a research team as part of ESA’s Climate Change Initiative, the science lead Shaun Quegan highlighted the value of space for monitoring forests in a public event at Cop26 on 6 Nov 2021.