Sponsored content: Using a combination of data from different satellites, scientists are predicting the amount of above-ground biomass stored in the world’s forests 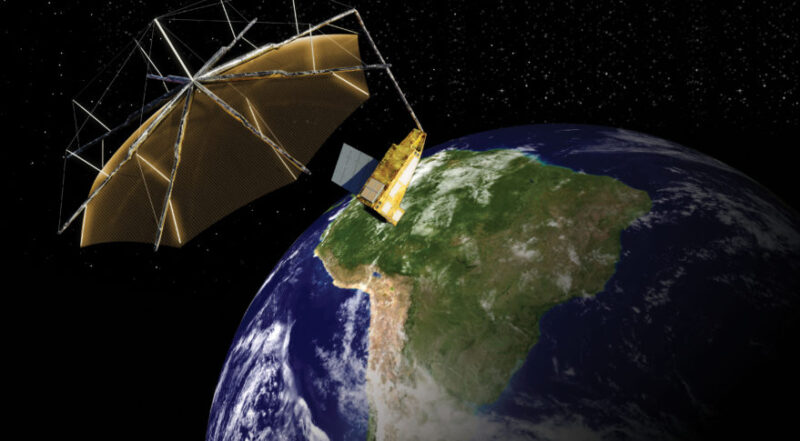 Researchers are tracking the change in above-ground biomass with satellites to inform carbon cycling and global climate models.

With the release of the European Space Agency’s Climate Change Initiative 2020 dataset, adding to its existing collection, there is now a decade’s worth of global maps which can be used to track recent changes in forest biomass.

As vegetation grows and plants perform photosynthesis, carbon dioxide is pulled from the atmosphere and stored as biomass, which is released back into the air during disturbances, deforestation, and wildfires. Forests are the largest store of carbon on Earth’s land, but their ability to sequester is being strained due to human exploitation.

Above-ground biomass is considered one of the 54 Essential Climate Variables listed by the Global Climate Observing System and further research on the role of forest carbon storage will help to predict changes in future biomass and its influence on the Earth system.

“Forests play a crucial role in the terrestrial carbon cycle by absorbing and storing large amounts of atmospheric carbon dioxide. Observing forests from space provides unique and transparent information to estimate their biomass and how it is changing,” said Frank Martin Seifert, leading on the ESA project.

Using a combination of data, including ESA’s Copernicus Sentinel-1 mission and Envisat’s ASAR instrument, and the Advanced Land Observing Satellite from the Japan Aerospace Exploration Agency (JAXA), new maps across separate years are providing a global view of above-ground biomass distribution and spatial density at a resolution of 100 metres.

“JAXA is proud to work with ESA to produce these critically important global biomass maps by providing JAXA’s long-term archive of L-band SAR data, collected since 1992. This legacy will be continued in the future by the ALOS-4 mission,” said Osamu Ochiai, Senior Engineer at JAXA.

ESA are also working alongside NASA on the Multi-Mission Algorithm and Analysis Platform (MAAP), a collaborative project designed to support above-ground biomass research by bringing together data, algorithms, and computing capabilities through a centralised cloud sharing system.

MAAP is used in an ongoing harmonisation exercise to resolve discrepancies between global maps from CCI biomass, JPL and NASA’s GEDI mission to produce harmonised estimates of biomass and uncertainty at a policy-relevant, jurisdictional-level scale.

“Combining these new data is anticipated to increase the consistency of these high-resolution maps and move a step closer towards tracking changes and direct estimation of gross gains and losses of above ground biomass at scale,” said Shaun Quegan, the project’s science lead.

In 2023, ESA plans to launch a satellite specifically designed for monitoring forest biomass and will be the first ever craft to carry a P-band radar, the longest wavelength available for Earth observation.

Making a polar sun-synchronous orbit at an altitude of 666 km, the satellite’s radar will not only be able to “see through” clouds, but the canopy layer itself, allowing for a comprehensive measurement of all biomass types, including branches, leaves and smaller woody shrubs.

Having recently finished being constructed, the craft has undergone a number of tests to simulate its response to vibrations, shocks, and temperature variations, some of the many challenges it will face during lift-off and in space.

“The biomass mission takes forest counting to a new level and is ESA’s contribution to the ‘golden age’ of biomass related missions from several space agencies,” said ESA’s mission manager for biomass Klaus Scipal, adding, “together we will further reduce uncertainties in the terrestrial carbon cycle”.

Information gained from satellite biomass monitoring is important not only for the advancement of science, but to inform national and global policies in commitments to reduce emissions and conserve forests.

Raising ambition activities like the “Glasgow Leaders’ Declaration on Forests and Land Use” at Cop26, as well as engagements in the global stocktake of the Paris Agreement, will thus benefit from an increased understanding of the carbon pool contained in the world’s vegetation.

“Repeated and consistent measurements from space help to track change in biomass distribution and density over time, and in turn informs policies that promote carbon emission reduction and forest conservation initiatives such as the United Nations Reducing Emissions from Deforestation and Degradation programme,” said Richard Lucas, project manager of CCI Biomass.

“All of these biomes are experiencing unprecedented changes associated with human activities, which are being exacerbated by climate change,” Lucas explained, “knowing how much carbon these forests hold and how this has changed – and is changing – is a major step towards ensuring their long-term future and addressing climate change.”

Together with the National Centre for Earth Observation the European Space Agency hosted a live session at COP26 called ‘Monitoring the lungs of the world from space – what satellites reveal about carbon storage in the forests of the Earth’, at the Science Show Theatre, and broadcast on the COP26 YouTube Channel.