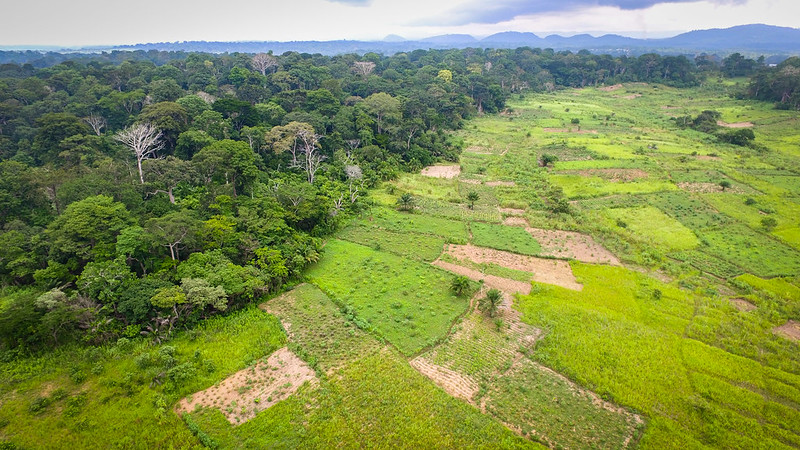 Farms border forest in Bokito, Cameroon. Most carbon offset projects are expected to come from planting or protecting trees (Photo by Mokhamad Edliadi/CIFOR)

By Kate Dooley and Kate Mackenzie

The Cop26 climate change summit in Glasgow must address one of the most difficult aspects of the Paris Agreement rules: Article 6.

This part of the 2015 Agreement deals with international cooperation, including “international transfer of mitigation outcomes” – commonly interpreted as trading carbon.

If a consensus is reached in Glasgow, Article 6 could determine how an emissions reduction achieved in one country can be sold to another country and, potentially, to a company.

In the past year companies wanting to demonstrate their climate credentials, together with banks and commodity traders eager to profit from helping them, have waded into this troubled area.

The Taskforce on Scaling Voluntary Carbon Markets – instigated by UNFCCC envoy Mark Carney last year and counting many large banks and corporations in its membership – aims to “scale up” a “deep, liquid” voluntary carbon offset market to be worth $100bn by 2030.

Their plan has been criticised for its potential to scale up greenwashing to massive proportions. Perhaps worse, it also threatens to weaken an already fragile global negotiation which has been a stumbling block for climate negotiations for the past several years – and in a year in which agreement is particularly critical.

The taskforce assumes most of the offsets traded will involve changing the way land is used – tree planting and conservation – based on extremely optimistic assumptions about how much carbon can be captured this way.

Voluntary carbon offsets – the sort used in “net zero” claims by oil companies and added as optional extras in airline tickets – have been in use for well over a decade.

While the renewable energy and nature-based projects they fund can be worthwhile, voluntary offsets have been revealed in numerous cases to overstate their environmental impact, and caused harm to local communities. Offsets do little to arrest climate change.

When trees die or are burnt, the carbon dioxide they’ve “fixed” is released back into the atmosphere. Building more renewable energy, another popular project for offsets, only avoids worsening the problem.

Removing carbon dioxide from the air is important to limit global heating, but it not simple, cheap or endlessly “scalable”. Allowing companies to use weak offsets in their “net zero” pledges reduces the pressure on them to actually cut their own emissions.

Why then, does the Paris Agreement have a provision for trading carbon at all? The origins are in the Kyoto Protocol, which created the Clean Development Mechanism, allowing developing countries to draw finance from wealthy countries to support climate-related projects.

The inclusion of such transfer mechanisms in the Paris rulebook was contentious from the start. Negotiations on a new mechanism to replace those under Kyoto commenced in 2011, but made little progress.

Arriving in Paris for the critical climate meeting in late 2015, country delegates had no agreed text on the topic; yet “Article 6” appeared in the Paris Agreement in the late stages of the talks. There are divergent views over what Article 6 even refers to.

In the two years since, countries remain divided. At stake are questions over how to avoid “double-counting” of emissions reduction efforts, how to ensure carbon trading contributes to a genuine overall reduction in global emissions, and whether a levy would be applied to proceeds from carbon trading to finance adaptation in developing nations.

Article 6 now remains the last outstanding item of the Paris rulebook, threatening to distract from important political outcomes such as improved 2030 climate targets. With difficulties for delegates from the global south to even travel to Glasgow and tightly restricted access to negotiating rooms for those who made it, participation in this Cop is perhaps the most limited ever.

Comment: Why I refuse to collude with polluters in the carbon offsetting lie

The giants of the finance, agriculture and commodity trading worlds represented in the TSVCM are rapidly creating their own rulebook, and have declined to take a position on the sensitive aspects of Article 6.

At the Cops, developing countries seek funds for clean energy, development, and resilience to climate damage that’s mostly caused by the global north. Many have also been hit hard by Covid. The prospect of funds from carbon markets will be appealing.

But if commercial interests set the parameters of an Article 6 deal, they risk allowing big loopholes that erode the credibility of the Paris Agreement.

Business players should stop and question the true role that offsets will play in mitigating the climate crisis. And parties to the Paris Agreement should take care to avoid letting delicate multilateral negotiations become influenced by hasty commercial efforts to blaze a trail.

If negotiators cannot agree on robust environmental integrity and human rights safeguards, no deal would be the best outcome from Glasgow.

Dr Kate Dooley is a research fellow at Melbourne University’s Climate & Energy College. She has worked globally with environmental movements and non-government organisations, focusing on the intersection of forest governance and climate policy, and has followed the UNFCCC negotiations since 2009.

Kate Mackenzie is a fellow at the Centre for Policy Development, a non-partisan Australian thinktank, and an independent writer, researcher and communicator on climate change and finance.