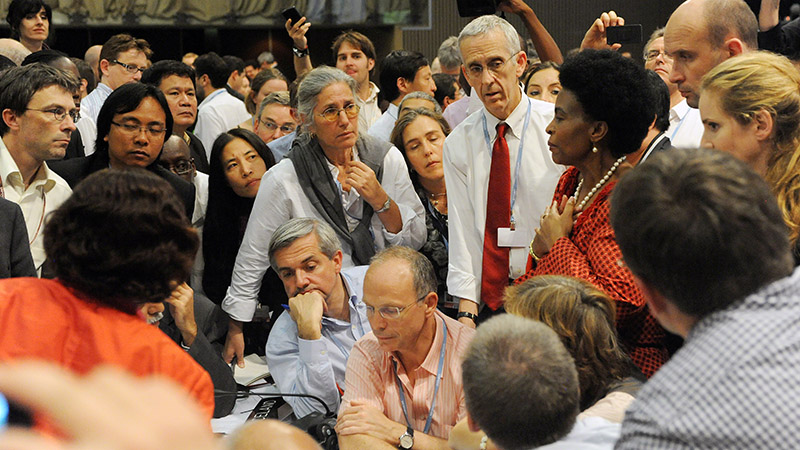 “Worse than the Daily Mail.”

Those words rang in my ears as I trudged out of the UN’s shipping HQ in London six years ago, after a 45 minute bollocking from their media team.

The reason for the comparison to a UK mass market newspaper with a reputation for sensationalism? Climate Home had opened the door on the opaque, fusty world of global shipping talks – where old men from Lancashire represent Pacific islands.

In their view, reporters were lucky to be allowed into UN venues. Lucky to listen to discussions on ship design, propeller sizes and go-fast paints.

Perish the thought anyone actually reveal the outsized influence of industry lobbyists on matters of global public interest and how it was holding back action to tackle shipping’s carbon footprint.

The two-year ban on current editor Megan Darby was well worth the hit – it was a story that was made for Climate Home – and kickstarted a process that has seen the International Maritime Organization become (slowly and unwillingly) increasingly transparent.

The site didn’t always make a splash. Our launch as RTCC in September 2011 was barely noticed – led by an editor (me) who had spent 10 years covering sport at the BBC and a rookie team of journalists thrust into the climate maelstrom.

Our first trip to a UN climate summit in 2011 was – to put it kindly – a limited success. To veterans of Cops they appear the centre of the universe. To outsiders they appear deeply weird conventions with secret languages, privileged access and limited output.

Week one saw youth campaigners decide we were infiltrators from the fossil fuel lobby – due to the BP Target Neutral sponsorship we carried – branding the team a bunch of oil supporting shills. We quickly realised to establish any credibility in the space, we’d have to resist the lure of big oil’s deep pockets.

To journalists they can appear events designed to break you. The Durban COP17 summit ran 48 hours into overtime. I ran out of shirts, pants, socks. The convention centre ran out of food. Greenpeace started a riot.

By 6am when the deal was struck I was almost certainly hallucinating.

Fortunately the Telegraph’s Lou Gray and PA’s Emily Beament were there to guide a novice climate hack to safety. Without them I would still be gently weeping somewhere in the bowels of the Luthuli International Convention Centre.

Of course, the sheer joy of being a journalist (apart from the fast cars and private jets) is getting stuck listening to wild theories – and there are plenty of those in the climate space.

Take the Egyptian who wanted to fire vast mattresses into space to block solar rays and the man who wanted to block the straits of Gibraltar to create the world’s biggest hydroelectric dam.

I also recall a plump Australian millionaire whose clean energy plan involved burning coal to create gas and an Apollo 7 astronaut called Walt Cunningham – who repeatedly hunted me down at Cops to tell me it was all a hoax.

In truth, reporting in climate day in day out takes you close to a form of madness – and it’s easy to forget that in the lifetime of Climate Home News there have been huge shifts in consensus on the science, advances in clean energy and public awareness.

None of it is enough, but we are light years on from 2014, when Sophie Yeo reported on a secret dinner between leading climate scientists Ed Hawkins, Richard Betts and Tamsin Edwards and a bunch of now irrelevant climate sceptics.

In those years, Climate Home News has grown and thrived, with a stellar array of hacks writing for the platform, including Lou Gray, ex editor Karl Mathiesen, Lou del Bello, Alister Doyle, Leo Barasi and the current team of Megan, Chloe, Joe and Isabelle.

Climate justice: tales of resilience from around the world

What I’m most proud of is the way Climate Home has given voices from the developing world a platform – from the 2015 Africa Files series to present-day coverage from Afghanistan, Barbados and beyond.

It’s easy to forget climate change has already arrived in all its savage fury in many parts of the world – and that’s why Climate Home’s focus and commitment to those regions is a vital global service.

It also reminds me of the closing words from Michael Zammit Cutajar – the UN’s first ever climate chief – who gave the address at the launch party 10 years ago.

“Climate change was a glimmer on the horizon of international concern when the 1972 Stockholm Conference put the ‘human environment’ on the global agenda,” he said.

“Only one foreign head of government participated in that event: the Prime Minister of India, Indira Gandhi. She proclaimed then that poverty was the worst form of pollution. We can still say that today.”