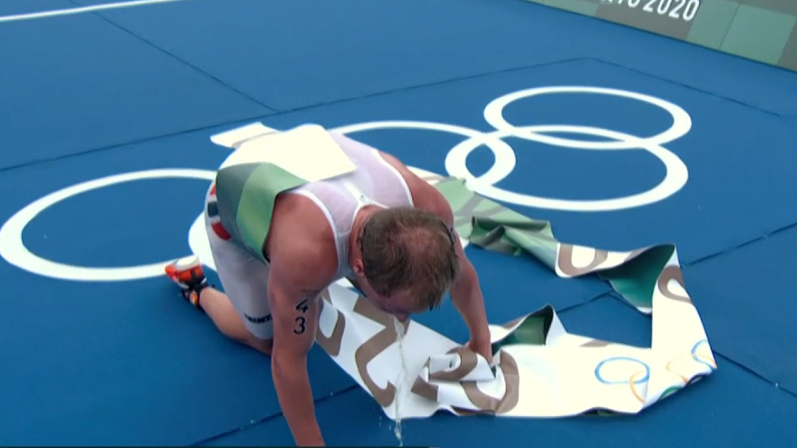 The Tokyo Olympics have been described as the “hottest games ever” with athletes fainting, leaving the competition in wheelchairs and asking what happens if they die while competing.

High temperatures were between 29-33C (84-91F) every day since they started on 23 July. Humidity frequently took the wet bulb temperature, a combined measure, to a level the Japanese ministry of environment’s website labels “danger” in bright red text.

Climate change and the urban heat island effect, in which cities warm up more than the countryside, have made Tokyo 2.86C hotter now than it was in 1900. Temperatures above 30C (86F) are increasingly common in the summer.

The first notable casualty of the heat was Russian archer Svetlana Gomboeva, who collapsed while checking her scores. She had tried to prepare for the climate by training in Vladivostock, a Russian city just 1,000 km from Japan. But her coach told reporters: “She couldn’t stand a whole day out in the heat”.

Russian archer Svetlana Gomboeva fainted during Olympic qualifying as intense heat in Tokyo was in the spotlight.

Svetlana Gomboeva collapsed while checking her scores. She regained consciousness and left on a stretcher.#bbcolympics

Mike Tipton is a professor in Human and Applied Physiology at the University of Portsmouth who helped the UK’s triathlon team prepare for the heat. “The problem that Svetlana had was absolutely predictable,” he told Climate Home News.

“If you stand up in a warm environment for a long period of time and you’re sweating and you’re becoming dehydrated and the blood flow to the skin is going up and up and up, you can have a fairly drastic fall in blood pressure and that’s seen with people getting light-headed and feeling faint,” he said.

In fact, he said, standing still can make the problem worse because contracting your leg muscles as you move helps maintain blood pressure and blood flow back to heart.

The second major problem was in the more physically intense sport of tennis. At the end of the first set of her quarter-final match, Spanish player Paula Badosa suffered heatstroke and eventually left the court in a wheelchair.

On the same day, Russian Daniil Medvedev was visibly struggling during his third-round match and had to call the physio. The umpire asked him if he was OK and he replied: ““If I die, is the [International Tennis Federation] going to take responsibility?”

He went on to win the game but told reporters: “Even from the first set, I didn’t feel good enough with my breathing. That’s why I called the physio. I felt like my diaphragm was blocked.” In the second set, he said: “I just had darkness in my eyes, like between every point, I didn’t know what to do to feel better. Like I was bending over and I couldn’t get my breath together so I was ready to just fall down on the court.”

Asked if Medvedev could have died, Tipton said: “He could certainly collapse. One would hope that there would be sufficient paramedical support around the courts that if he did collapse through over-heating he could quickly be cooled. But there are examples of athletes collapsing and dying at major sporting events or collapsing and having heatstroke and having long-term consequences of that.”

Australian international netball player Amy Steel was forced to retire after suffering heatstroke during a pre-season game in a 39C (102F) arena in which the air conditioning wasn’t working. Five years on from the incident, she is unable to do intense exercise and blames climate change for the early end to her career.

British rower Melissa Wilson trained with the UK’s Olympic rowing team before injuries forced her out of contention for the Olympics. She said rowing in the heat “feels oppressive, like your energy is being sapped away just carrying the boat to the water. Your throat burns. The sweat runs into your eyes and makes it difficult to grip the handles of the blades with your hands. It’s harder to keep your thoughts clear and hold your technique to the highest standard. In rowing, you’re already pushing your body to its physical limits, so doing so in extreme heat is a really challenging addition to the picture.”

It could have been worse. Temperatures were as hot as forecast but there was no heatwave, as there were in the summers of 2018, 2019 and 2020 where temperatures got up to the high-30s and 40+, causing over a thousand excess deaths across Japan. Scientists found that the most extreme heatwave, in 2018, could not have happened without human-caused climate change.

Ben Bright, the New Zealand-born head coach for the British triathlon team, told Climate Home News: “The heat wave that we saw in Tokyo in 2018 would have meant the cancellation of most of the triathlon events in 2021, and it was just luck [the heatwaves of previous years] haven’t returned.”

The pandemic-enforced absence of spectators limited the damage too. Although they’re not exercising, spectators are usually older and less fit than Olympic athletes and those coming from abroad are often not used to Tokyo’s heat and humidity. Spectators are at risk of heatstroke and sunburn.

The Olympic authorities’ (sometimes reluctant) decisions have also limited the effects of heat. Against protests from Tokyo’s governor, the marathon and walking events were moved 800 km north to Sapporo, where the average August high temperature is 26C compared to Tokyo’s 31C. Competitors were due to set off at 11pm local time on Friday to avoid the worst of the heat, which was forecast to top 34C – far hotter than normal.

After Bandosa and Medvedev’s problems and world number one Novak Djokovic’s complaints, the tennis and Olympic authorties agreed to move the start of tennis matches from 11am to 3pm local time. Players were offered cool air blown through plastic tubes between matches. 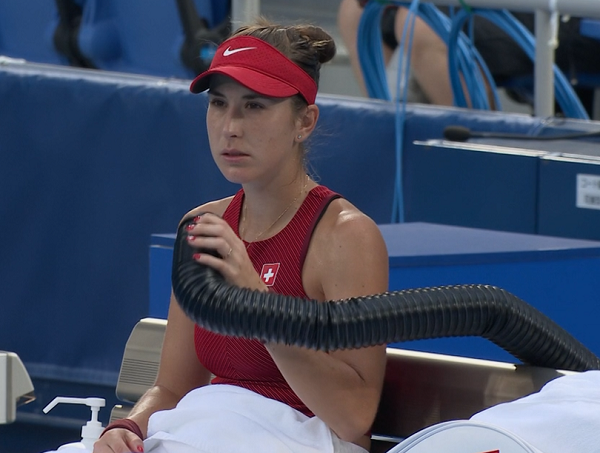 Athletes prepared for the heat, with many flying to hot, humid countries for training. According to Wilson: “GB Rowing had a camp in Varese [near Milan] which gets really hot. Some sessions your coach would bring an ice box with ice cubes for you to put into your kit.”

Other teams, like the UK’s triathlon team, trained in heat chambers. Wilson said the UK’s sailers and hockey players trained in heat tents while marathon swimmer Alice Dearing had to prepare to swim her 10km race in at least 29C water, so she was swimming in a tank heated to mid-30 degrees.

These measures can help but are expensive and beyond the budgets of many nations. A more comprehensive approach would be to shift the games to a cooler season.

Tipton says the Tokyo Olympics should have been held in the Autumn, as they were in Tokyo in 1964 and Mexico City in 1968. “It might well be that we start to think of it being the Autumn Olympics because of climate change,” he said.

But TV broadcasters are resistant, particularly in the US, where the autumn already has a packed sporting schedule. The NFL American Football season typically starts in September and the NBA basketball and NHL hockey seasons start in October.

Neal Pilson, former President of the US-based CBS Sports television channel told Reuters in 2018: “The Summer Olympics are simply of less value if held in October because of pre-existing programme commitments for sports…the IOC is well aware of American network preferences for the timing of the Summer and Winter games”.

A week of wildfires has left thousands homeless in southern Turkey

For the 2020/2021 Olympics, the IOC specified that the host nation must hold it some time between July 15 and August 31.

As well as athletes’ health and safety, Tipton says he wants sport fans to understand that climate change is affecting the sports they love and became advocates for climate action.

“Their experience and the spectacle they’re watching is being diminished by the fact that climate change is occurring and it’s impacting on the temperatures and the humidities that athletes have to deal with,” he said.

Bright argued that stopping climate change was the ultimate solution. “I think talking about what even organisers and athletes can do to mitigate against extreme conditions is the wrong way of looking at things. Of course it should be part of the conversation but we need to be tackling the cause, not putting a band aid over the injury,” he said.