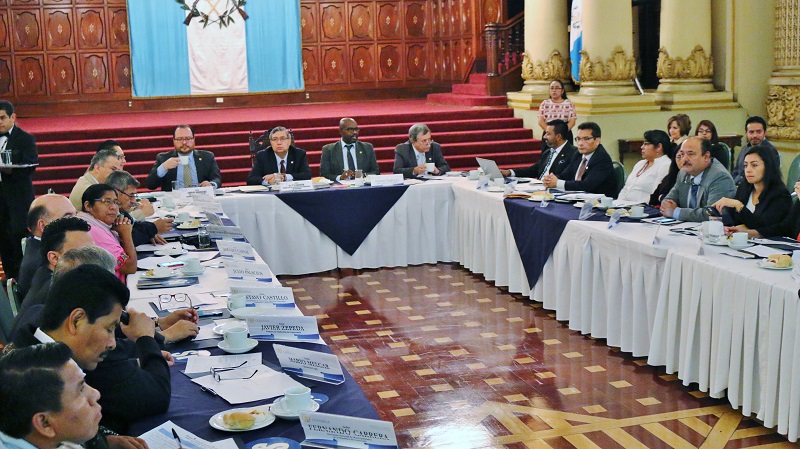 Thirteen years ago, the UK parliament passed a climate law, almost unanimously. It set up an independent climate change committee to advise successive governments on what emissions targets to set and how to meet them.

Gordon Brown, prime minister at the time, tasked the committee with examining whether the UK’s target to reduce emissions by 60% by 2050 “should be even stronger still”.

The answer came back: yes. The UK increased its ambition to 80%. A decade later, the committee said this should be upped to 100% and the UK became the first major economy to commit to net zero, a target that more than a hundred countries aspire to – even if they don’t yet have clear plans to get there.

This was the first and clearest example of how an independent group of experts, granted official status, can push governments to go further and faster on climate change.

Committees like this have sprung up across the world. Last month, representatives of 22 of these climate councils, from Chile to New Zealand, got together over on Zoom over two afternoons to swap notes.

They agreed that certain things were important to a useful committee: resources, multidisciplinary expertise (climate scientists plus other academics), a clear mandate, independence from government and a focus on a fair transition away from fossil fuels.

Speaking to members of six of these committees, the need for resources was an issue which came up repeatedly.

For example, the Swedish Climate Council has just four full-time staff on its secretariat and eight members, all of whom have other jobs.

The chair, Johan Kuylenstierna, told Climate Home News that because of this, unlike the UK, the council was unable to do much of its own analysis and relied on others’ work.

As well as analysis, members of some committees said they would like to engage more with the public but struggle to find the time.

Costa Rican physicist Ana María Durán-Quesada, a member of her country’s Scientific Climate Change Committee, said most of  the members of her committee have full-time academic jobs.

“We can’t always be available to go do presentations around the country on climate change. We have really tight schedules,” she said.

Canadian committee member Catherine Abreu said that, although the committee was “a bunch of fully employed busy people”, the secretariat has a budget for outreach and so she’s “sure we’ll make it work”.

The committees vary in their composition. Some are made up of supposedly neutral experts, like the UK’s, New Zealand’s, Costa Rica’s, Sweden’s and China’s. Others are intended to be representative of society, with different interest groups given a seat at the table.

South Africa’s also includes the representatives of industries which will be tasked with cleaning up, like state-owned energy monopoly Eskom, chemical company Sasol and business groups which represent coal mining firms.

Committee member Bobby Peek told Climate Home News the committee was too new to tell if this would lead to conflict, especially as meeting over Zoom has reduced the spontaneity of meetings.

The Climate Change Commission of Aotearoa (New Zealand) doesn’t aim to be a representative body. Its chair Rod Carr said “it was set up to be an independent evidence based body of experts”.

This has led to criticism for not having enough Maori representation and not having public health experts on the board.

“The very nature of having a board of seven not 50 or 120 is that there will be those who feel their voice is not at the table. That said, absolutely we do bear in mind that there are expertise that we need to seek out,” Carr said.

Australia’s Climate Change Authority has been accused of being too close to industry especially when, in April, the government appointed a former fossil fuel executive as chair of the authority.

In the UK, until recently the climate change committee included an executive from Drax, a power generator pivoting from coal to biomass. While that transition was supported by government subsidies, the green credentials of biomass are disputed – and Rebecca Heaton resigned after questions were raised about a potential conflict of interests.

Sweden’s Kuylenstierna said it was important that committees were independent, both from from government and from industry “even though we have a lot of stakeholder interaction and we listen in and we ask for input”.

As well as their resources and membership, committees vary in their powers. Some are a resource for governments to draw on privately when needed like China’s National Expert Panel on Climate Change, which is chaired by climate envoy Xie Zhenhua and nuclear physicist Du Xiangwa.

Others are tasked by law with setting carbon budgets or emissions reduction targets. In the UK, governments are not legally obliged to enact the committee’s advice on carbon budgets but have not deviated from it to date.

When policy action has not measured up to the ambition of these targets, the UK climate change committee has not been afraid to say so.

In January 2021, it wrote an open letter to the government condemning the approval of a new coking coal mine and in June its annual progress report said the government had done “surprisingly little” to deliver on its climate targets.

Canada’s committee will advise on five-yearly emissions reduction targets. Judging from the UK’s experience, Canada’s Catherine Abreu told Climate Home News she expected government to accept the advice – although it is not legally binding.

The common reference point for setting targets is the Paris Agreement, under which all governments agreed to hold global temperature rise “well below 2C” from pre-industrial levels and aim for 1.5C.

But there is a degree of flexibility in interpreting how responsibility for meeting the goal should be shared between rich and poor countries, producers and consumers, historic and emerging polluters. That is more of a political judgment than a scientific one.

New Zealand’s committee kept its advice accordingly vague last month, saying that the greenhouse gas emissions cutting target should be “much more than 36%” from 2005 to 2030 in line with a 1.5C warming limit.

A large chunk of New Zealand’s emissions are methane from sheep and cattle farming, unlike other developed countries where carbon dioxide from burning fossil fuels is the main issue. Methane has a more potent warming effect than carbon dioxide but does not hang around in the atmosphere as long.

Campaigners accused the committee of giving the country’s sizeable dairy sector an easy ride, saying the report had a “cow-shaped hole” in it.

Carr defended the analysis, saying the commission made conservative assumptions about what technology would be available to reduce emissions.

“At the end of the day, New Zealand’s fair share is determined by our historic emissions, our current level of emissions, by available technologies, by the particular context of New Zealand’s emissions where half of our emissions are actually from agricultural food production and that food is largely eaten by non New Zealanders around the world,” said Carr.

Despite the limitations and variations between committees, all the members Climate Home News spoke to said that they were a positive influence on their countries’ climate policies and should be adopted elsewhere.

The number of committees around the world has been growing rapidly. In May, South Korea’s President Moon Jae-in launched the Carbon Neutrality Committee which will have 50-100 members – some from government and others experts and representatives of particular parts of society, like trade unions, industry or young people.

In Taiwan, campaigners are pushing for a committee to be set up. But instead of pushing for an independent body, which requires changing a particularly controversial existing piece of legislation, they want a new climate law to set up an official taskforce for climate action with half of its members from academia or non-governmental organisations.

Although many of its member states have committees, as a bloc the EU does not. Kuylenstierna argued it should in order “to build credibility and transparency in terms of commitments being made and what you deliver in terms of policy and decisions”.