Comment: Justin Trudeau cannot claim to be a climate leader while championing a high-carbon industry; it’s time for a managed decline of oil production 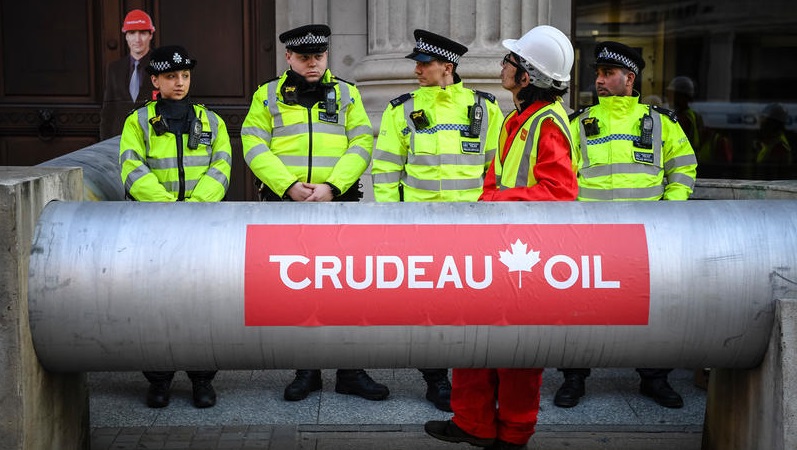 Protesters outside the Canadian embassy in the UK (Photo: Chris Ratcliffe/Greenpeace)

Canadian politicians, including prime minister Justin Trudeau, often imply that Canada’s environmental policies give our country social license to extract fossil fuels. But you can’t be a climate leader while championing a high-carbon industry.

With Canada expected to submit a new climate pledge – known as a nationally determined contribution (NDC) – to the UN within a month, the federal government has an opportunity to finally do the right thing and address the disconnect between its climate goals and its ongoing support for oil and gas.

Canada is the only G7 country whose emissions have gone up since the Paris agreement. Despite some significant steps forward – with the recent passage of climate accountability legislation in the House of Commons, nationwide carbon pricing, and accelerated phase-out of coal power – the cumulative result of these efforts remains unbalanced. Rising oil and gas emissions erode the hard-fought progress achieved in other sectors.

That’s why Canada’s enhanced NDC must lay out plans not only for ending fossil fuel subsidies, but also detail how the government will manage a decline of the oil and gas sector, with a just transition plan for workers and communities.

The International Energy Agency recently confirmed that to limit warming to 1.5C, we need to stop investing in fossil fuels and phase out oil and gas, starting right now. The Intergovernmental Panel on Climate Change (IPCC) estimated that global oil production needs to shrink by 37% below 2010 levels by 2030 and 87% by 2050.

Canada is heading in the opposite direction – projecting more oil and gas production in 2050 than in 2019. For a country with less than 0.5% of the world’s population, the expansion of Canada’s oil and gas sector is projected to exhaust up to 16% of the world’s carbon budget.

It’s not surprising oil and gas emissions continue to climb, given the massive financial support Canada’s most polluting sector receives. In 2020 alone, the federal government provided at least $1.91 billion in fossil fuel subsidies – an increase of over 200% from 2019 levels. Canada’s NDC needs to ensure government funding aligns with climate goals, rather than undercutting them.

It must also acknowledge that to meet climate goals, we need a managed phase-out of oil and gas production. Remaining silent does workers no favours. How can workers and their communities prepare for a shift to a net zero economy if the government doesn’t plan for the transition? When Trudeau pledged a significantly more ambitious emissions reduction target on Earth Day 2021, labour organizations like Unifor welcomed the announcement – on the condition that there be a just transition that leaves no workers behind.

Canadians are still waiting for the long-promised Just Transition Act. Workers and communities must be at the centre of plans to transition Canada’s economy to a climate-safe future. Canada’s NDC must ensure economic protection, particularly for racialized workers, women and indigenous peoples. It should explain how the government will expand the social safety net and create new opportunities across all sectors of the economy.

The oil and gas sector is Canada’s fastest growing source of emissions. If Canada is serious about cutting its emissions, the federal government can’t ignore it. An NDC that outlines a plan for ending fossil fuel subsidies and a managed transition of the oil and gas sector would be a good place to start. The NDC represents an opportunity for Canada to join the club of countries and actors who will fight hard to keep the 1.5C pledge. The world is watching.