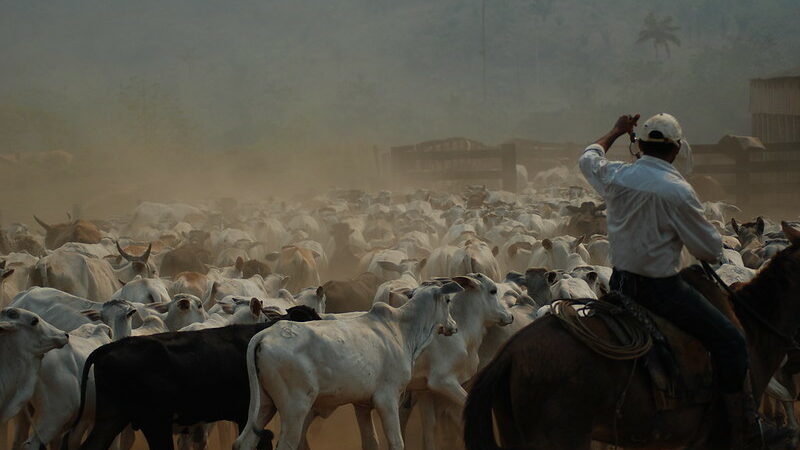 By Nicole Polsterer for Fern

The first major Amazon fire of 2020 was recently detected on deforested land in Mato Grosso, the Brazilian state where vast tracts of forest have been illegally cleared to make way for soy production – and which provides the European Union (EU) with a third of its soy imports from Brazil.

With the memories still fresh of last year’s catastrophic Amazon fires, the news seemed an omen for a nation in turmoil.

Eighteen months into his four-year term, president Jair Bolsonaro is mired in domestic political scandals, and his approval rating is plummeting.

Brazil’s economy is in freefall, with capital fleeing at levels not seen since the 1990s. The currency, the Real, is now the most devalued in the world.

The country is also the second worst-hit by Covid-19 on the planet, with no end to the spread of the virus in sight.

All this is creating a febrile political and social atmosphere, and the sound of protestors banging pots and pans can be heard ringing out nightly from balconies across the country.

But along with his reckless handling of the coronavirus crisis, Bolsonaro’s policies on the environment and human rights are also ringing international alarm bells.

This month European investors managing trillions of dollars of assets wrote an open letter warning that they could withdraw their investments in Brazil because increasing deforestation and the “dismantling” of policies to protect the environment and Indigenous Peoples are “creating widespread uncertainty”.

The catalogue of environmental and human damage since Bolsonaro took office on 1 January 2019 is mounting.

From August 2018 to July 2019, over 10,000 square kilometres of the Amazon rainforest was cut down, a rise of 34 per cent. This represents the worst year on year increase for a quarter of a century. Accompanying this is increasing incursions into Indigenous lands, along with violence against Indigenous Peoples.

Since Bolsonaro came to power, violent land conflicts have surged by almost a quarter, and a record number of Indigenous Peoples have been murdered.

More than half of the conflicts are concentrated in the Amazon region, according to the Pastoral Land Commission. These conflicts have affected more than 100,000 families and represent the biggest total since records began 34 years ago.

“This is a government that wants to hand over our territories to large-scale agriculture. Not only do they have a policy of not granting us rights to our land, it is worse – they are trying to take away land we already have the rights to,” says Sônia Guajajara, the Coordinator of Articulation of the Indigenous Peoples of Brazil (APIB) which represents 300 Brazilian Indigenous Peoples groups, in a Fern briefing published this week.

“Whereas before there were violent land conflicts, now it is incited by the hate speech coming from the federal government. Every day they incite violence. People think they have the right to kill with impunity,” says Guajajara.

The latest salvo against Indigenous rights is the bill proposed this month by the governor of Mato Grosso, Mauro Mendes.

At a stroke, it removes vast swathes of Indigenous territories from the official register, the Cadastro Ambiental Rural – violating the principle of Free, Prior and Informed Consent (FPIC),  and threatening to aggravate the land conflicts and rampant deforestation that are already causing havoc in the state.

For the European Union, Brazil’s second largest trading partner, and a huge importer of the soy and beef that drive deforestation, social conflict and land grabs in Mato Grosso and elsewhere in Brazil, all this poses serious questions about its commitment to protecting human rights and the environment.

Last June, after 20 years of negotiations, the EU finalised a Free Trade Agreement (FTA) with the Mercosur bloc of nations, of which Brazil is the largest member. If unopposed, this deal will allow the import of 99,000 tonnes of beef tariff-free – sacrificing forests and rights on the altar of trade.

This week Germany takes over the rotating EU Council Presidency, and one of its priorities is getting the Mercosur deal signed by the Council of the EU. Now, therefore is the time for those calling for the EU to discard the agreement to raise their voices.

Momentum to stop the deal is gathering pace.

The Austrian, Wallonian and Dutch parliaments have all rejected the Mercosur deal in its current form, and the highest political representatives of France and Ireland have expressly criticised it.

The time is now well overdue for the EU to follow suit and end its role in Brazil’s environmental and social crimes.

Paulo Barreto, a Senior Researcher at Imazon an independent non-profit organisation based in Belém, Brazil, and one of Fern’s partners, warns: “Brazil is already becoming a pariah state. Going forward will be chaotic and tense.”

The EU should be mitigating this, rather than fuelling it.

Bolsonaro’s Brazil: A Pariah State? a new briefing by the forests and rights NGO Fern is published this week.