Comment: As a non-white activist, I was excluded from Greenpeace publicity. This was not an isolated incident and the movement needs to change 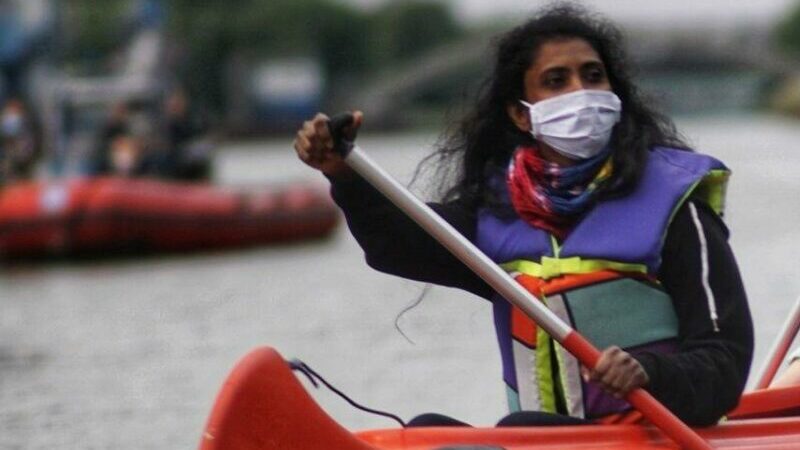 I was the only non-white activist at a protest against a coal plant in Germany. I was left out of pictures shared on social media by Greenpeace Germany.

This happened less than six months after a similar incident with Ugandan climate activist Vanessa Nakate. The only difference: this time it was done by people inside the climate movement. People I’d normally call colleagues and friends.

When I became active in the climate movement, I didn’t think I would end up talking about the importance of addressing racism over and over again.

In my naïve world, I thought when people fight against one form of injustice, they naturally develop sensitivity and are quick to respond to other injustices as well. I’ve learned that the world is much more complicated than this.

Following the Black Lives Matter protests triggered by the murder of George Floyd, it took Fridays for Future Germany more than a week to show solidarity on social media. Moreover, Fridays for Future ‘liked’ a comment on Instagram, which criticized the Darmstadt local for speaking out against police violence and structural racism.

These incidents were embarrassing for me. As a climate activist I feel a deep ownership over the movement. And as a woman of color, I have a deep connection with the anti-racism movement. How can I defend my colleagues in the climate movement to fellow anti-racism activists, when they show such little empathy towards racial struggles?

But before defending my colleagues to the outside world, I need to talk about the representation of people of colour inside the climate movement.

On 20 May, I, and seven other women activists from different organizations – including Greenpeace Germany – participated in a protest against the new coal power plant Datteln 4.

Following the action, Greenpeace Germany tweeted photos. There were plenty of pictures to choose from where I was visible. Yet, not one in the eight photos that were tweeted from Greenpeace’s account. I was only tagged in the post.

This happened less than six months after a similar incident with Ugandan climate activist Vanessa Nakate. The only difference: this time it was done by people inside the climate movement.

My first instinct was – as most of us would do when someone treats you in a disrespectful way – to walk away. I untagged myself from the post. But then I started feeling guilty for not pointing out their selectiveness. For not being stronger.

I am used to facing racism in the streets of Germany from people who dress up in black and shave their heads. Also sometimes from regular looking strangers who don’t realise that they are being racist. I was not expecting this from people I’d consider colleagues.

Over time, I realized, it’s not that the climate movement doesn’t know its problems or is completely uneducated. It is rather, inside the movement there is a status quo, and I am expected to fit in. I am tolerated in climate spaces as long as I don’t claim the same ownership as the white activists. Black, indigenous and people of colour (BIPoC) are welcome when we fit the role of a ‘token’ or a ‘victim voice’.

That’s also why I hesitate to share this experience. It’s not fun to share injustices happening to you. Yet, it is a burden that we, the ‘not-white’ activists, bear. Our proud and strong moments get overrun by insanely unpleasant things that others do to us.

She is still referred in some newspapers as the “girl who was cropped out of a picture with Greta Thunberg”. How many of you refer to the Associated Press as the ‘racist’ news agency that cropped out a girl based on her looks?

I am Tonny Nowshin. I am an economist, a researcher, a climate justice and degrowth activist. I have been mobilising to save the world’s largest mangrove forest, the Sundarbans, since 2016. I am a wonderful friend, a proud daughter, a kind mentor and an unyielding comrade. This is how I want you to know me.

The reason I share my unpleasant experience publicly is that what happened with Vanessa Nakate, me and many others are not isolated incidents. They happen often in our supposedly progressive movement. Why? Because it is still dominated by people who are blind to their white privilege. For some of them, the planet needs to be saved because the exploitation of it has reached a point where it disrupts their entitled bubbles. The forest fires and cyclones are now happening too close to home.

For the rest, that includes both BIPoC and white activists, we are in this fight to protect our planet and create a better future for all. We see that the only way we can get there is by acknowledging that racism and the climate crisis have the same root and our fights are interconnected. A climate movement that is racist can never deliver a just future.

I have found many inspiring and determined people in this fight. We know the movement will look much different in a year from today because we are not leaving the room and we are not going to be silent about the racist structures in our movement anymore.

Versions of this article were previously published in German in Taz and Klima Reporter. Greenpeace Germany responded to the accusation of racism, apologising for the white-only photo selection, noting that photos of Tonny Nowshin at the demonstration were available in the Greenpeace photo library and promising to learn from the incident.