What does Greta Thunberg’s call for equity mean?

Comment: The Swedish activist has mentioned it in all her major speeches. Here’s how we can calculate the fair share of the burden of climate action 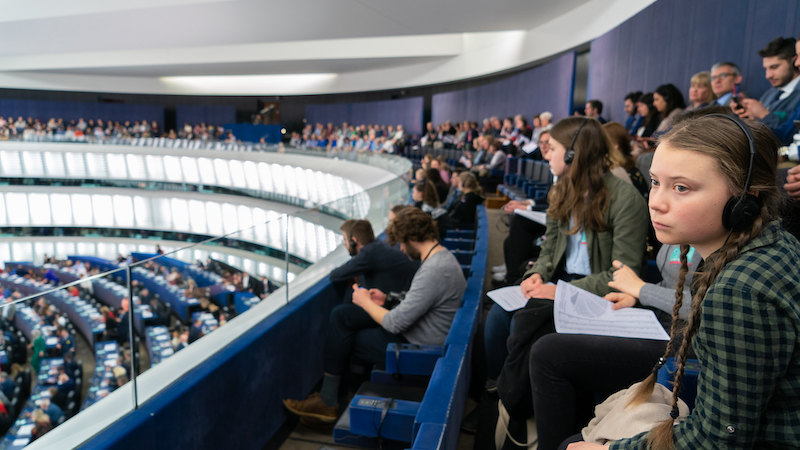 Greta Thunberg has some memorable quotes that now adorn thousands of protest placards and Instagram posts.

However, one word which she has mentioned consistently in her speeches — from the speech at Cop24 in Katowice that made her a household name to the European Parliament to her latest speech at the UN climate action summit — has been given little to no attention, despite being the key to climate action.

To put it as simply as possible, equity is about fairness.

You’ve probably noticed that in discourse about climate change, and in particular climate action, there’s a lot of use of the word “we.”

But there’s a problem with this which my friend Daniel Voskoboynik describes in his excellent book as “the hollowness of we”. This hollowness is everywhere around us. You see it in all the talk about saving ‘the future’, while in the present, people are already dying in a 1C world. When the IPCC land report came out a few months ago there was a Wired.com headline: “We’re eating this planet to death”. But 1 billion go to bed hungry each night. 3.8 billion people survive on less than $5 a day, and 26 individuals own as much as the poorest half of humanity. 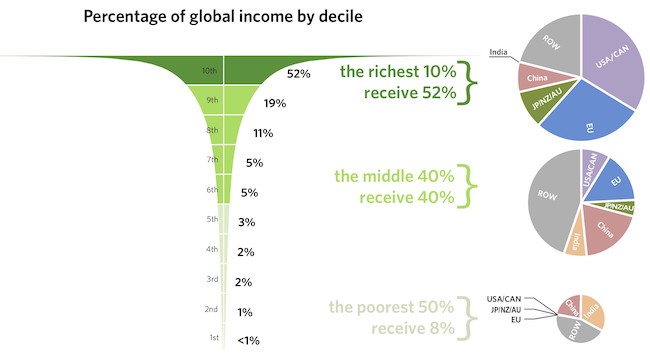 (From the CSO Equity Review 2018 Report)

Even though there is massive inequality within the industrialised countries of the global north, it is also true that the overwhelming majority of the richest 10% are here, and the poorest 50% are almost entirely in the global majority countries of the south. The 40% of the “global middle class” are in fact very poor — half of them earn less than $20/day and many earn less than $3/day. They are almost all in the global south. 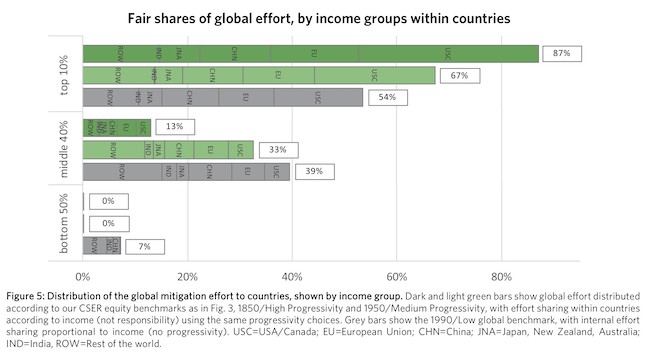 Broadly speaking, the industrial countries, with a combined 20% of global population, are responsible for around 80% of all emissions, ever. They have grown immensely wealthy and powerful as a result of the systematic plunder of the Global South — from slavery to colonialism to present-day imperialism.

This immense “historical responsibility” is the basis for what climate justice movements have come to call “climate debt”. The Northern countries owe reparations for denied development opportunities, and for impacts as a result of the warming they’ve caused and from which they’ve benefited.

Now, as Greta often reminds us, the IPCC shows us there is not much ‘carbon budget’ left in the atmosphere until we breach 1.5C. The size of the remaining carbon budget depends on what probabilities we are willing to accept. The IPCC says that to have a “reasonable” 66% chance of staying below 1.5C we need to cut global emissions 50% within 12 years (and even this assumes vast amounts of unproven and potentially dangerous “negative emissions technologies”). We need to get as close to zero as possible, as soon as possible, while socially just, people-led natural solutions draw down carbon from the atmosphere into soil and forests.

Our question of course is how to do this? Climate justice movements have long talked about what a fair response to the crisis looks like, and have maintained that responsibility should be allocated in a fair way between rich and poor countries, and between rich and poor people within countries. Wealthy countries and elites that have caused the climate problem must do the most to fix it and those who have done the least to cause it but are most affected must be given support to cope.

‘We will not forgive you’: Greta Thunberg’s speech to leaders at UN – video

The United Nations Framework Convention on Climate Change (UNFCCC) also makes clear that all countries must contribute to climate action in accordance with their (common but differentiated) historical responsibility and current capacity. These are what we refer to as equity principles. But this has never gone down well with the US, which has sought to shirk its responsibility since the Convention entered into force in 1994.

George Bush Sr best expressed this attitude when he said “the American way of life is not up for negotiation”. It’s just a shame that this way of life is killing the rest of us.

To cut the long and horrible story of climate negotiations very short, the US eventually succeeded in instigating a “great escape” of all developed countries from the targets and timetables approach of the 1997 Kyoto Protocol (which it negotiated but never ratified). It managed to do this through a range of underhanded means: from espionage to cutting aid to propaganda to divide-and-rule.

The result was the 2015 Paris Agreement. Obama’s special climate envoy Todd Stern was very clear about the agreement when negotiations began — he said “if equity is in, we’re out”. It lacks a clear system to determine what is fair and equitable between rich and poor countries — instead leaving each to be their own judge and jury. The result in terms of climate is that we’re on track for 3–4C warming. For this, the US inserted a clause that means it refuses to accept liability for damages resulting from its historic pollution. 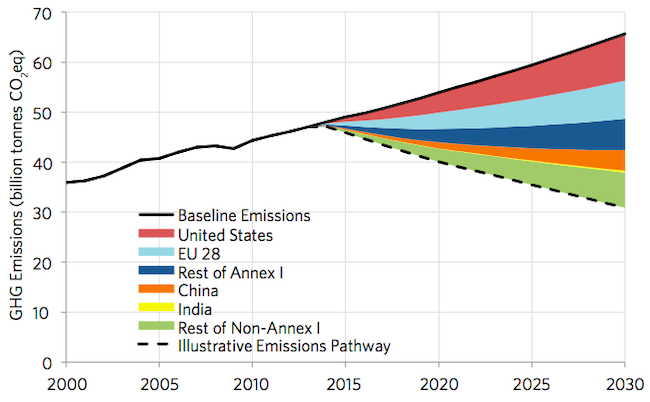 The mitigation required by 2030 for a reasonable chance of staying on the 1.5C pathway is ~35Gt. The mitigation so far pledged for 2030 is ~3Gt. There’s a huge “gap” — but it is as big as it is because of historic pollution and decades of inaction from the polluters. But the way it is framed pushes responsibility from rich to poor.

It is possible to determine what a fair allocation of effort to bridge this gap would be. A broad coalition have developed a “fair shares” methodology based on equity principles. There is a helpful online calculator developed by the Climate Equity Reference Project which allows the user to adjust the settings for different assumptions such as which start date from which to begin measuring historical responsibility. It determines each country’s capacity to reduce the emissions it will put into the atmosphere from now on, by considering incomes across the population. So, incomes of people who can only cover basic needs are not counted (a large part of the populations in poor countries). Incomes above USD 7,500 per person/year are counted towards a country’s capacity, and high incomes, e.g. above USD 50,000, can be counted at a proportionally higher rate — similar to our tax systems.

When you run the numbers it quickly becomes apparent that a fair allocation of emissions reductions globally requires industrialised countries to reduce domestic emissions to as near as possible to real zero as quickly as possible, and to simultaneously make it possible for poor countries to avoid emissions while they develop (e.g. build renewable energy systems, hospitals, schools, environmentally friendly industries etc.).

The UK, with 3rd highest emitting per-capita lifestyle and where many of the worlds mining giants are domiciled, has pledged to “net”-zero by 2050 — not a fair share. Zero is not enough, and “net” is not real zero. An actual fair share would be negative 202% i.e. 202% below 1990 levels, by 2030. It can’t do that all domestically, it would have to enable the excess reductions in other countries. 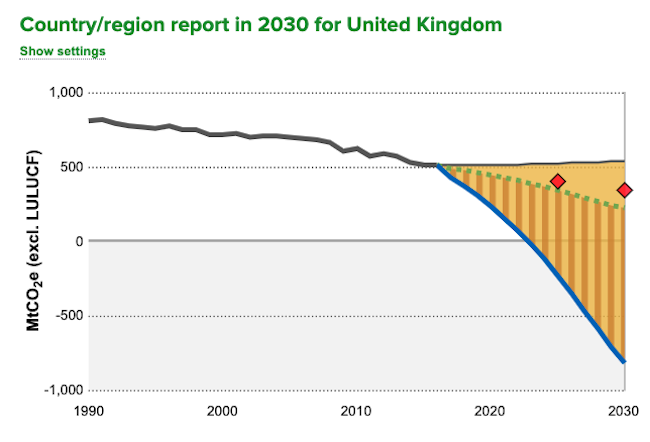 We can and should debate terms like development but what we say when we use them in the context of equity is more intuitive — we’re talking about the right to a dignified life. A right to food, water, land, energy, decent work in decent conditions. These are basic rights. If we’re not insistent on an equitable approach we are essentially telling millions of people that their lives don’t matter as much as our lifestyles.

Greta puts it even more clearly when she said condemned a system in which “the suffering of the many pays for the luxury of the few.”

This article was originally published on Nathan Thanki’s blog The World at 1C.