Comment: When regional giants Australia and NZ joined small islands at a recent leaders’ forum they produced the Pacific’s strongest-ever call to act on climate change 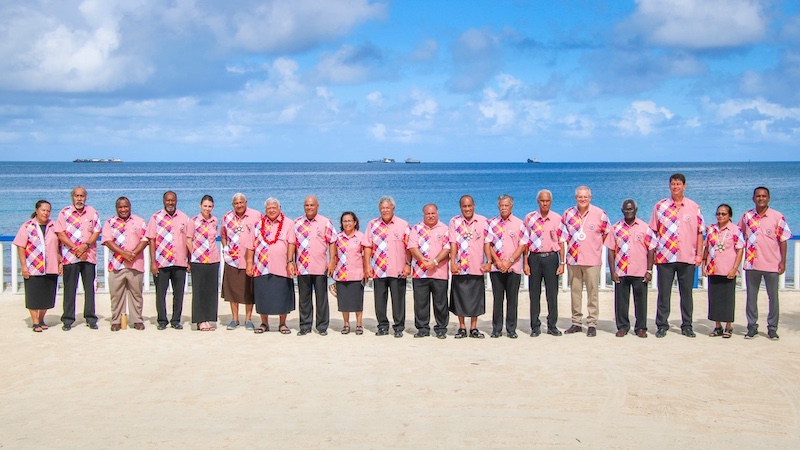 It was indeed an emotional moment when Pacific leaders and delegates were greeted by small children of Tuvalu – submerged in water surrounding a model of their sinking islands with their call to “Save Tuvalu, save the world”, upon their arrival to the 50th Pacific Islands Forum held in Funafuti, Tuvalu, from 13 to 16 August.

Tuvalu’s message could not be clearer or more important – climate change is real and the future of their children and all the children of our blue Pacific is uncertain – unless urgent, ambitious action is taken to limit global warming to below 1.5C.

Last year, Pacific Islands Forum leaders reaffirmed, through the Boe Declaration on Regional Security, that climate change is the single greatest threat facing the region. At their 50th meeting in Tuvalu, leaders discussed this threat and resolved, by consensus, to take urgent action.

Australia seeks to water down climate declaration at Pacific summit

Over the past week, I have seen significant interest in the Kainaki II Declaration from people all around our region and internationally. The level of interest, debate and discussion is very positive and speaks to the nature of the climate change crisis that we now face, and the catastrophic consequences of inaction for many of the forum’s members.

As secretary general, I want to use this opportunity to make one very important point about the declaration.

The Kainaki II Declaration for Urgent Climate Change Action Now is the strongest statement the Pacific Islands Forum has ever issued collectively on climate change, and will stand as a key advocacy instrument to support the Pacific’s collective voice at the UN secretary-general’s climate action summit to be held in New York next month, the 25th Conference of the Parties (Cop25) to the United Nations Framework Convention on Climate Change (UNFCCC) in Chile in December and other global meetings.

The Kainaki II Declaration is a significant milestone. Especially so, when you consider that Australia and New Zealand are developed country parties within the context of international climate change negotiations and are part of a negotiating group which consists of larger countries such as the US, Japan and Canada. The fact that Australia and New Zealand, as members of the Pacific Islands Forum, support and endorse the Kainaki II Declaration will elevate and add considerable weight to the Pacific’s negotiating priorities at the international level, including at the upcoming Cop25.

The Kainaki II Declaration is the first time the Pacific Islands Forum has agreed and declared that there is a ‘climate change crisis’ facing the Pacific island nations. It appears twice in the declaration in paragraphs 1 and 9. By agreeing to use the term ‘climate change crisis’, Pacific leaders have set a new bar for the international community, as “crisis” is currently not agreed language in the Paris Agreement or in the UNFCCC process.

We all know that limiting the global average temperature rise to below 1.5C above pre-industrial levels is a red line for Pacific island nations. In response, the Kainaki II Declaration references the Intergovernmental Panel on Climate Change (IPCC) 2018 Special Report on 1.5C at least three times and also declares the need to limit global average temperature increase to 1.5C five times. This is a strong signal from Pacific leaders to ensure the international community meets all obligations under the Paris Agreement and increases the pressure for all countries to take urgent action to reduce global greenhouse gas emissions and prevent catastrophic global warming.

To ensure we are on track for the 1.5C pathway greenhouse gas emissions must peak by 2020 and decline thereafter reaching net zero by 2050. Reflecting this, the Kainaki II Declaration mentions ‘achieving net zero carbon by 2050’ twice, alongside the need to formulate long-term low emissions strategies by 2020.

On nationally determined contributions (NDCs), the language in the Kainaki II Declaration recognises the need for all parties to the Paris Agreement to update and communicate their revised NDCs in 2020, including meeting or exceeding their current commitments to pursue efforts to limit the global average temperature increase to 1.5C, whilst recognising the opportunity presented during the first global stocktake, to take place in 2023.

Several leaders in our region have consistently called on industralised nations and large emitters to phase out fossil fuel subsidies and ban the construction of new coal plants. The Kainaki II Declaration references the term ‘just transition from fossil fuels’, which refers to a transition away from coal, oil and gas and calls on members of G7 and G20 to ‘rapidly implement’ their existing commitment to phase out inefficient fossil fuel subsidies is a positive step.

It is widely acknowledged that simplified access to scaled-up international climate finance is a key priority to forum island countries. In this regard, the Kainaki II Declaration not only seeks support for replenishment of the Green Climate Fund, but also calls on the international community to meet their climate finance commitments to jointly mobilise $100 billion per year by 2020 and to conclude work on the Adaptation Fund serving the Paris Agreement. I note today’s news that the United Kingdom will double its contribution to the Green Climate Fund as a positive response to the Kainaki II Declaration. We hope other development partners will follow this lead.

The last issue I want to note is the importance of the climate-ocean nexus to our blue pacific continent. In welcoming the Cop25 presidency’s focus on oceans, the Kainaki II Declaration calls on all parties attending Cop25 to consider a work programme on oceans within the UNFCCC process. This is a significant step, noting the work on the climate-ocean nexus has been running parallel, rather than as an integrated component within international climate change negotiations.

In closing, while the Kainaki II Declaration is a milestone for the Pacific Islands Forum, we realise that more still needs to be done if we are to increase the ambition levels of industrialised nations and large emitters globally. For many of the countries of the forum, climate change is not a political issue but an existential one and we do not have the time to delay commitments for transformative change. Urgent political will and ambition, both internationally and domestically, is immediately required to respond to the climate change crisis facing our region.

I have personally witnessed the robustness and richness of the discussions by our leaders on climate change issues evolve and grow from year-to-year. The strength of the consensus formed around Kainaki II speaks to the strength of our collective and to our solidarity as a family.

The Kainaki II Declaration is statement of urgent action that all Pacific people should be proud of, and I am certain it will further enhance the Pacific Islands Forum’s strong record for global leadership on climate issues.

Meg Taylor is the secretary-general of the Pacific Islands Forum.