After an MP grabbed a climate protester, young Brits will never vote for these Tories 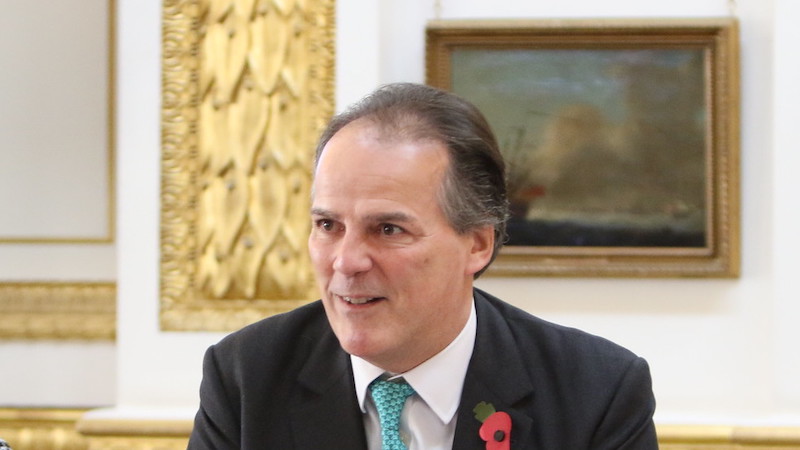 UK foreign minister Mark Field was suspended after grabbing a climate protester by the neck at a dinner (Photo: FCO )

One night last week I was sat with some green and mint tea, a TedTalk on my laptop and a cat on my lap when my phone started violently buzzing. It was Twitter and it was horrific.

I opened my phone to see photos of a prominent adult mentor, safeguarding member and all round inspiration of the youth strikes in a stark red dress being dragged, fairly aggressively, out of a dinner hall filled with Britain’s elite. Hannah Martin was a peaceful protester, campaigning for Greenpeace, who interrupted Phillip Hammond’s speech and stood her ground.

Hannah was one of a group of protesters at the Mansion House speech who stood against our government, bypassed security and fought against the climate crisis. The way she was manhandled was disgraceful but nothing compared to what was happening on the other side of the dining hall. Video soon emerged of a peaceful female protester being grabbed by the neck and slammed against a pillar by Tory MP Mark Field who seemed to be wholly unprovoked.

In this longer version of the video, you can see the woman apparently posing no immediate threat as she passes behind Mark Field. He marches her out of the room by her neck. I wasn’t there, so I can’t say she didn’t pose a risk, but it looks heavy handed. pic.twitter.com/zX2BtcPW4t

I couldn’t contain my disbelief, disgust and down right despair at what I was seeing. I was so unbelievably proud of Hannah and every other incredible climate activist there for fighting for what they believed in, but that feeling of empowerment and pride was quickly replaced with anger. Anger at the fact a Conservative sitting member of parliament believed he was in the right for aggressively approaching a young unarmed woman. Anger at the fact the dining hall who witnessed this incident stayed silent. Anger at the fact the Conservative politicians believe themselves to be above the law.

The condemnation of the youth strikes by Tory MP’s is almost laughable at this point. We are told we will be fined for truancy, that we are breaking the law by taking to the streets. (We do it as an act of civil disobedience, but that is a separate issue.) We are consistently demeaned, berated and insulted by members of the Conservative party and their weak climate policy but after Mark Field’s violence it is now beyond hypocrisy.

Forgive us if we do not agree with an environmental secretary whose party tells us our strikes are illegal but his consumption of Class A drugs is simply an old mistake. Or if we, as the young people, refuse to support a party that openly defends an MP’s indefensible attack on a young peaceful female protester. Don’t be shocked if we refuse to engage with a party that gives implied consent and disregard to violence when we as school children have created one of the largest non-violent movements the world has ever seen.

‘This is bigger’: Palestinian and Israeli teens strike together for the climate

One of our demands as the UK Student Climate Network is to ’empower the future’. We want the incorporation of youth views into British and global politics and we want the voting age lowered to 16 so we can enfranchise young people.

How do the Tories expect to win the vote of young people when they behave like this? We’re already annoyed by the government’s persistent policy green-washing and pitiful pledge to reach net-zero carbon emissions by 2050, now you add dishonesty and violence. Climate change is the defining issue for our generation, just as it should’ve been for the generation before us. Politicians need to reflect that in actual policy and the implementation of a Green New Deal. They need to be at the forefront of creating safe and open spaces for climate activists to voice their fears and issues – and importantly, they need to sack Mark Field.

Cate Davies is a 17-year-old student from Liverpool and a member of the UK Student Climate Network.