‘This is bigger’: Palestinian and Israeli teens strike together for the climate

Comment: At a climate march in Jerusalem, students put hatred aside to tell the government that nothing matters more than a safe climate 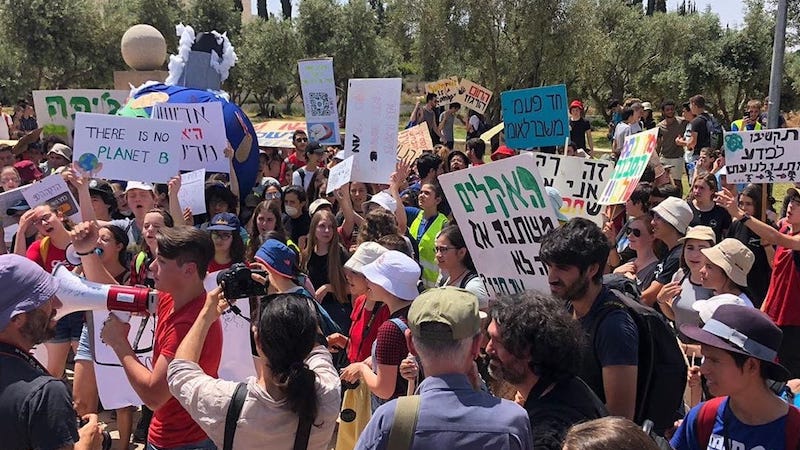 Youth strikers in Jerusalem on Tuesday, the author is carrying the megaphone (Photo: Michael Bäcklund)

The Israeli school strike branch had a very successful strike on Tuesday, which was three times bigger than the last one in March.

It was the first sitting day of the new parliament. We had over 500 students marching and shouting slogans in front of the prestigious Knesset in Jerusalem.

We had Arab Palestinians and Jewish Israelis participating together. We have multiplied our following on social media and we have started to plan social media campaign with celebrities. We have also been asked to do a bunch of television and newspaper interviews.

We formed our movement in December and it has been now going on for almost half a year. But despite our growth we have struggled to convince the Israeli people, who are focused on our domestic political problems.

In our national group, the Israelis and Palestinians are not allowed to mention the political situation. We feel that in order to defeat something much bigger than us, we must put the unfortunate hatred aside and focus on what actually matters the most: saving the world from an ongoing climate breakdown.

This article is part of a collaboration between Climate Home News and the global student climate strike movement. Read why we are offering a platform to young people here.

In Israel, society prioritizes political conflicts over action against climate change. Because of this, our school system teaches us practically nothing about the threat the climate poses. An overwhelming majority of teens don’t even know that by their thirties they are going to face a point of no return.

So even though we had three times more people gathered this week, even though we have countries announcing climate emergencies for the first time in history and even though one Knesset member Miki Haimovitz supported us in her first speech to parliament, we cannot rest nor celebrate.

We have 300,000 more teens to reach in Israel, and more than 190 countries that need to declare the emergency as well. We’ve got 119 more Knesset members to convince, 119 members to show that our future is precious, 119 to show that we matter. Because apparently in the prestigious building they do not think that we matter enough.

Our message that we have been trying to channel now for months is if the government truly prioritises security over social services, education and anti-poverty policies, it simply cannot turn its back to climate breakdown.

Climate change is an urgent crisis not just from a biological, ecological and environmental perspective. It will also cause humanitarian and especially economic distress.

In Israel, we face extreme weather conditions, mainly drought. Agriculture will suffer. The lack of water will increase when the temperature rises and heat waves arrive.

Low income families will struggle with prices, spending will decrease, real estate business will become harder, hyper-inflation will arrive, not only in our country, but across the Middle East.

If I could ask one question to the prime minister of Israel it would be: How many protests and strikes do we, the children, need to arrange until a crisis science has warned about becomes important enough to act against?

One of the so-called arguments I tend to hear a lot in the news is that climate change is too pricey to act against. To answer them I would have to quote scientist Bill Nye: “The earth is on FUCKING FIRE… There is a lot we can do to put it out, are any of them free? No of course not! Nothing’s free you idiots, grow the fuck up.”

As Greta Thunberg said our house is on fire. If your house was on fire and your family inside that house, would you sit quietly and worry about the price of the bucket of water? Obviously you wouldn’t be that foolish.

The evidence of climate change is all around us and scientists’ warnings are increasingly scary. I personally feel that unfortunately, we are in a ideological war against people that don’t trust scientific facts. But I also know that the single most precious weapon that we have in our little teenage hands is the truth. In the UN’s IPCC reports, the scientific consensus and thousands of pages of scientific journals, we have the truth.

Thus, on behalf of strike4future Israel, I would like to urge the readers of this article to use that truth in order to spread the word, help us to win this war and save ourselves. Help us to put the fire out. Help us to reach the 119 remaining parliament members in Israel. Help us to advocate and strike until Israel will become 100% renewable.

Michael Bäcklund is 16 years old and the global outreach director of strike4future-Israel. If you wish to help the Israeli strikers, you can contact them on @strike4future_israel. You can also email [email protected]