‘We amplified our voices’: women lead the charge on local climate effects

Sponsored content: From traditional farming techniques to self-care, women and girls are finding their own ways to adapt to climate change 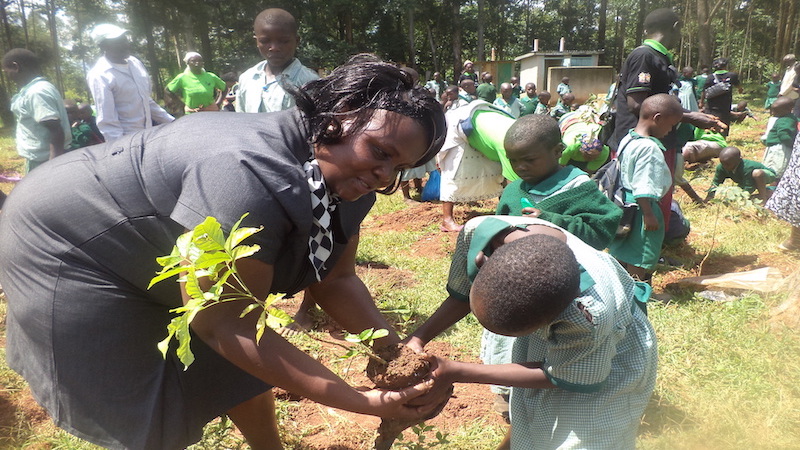 In rural western Kenya, it’s the women farmers who feel the biggest loss from unusual crop seasons, increased flooding and previously unseen plant diseases – while the men set off in search of urban jobs.

In response, these grassroots women are leading efforts to adapt to the disruptions linked to climate change, and make their farming communities more resilient. And many of those answers come from the examples set by their mothers and grandmothers, rather than modern agriculture.

“It’s the role of women to bring food on the table. When the season is affected and women are not able to get very good yields, they don’t have food,” said Violet Shivutse of the Shibuye Community Health Workers organisation in western Kenya, which is part of the international Huairou Commission representing grassroots women.

“What women have been doing is to ensure that, whether it’s a very heavy rainfall or a long drought period, they can at least have innovations that will make them able to continue planting and growing food for their families,” Shivutse added.

Broadly, climate change hits under-developed and vulnerable communities first and hardest. But the effects on daily lives, work and families vary widely according to location, traditional gender roles, culture and other factors.

In Bangladesh, for example, families are marrying their daughters younger to ensure financial stability. In South Sudan, deforestation is forcing women and girls to travel farther for firewood, leaving them less time to prepare meals and making them more vulnerable to abuse from husbands, according to a report last year by the Global Greengrants Fund and Prospera International Network of Women’s Funds.

Now there’s a small but growing movement to help women and girls share their own solutions for climate resilience.

“There was never any kind of engagement on what women and girls were experiencing in their communities, but they might create solutions that would be meaningful and culturally appropriate for them,” said Diane Ives of the Kendeda Fund in the US. The Kendeda Fund supports programmes to help women and girls respond to climate change, including the Global Greengrants Fund and Climate Justice Resilience Fund (CJRF).

“We’re starting the conversation with lifting up the voices of women and girls, rather than coming in with solutions – like, ‘We’ve got this pump that we can use in your fields’, when perhaps in that community women aren’t supposed to be fixing pumps but doing something else,” Ives added.

Often, the projects are aimed at spreading knowledge and education.

The international Frida Fund, also backed by Kendeda, supports an online magazine called the Young Feminists for Climate Justice Storytelling. Its second edition looks at how women who organise climate action in their communities can respond to the harassment, violence and other backlash they might face. The answer: greater self-care.

In Kenya, the Shibuye Community Health Workers organises groups of 25 to 30 women to share practices many of them have been using for generations, Shivutse said. Rather than using the “western ways” of planting hybrid seeds and using pesticides, they’re learning to make fertiliser out of compost manure and irrigate the land, and storing older and more durable seeds.

With a grant from CJRF last year, the Shibuye organisation has expanded to restore the nearby Kakamega rainforest after years of encroachment and rehabilitate the soil near Lake Victoria. The women of the community are managing the grant and leading the project.

This is raising awareness in the region and among government officials, agriculture industry stakeholders and others, Shivutse said.

“These practices were being done with individual women in small silos,” she said. “But when we came together as strong groups of grassroots women who brought different skills and practices together, and strengthened what each group was doing, we amplified our voices.”