Sponsored content: A novel project aims to show girls can be part of the solution to extreme weather impacts, not burdens for their families to marry off 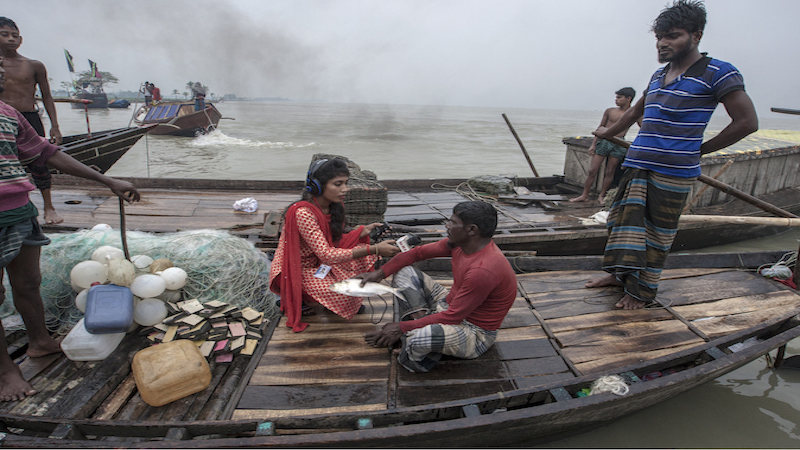 Community radio clubs in Bangladesh aim to help locals adapt to the damaging effects of climate change by dissuading families from marrying their daughters off before they turn 18 years old.

The two issues – adapting to climate change and child marriage – may seem unrelated, to each other and to community radio. But this is one of a number of projects around the world making the case that unexpected activities may prove most effective in addressing the worst knock-on effects of changing weather patterns.

In the Bay of Bengal, the number of girls marrying at as young as 12 years old is increasing as cyclones, floods and other destructive weather events become more frequent, exacerbating poverty, according to the Coastal Association for Social Transformation Trust (Coast), which created the radio clubs.

The aim of the clubs is to raise awareness, both about young girls’ rights, reproductive health, domestic violence and other issues around child marriage, and about ways to adapt to and prepare for climate change effects in the region. Coast now has around 40 radio clubs, and has expanded to involve housewives, fishermen and farmers. It has around 500,000 listeners.

“The problem is created because of climate change,” said Ferdous Ara Rumee, assistant director at Coast. “Parents feel very [economically] insecure … and they don’t have the knowledge of reproductive health rights and facilities… we are trying to give them some knowledge through the talk shows, magazines, new bulletins.”

Coast started the project in 2015 and received a grant from the Climate Justice Resilience Fund (CJRF) in late 2017 for three additional years of work. The US-based CJRF seeks to help women, youth and indigenous peoples cope with climate change and its effects by supporting local communities in building resilience. It uses a “social justice lens” to find innovative solutions, said Heather McGray, the fund’s director.

For the CJRF, the Coast project addresses the mix of cultural, climactic and economic factors that shape the specific consequences of climate change in coastal Bangladesh. As floods and soil salinisation are pushing families to move to cities, there is the “false sense” that a girl will be safer, and a family’s obligations fulfilled, once she is married, said McGray. But child marriage violates human rights long recognised by Bangladesh and internationally, and has been found to undermine the development of girls and their communities.

“Climate change is an existential threat with the unique power to undermine all of the progress society is making,” said Dena Kimball, executive director of the Kendada Fund, an investor in CJRF. “When we empower young women to play a part in building comprehensive climate solutions, they discover the agency and power to shape their own future and to improve the future for society as a whole.”

While vulnerable groups such as indigenous peoples and women tend to be most affected by changes, they also offer “unique capabilities and insights” – for example in managing natural resources, McGray added.

This is the idea behind another CJRF-backed climate project that may seem counter-intuitive at first glance.

With a grant of $350,000 over two years, Kenya’s Indigenous Movement for Peace Advancement and Conflict Transformation (Impact) is creating a coalition to help pastoralist communities in the country take advantage of a new law that for the first time formally recognises community tenure. By registering their lands, communities gain the power to manage their pasture and herds sustainably. And by doing so in a coalition, different communities can exchange skills and information, prevent conflict, and find new ways to collaborate.

“Indigenous peoples in northern Kenya have for generations been resilient governors and stewards of their land and natural resources in sustainable and long-life ways that are compatible to their food systems, cultures, land use and social organisations,” said Mali Ole Kaunga, director of Impact.

But their lands have in recent years been expropriated for purposes “that the government considers are of higher economic value than pastoralism” – including conservation, tourism, mining, horticulture and clean energy generation, he said. This has weakened community resilience and led to conflicts over natural resources.

The Climate Justice Resilience Fund was created in 2016 by the Oak Foundation and is housed at the New Venture Fund, a public charity registered in the US. The Kendeda Fund became CJRF’s second funding partner in 2017.

It’s now part of a “growing trend in philanthropy that understands people experiencing the most profound impacts of climate change are best positioned to know what they need in order to adapt,” said Anne Henshaw, programme officer at the Oak Foundation and chair of the CJRF review board.