Comment: Environmental regulations are not arbitrary hurdles for enterprise, if this government erodes them how many more people will be buried beneath the mud? 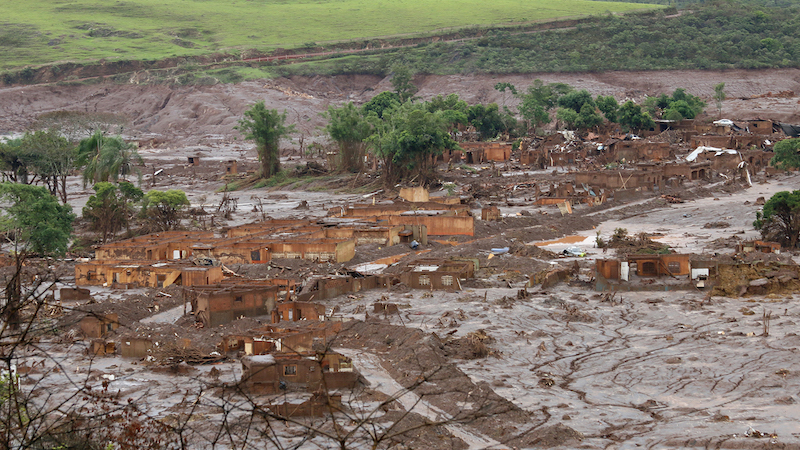 In 2015, a Vale-owned tailing dam collapsed above the village of Bento Rodrigues, in Mariana, Minas Gerais (Photo: Rogério Alves/TV Senado/CC)

By Fabio Feldmann and Suely Araújo

There’s an old saying in Brazil that lightning doesn’t strike twice. On Friday, January 25th, we were all shocked to discover that it does.

In the state of Minas Gerais, a second tailings dam belonging to mining giant Vale SA breached, causing a mudslide that caused hundreds of deaths and an unfolding environmental impact. Vale is one of the controllers of Samarco Mining, whose Fundão tailings dam broke in November 2015 in Mariana, in the same state, in what is regarded as Brazil’s worst environmental disaster so far.

When the Feijão Mine Dam 1 exploded, about 12 million cubic meters of sludge were released into the Brumadinho municipality and the Paraopeba River, a tributary to the mighty São Francisco. While the causes of the collapse are still being investigated, there are a few things that can already be said about the tragedy.

Firstly, the mining industry, in Brazil and in the rest of the world, must get its act together. A complete review of risk, particularly of generation and final deposition of waste, is long overdue. In Brazil alone, hundreds of mining tailings dams may be under threat of a breakup, like in Mariana and Brumadinho, with unthinkable consequences.

‘When the Feijão Mine Dam 1 exploded last month, about 12 million cubic meters of sludge were released into the Brumadinho municipality and the Paraopeba River’ (Source: Nasa Earth Observatory)

Many of those dams are operated by small and medium-sized companies, which is a spine-chilling thought. This makes Brumadinho and Mariana still more unacceptable, since both dams were kept by the world’s biggest producer of iron ore – a behemoth that not long ago advertised itself as “the most sustainable mining company in the world”. Even though Vale must be held to account, the Brazilian federal government also does have its share of responsibility, since it is one of the company’s investors through the National Bank for Economic and Social Development, BNDES.

Secondly, the spill highlights the urge to strengthen environmental licensing and enforcement agencies in Brazil. That need is at odds with some dangerous ideas that have been floated at the political sphere, both in federal and state levels, about relaxing licensing regulations. Those include establishing tight schedules for evaluating projects, reducing public participation and, in some cases, leaving controls entirely in the hands of the private sector. Should those ideas prevail, the private sector itself stands to lose: Vale, for one, saw its market value plummet R$71 billion (US$ 18 billion) in one day after Brumadinho, the biggest single-day drop for a Brazilian company in history.

In the US, the Trump administration has gone as far as determining the number of pages an environmental impact assessment should have and the number of days it should take to be ready. Brazil’s new government has also targeted environmental licensing in its deregulatory impetus, saying that it will make it less bureaucratic. What exactly are they talking about?

No one doubts that there is room for smoothing out some environmental regulations such as licensing, making them smarter and cutting down red tape. It doesn’t follow, however, that environmental governance is an arbitrary set of rules created to encumber enterprise, or that environmental inspection is an “industry of fines” that must be dismantled, as sometimes has been implied. Brazil has come a long way since the 1988 Constitution to establish environmental governance that is aligned with the world’s best practices, based on technical expertise, government control and public participation. Even that system was not enough to prevent Mariana and Brumadinho. We must not throw the baby out with the bath water under the false assumption that businesses will do better this way. They won’t.

The deregulatory approach may also have concrete negative implications for how climate change is addressed. The climate dimension in environmental impact assessments and other decision-making processes needs to be strengthened, not watered down. Projects that generate the least greenhouse gases should be preferred. Infrastructure must be built with adaptation to a warmer climate in mind. Especially as the country already deals with natural disasters, and Brazilian cities are unprepared to face the impacts, as a recent storm in Rio de Janeiro, which left seven people dead, shows clearly.

Robust environmental licensing, including monitoring the operation afterwards, is directly tied to managing the risk of an enterprise. In the case of Brumadinho, regardless how much it pays on reparations, Vale will carry the victims of the tragedy forever in its trajectory. Brazil, in turn, has its image smeared with mud yet another time. How many more?

For the country to be taken seriously and for us to be able to turn indignation into effective policy, we must demand from the mining industry – but also from construction companies, agribusiness and other sectors – a radical change of behaviour. The current pattern of political pressure for relaxing of environmental laws must go at once, leaving in its place a determination to go beyond mere compliance and to adopt true transparency in its practices.

A concrete suggestion involves debating widely and publicly the risk assessment report and emergency plan for each project. In the case of tailings dams, those are in the hands of the licensing agencies and the National Mining Agency. Questions to be answered in these debates include: Did we exhaust all options for starting a mining operation without using a dam? If a dam is really necessary, are people downstream aware and willing to take the risk? Are the proposed safety measures enough to prevent disasters? Are the safety reports made by consulting firms supported by the best technical-scientific knowledge?

Those observations go the way of empowering government agencies that assess and approve high-risk and high-impact endeavours. More specifically, we think Ibama, the Brazilian federal environmental agency, should be strengthened and participate more on the licensing of big mining projects. State environmental agencies do not always have the capacity to fully perform licensing activities, and, given the delicate fiscal situation of Brazil, many may be without such capacity for a good while.

Right now, the debate around changes to licensing and other environmental regulations must be guided by serenity, and not by the high temperature that is typical of new governments. It must, above all, be respectful with the victims of Brumadinho.

Fabio Feldmann is an environmentalist and a lawyer in São Paulo and a former congressman, who worked on the writing of the Brazilian constitution. Suely Araújo is an urban planner and a lawyer with a PhD in political science. She is a former president of Ibama (2016-2018).