The ‘laughing matter’ of Australia’s relationship with the Pacific

Comment: The Fijian PM used the Australian leader’s visit to call out his promotion of fossil fuels, showing Scott Morrison is on the wrong side in the Pacific as well as at home 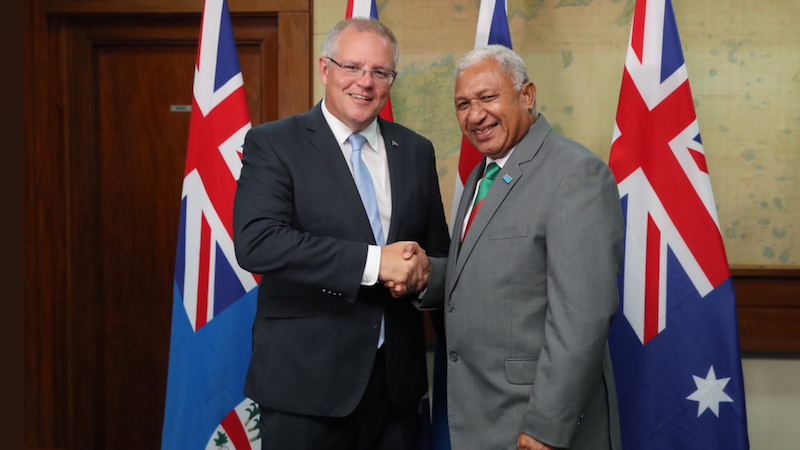 Australia and its Pacific Island neighbours are worlds apart when it comes to the urgency and response to climate change and this week was no exception.

Bainimarama is a seasoned operator who has outlasted seven Australian prime ministers and no one missed his reference. Former prime minister Tony Abbott was once caught by a stray microphone laughing at a joke about “water lapping at [Pacific] doors”.

Bainimarama went on. “I urged your predecessor repeatedly to honour his commitment to clean energy.”

“From where we are sitting, we cannot imagine how the interests of any single industry can be placed above the welfare of Pacific peoples and vulnerable people in the world over,” lamented the Cop23 president at their meeting in the Fijian capital of Suva.

Morrison has only been in the role for half a year, having toppled Malcolm Turnbull in a leadership battle fought in part over climate policy and whether to even have one.  The new PM Morrison is of the no-climate policy persuasion.

Yes, this is the same bloke who brought a lump of coal into the Australian parliament, telling everyone not to be afraid.

Despite overseeing Australia’s steadily increasing emissions and having no policy to reduce them, Morrison claims the country will meet emissions reduction targets “at a canter”.

Worse still, Morrison is doing all he can to subsidise Australia’s fossil fuel industries, which are putting the Pacific’s welfare at risk. He is rushing to fund construction or refurbishment of gas and coal-fired power stations, before a likely May election. Morrison is tipped to lose this election, so he is anxious to lock in more coal by signing binding contracts before leaving office.

This is despite analysis suggesting that new coal power in Australia is actually more expensive than renewables with limited back-up storage by Australia’s public science agency, CSIRO and the Australian Energy Market Regulator.

Undeterred, the Morrison government is encouraging new drilling for oil in the Great Australian Bight, digging more coal out of Queensland (including support for the Adani coal mine) and fracking oil and gas in Western Australia and the Northern Territory. If Australia’s LNG ambitions are reached, it will rival Qatar as the largest gas exporter in the world – adding to its infamous position as the largest supplier of coal.

Knowing all this, Morrison didn’t come empty handed to Fiji. He brought a few trinkets to make up for genuine concern, including an A$2 billion Pacific Infrastructure Fund.

The problem is that A$1.5bn will take the form of concessional loans, which most indebted Pacific island countries can’t afford. Morrison’s colleague and former minister for the Pacific Concetta Fierravanti-Wells was so appalled she published an opinion piece (whilst he was in Fiji) blasting him for the ‘debt-trap diplomacy’. The other AUD$500 million will be grants, cut from existing Australian aid projects. For a A$4billion aid program that has already been trimmed – it is cutting into bone. Recall that Morrison had already shutdown Australia’s support to the Green Climate Fund (GCF), which he decided without the advice (or even courtesy of informing) his Department of Foreign Affairs (DFat).

So it is with some irony that on this trip to Fiji, Morrison announced that DFat deputy secretary Ewen McDonald would head up the newly created Australian Office for the Pacific. McDonald was the co-chair of the GCF board for three of the last six years and helped champion Pacific interests in the GCF, garnering the region’s respect. The capable and well-respected diplomat will have his work cut out for him managing the relationship under Morrison’s direction.

Bainimarama’s speech during Morrison’s visit wasn’t just for the Aussie PM but all Australians. Climate change will impact far and wide, including “Australia as well” he mentioned, “where soaring temperatures have reached record highs in several major cities just this week.” Working from Australia’s capital Canberra, which hit 40C-plus for the third day in a row, the message is resonating here. It’s likely the Fiji PM knows the Australian public is on his side – three in four Australians think the country is already experiencing the effects of global warming, like more heatwaves and extremely hot days, according to the Australia Institute’s 2018 Climate of the Nation report.

Most Australians would agree that climate change is certainly no laughing matter. Given the Australian public’s support for climate action, even for phasing out coal, the next Australian election might at least give the Pacific something to smile about.

Richie Merzian is the climate and energy programme director at the Australia Institute. He can be found on Twitter @RichieMerzian