Comment: The US administration, together with Russia and Saudi Arabia, is forming an axis of climate denial. It is down to grassroots movements to stop them 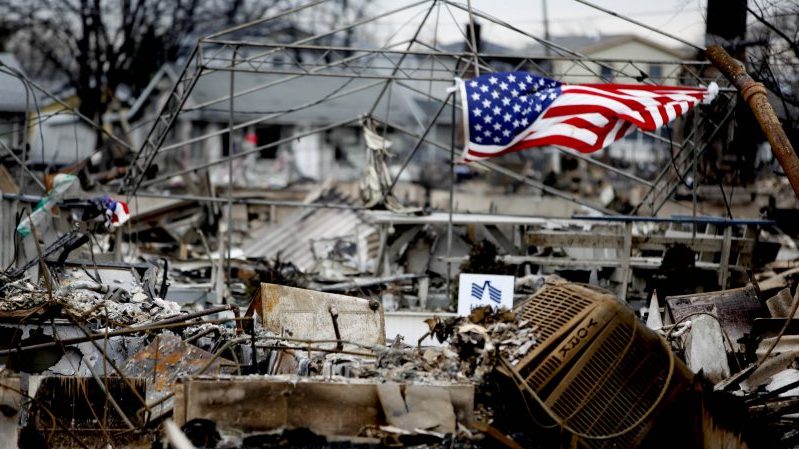 “Moivanna ny tolokandro” was the diagnosis of a single mother I met visiting a remote village in eastern Madagascar.

It was the dawn of 2007, and the island-nation was slammed by an unprecedented and relentless series of cyclones spaced just weeks apart.

“The climate is changing,” she said in Malagasy, rocking her wailing daughter whose body was heaving from malaria, which had broken out amidst the flooding.

I witnessed firsthand, very early in my career, the human face of climate change. For many, it means living in a state of fragility that is nearly inescapable.

During emergency aid efforts, I waded through waist-deep flood water replete with feces and malaria-carrying mosquitoes – the same water that communities had no choice but to drink.

One decade later, an unprecedented number of Americans also painfully understand what climate change feels like. In this year alone, the Camp Fire and Hurricanes Florence and Michael unraveled an unspeakable number of lives.

There’s a time, of course, to mourn the dead. And then there is the time to fight back.

I just returned from the twenty-fourth United Nations climate change conference in Poland, where government delegates were charged with fleshing out the rules that govern the implementation of the 2015 Paris Agreement.

Unfortunately, a new axis of climate-denying nations overshadowed the talks. At this year’s negotiations, the Trump administration banded together with climate pariahs Russia and Saudi Arabia to sideline climate science and protect fossil fuel interests.

This group ultimately blocked acceptance of the findings of the recent UN Intergovernmental Panel on Climate Change 1.5C report into the final set of rules. That landmark report found that we have until 2030 to undergo a fundamental transformation of our energy system to have a final fighting chance against climate change.

By rejecting the report, the Trump administration announced that it values fossil fuel profits over human lives. This axis of climate deniers threatens to entrap the world in a climate suicide pact.

Unfortunately, this shameful act of climate denial, executed on the world stage, derailed this year’s climate talks. Delegates from other countries failed to take the reins and steer the negotiations back on track.

Instead, the rules are riddled with loopholes that allow rich countries to avoid giving finance to poorer countries to address climate impacts. And governments refused to commit to the far more aggressive greenhouse gas reduction targets that science demands.

These outcomes only perpetuate the inequity at the heart of these global climate talks. Wealthier countries, like the US, that have done the most to cause the climate crisis are shirking their moral and legal responsibility toward poorer countries, like Madagascar, that have polluted the least but disproportionately suffer the most.

But climate suicide is not an option. And, if the last two years have taught the world anything, it is that people are rising to resist this end.

In the US, we are witnessing a political sea change. While climate deniers and former fossil fuel lobbyists run federal agencies, grassroots movements against fossil fuels are growing – and winning.

Community members in the rural south have increasingly taken over boards of their rural electric cooperatives. They’re voting out dirty energy choices that endanger the health of their families. Fracking bans have been passed off Florida’s coasts and in Maryland, New York, Vermont and six counties in California.

The grassroots have even reached the steps of Capitol Hill – young people have ignited the movement to reclaim our federal politics to enact a Green New Deal.

The politics of our climate crisis both span the globe and reside intimately in every community.  And the ramifications of our energy choices in the US are felt in communities around the world – including villages in Madagascar – in ways we cannot fully imagine. Every time one community wins a battle against dirty energy, it is an incremental victory for communities everywhere.

These local wins are the face of global climate resistance: city by city, state by state, people are reclaiming power from polluters.

Jean Su is the energy director at the Center for Biological Diversity’s Climate Law Institute.