Comment: If talks in Poland produce tough rules, it will build confidence that all countries are sticking to the climate bargain 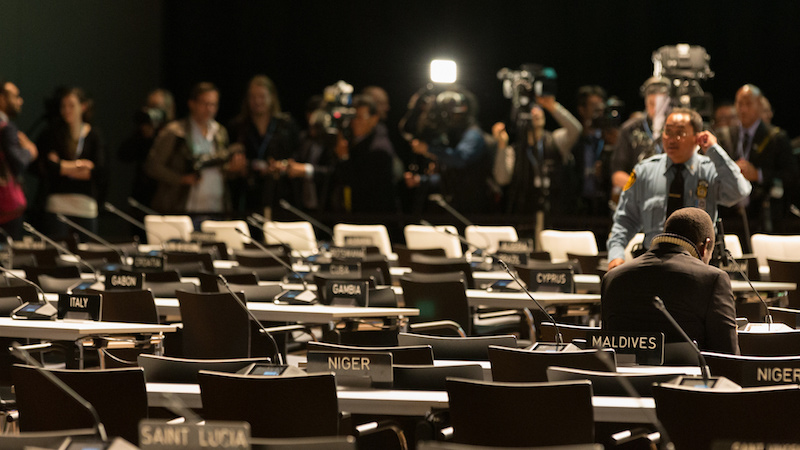 The stage is set for UN talks to begin in Poland on 3 December (Photo: UNFCCC)

Two major objectives for the upcoming UN climate conference in Katowice, Poland, are strengthening climate ambition and adopting the Paris “rulebook”. What is too often overlooked is the intimate connection between the two.

The most obvious measure of climate ambition is the level of effort in countries’ nationally determined contributions (NDCs) under the Paris Agreement. It’s well understood that the first set of NDCs offered in Paris falls well short of the pathway needed to limit warming to 2C, let alone 1.5C.

The implicit aim of the Talanoa Dialogue culminating in Katowice is to inspire and cajole countries to deliver stronger NDCs when the next set is due in 2020. Many delegations and advocates are working hard to ensure that the Talanoa’s concluding decision sets the right expectations by taking the recent grave findings by UN scientists fully on board and calling unequivocally for more rapid pollution cuts.

Alongside this largely political exercise is a far more involved negotiation over the nuts and bolts of the Paris Agreement.  Three years in the making, the Paris rulebook will encompass a raft of decisions outlining operational details in areas including transparency, accounting, implementation and stocktaking progress.

To anyone who’s spent time in the negotiating rooms, the grinding rulebook talks can seem to alternate between impenetrable debates over technical arcana and contentious standoffs over political issues many thought were settled in Paris. It is easy to lose sight of the fact that the rulebook isn’t just about rules – it too, ultimately, is about ambition.

The most important way the Paris Agreement can facilitate stronger ambition is by strengthening confidence among nations that all are doing their fair share – with that confidence, all are more inclined to do more. Countries have long found an all too easy excuse in the inaction of others. Paris can help flip that dynamic.

It can do so by getting countries to be fully transparent about their intentions – and about their performance.  We all need to understand exactly what countries are committing to in their NDCs, how well they are following through, and what’s happening with their emissions. And that requires robust rules.

Over the past year, we C2ES organized a series of informal workshops bringing together senior negotiators from countries in all the major negotiating groups to dig into these issues with an eye toward common ground. A new C2ES report, Essential Elements of the Paris ‘Rulebook,’ offers our distillation of the points of convergence we saw emerge.

The fundamental challenge running through the rulebook negotiations is how to translate the broad strokes, delicate balances, and hybrid structure of the Paris Agreement into clear guidance to parties on how to implement it.

Paris is a hybrid in the sense that it combines a strong bottom-up element (the nationally determined nature of countries’ individual contributions) with a set of top-down features (long-term goals, binding procedural commitments, and ongoing reviews). An effective rulebook must strike a careful balance between national discretion and international direction.

The C2ES report outlines outcomes addressing this and other challenges on issues including: how countries explain their NDCs; how they report on their emissions and their efforts; how those reports undergo expert and peer review; how the new implementation and compliance committee will work; how countries periodically assess their collective progress; and how they communicate on adaptation and finance.

By ensuring strong transparency, the Paris rulebook can provide accountability and can help build confidence in the collective effort. Good rules alone, of course, are not enough. They can show that nations are doing their fair share only if, in fact, they are. And that hinges on a mustering of political will that requires much more than greater clarity on the actions of others.

But that is what the Paris rulebook can offer. By more clearly delineating parties’ expectations of one another, and by providing a durable means of making clear whether they are being met, the rulebook can help instil confidence that progress is being made – and will continue to be made – toward all the long-term goals of the Paris Agreement.

That is why, for the sake of rising ambition, it is important to get the rules right in Katowice.