Leaked memo shows BusinessEurope is preparing to resist a stronger EU 2030 emissions target, ahead of a key climate summit in Poland later this year 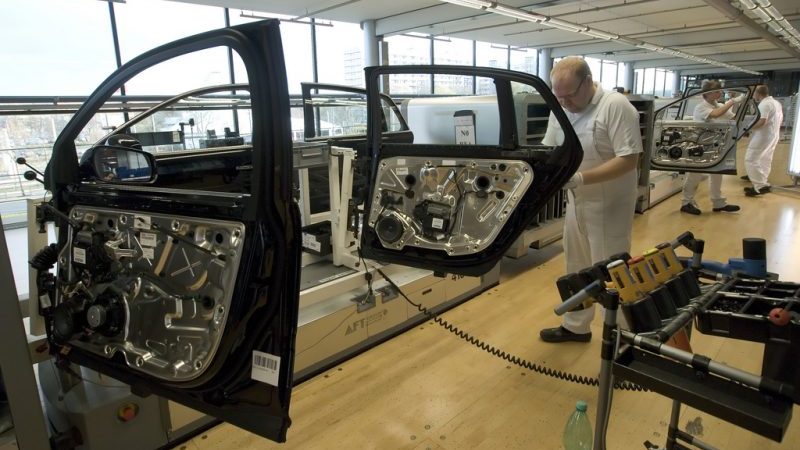 A Volkswagen production line. Some industries argue the EU should wait for other major economies to catch up before raising climate ambition (Pic: Flickr/Dave Pinter)

A leaked internal memo, obtained by Euractiv, gives a rare glimpse into the communication strategy of Europe’s main business lobby group ahead of the COP24 conference later this year, showing how it plans to “oppose” any increase in the EU’s climate ambition for 2030.

The memo from BusinessEurope, dated 13 September, shows how Europe’s biggest employer association intends to “challenge” EU plans to aim higher in the fight against climate change.

The document, which will be discussed at an internal meeting on Wednesday, says the main line to take about the EU’s climate policy should be “rather positive, as long as it remains a political statement with no implications” on the EU’s existing commitments under the Paris Agreement.

Miguel Arias Canete, the EU climate action commissioner, has suggested updating the EU’s greenhouse gas reduction target for 2030, arguing that the EU’s level of ambition had “de facto” been raised after an agreement was struck on renewables and energy efficiency targets earlier in June.

Currently, the EU envisages cutting its emissions by “at least 40%” by 2030 based on 1990 levels. That target would effectively be raised to 45% following the deal on renewables and energy efficiency, Cañete said.

That was later backed by Commission President Jean-Claude Juncker, who said in his annual “State of the Union” address to Parliament that it was “scientifically right” to raise the EU’s climate goals.

But Germany is sceptical of any such move, fearing for the competitiveness of its export-dependent industry.

In August, Chancellor Angela Merkel spoke out against revising the EU’s climate objectives, saying “we should first stick to the goals we have already set for ourselves”.

The internal memo from BusinessEurope follows the same line, recommending “to oppose the new increase in ambition, using the usual arguments” that Europe cannot take action on its own, and should seek a level playing field with global competitors before making any moves.

It suggests “to minimise the issue” by arguing that raising the ambition “is not what matters most. What is key is to persuade other major economies to catch up with the EU’s ambition,” the memo argues.

BusinessEurope also recommends “to challenge the process” by asking for more cost-benefit studies and requiring “more transparency on the calculations”.

Tara Connolly, a climate campaigner at Greenpeace, denounced the “political manoeuvring” by BusinessEurope at a time when Europeans are “feeling the devastating effects of climate change first hand” – with a summer heatwave and drought that saw the EU dig deep to bail out helpless farmers.

“The European Commission has a responsibility to move forward and ignore the spin, the lies and the delaying tactics of Europe’s dinosaur corporations. It would be irresponsible to fall for this scaremongering and ignore the huge economic, health and environmental damages of climate change,”Connolly said.

Germany has a track record of challenging the EU’s climate ambitions. In June, German Energy Minister Peter Altmaier rejected calls from a group of other EU countries to boost the share of renewables to 33-35% of the bloc’s energy mix by 2030.

This article was produced by Euractiv and republished with permission