Comment: As the economy surged in 2017, experts are divided over whether emissions stayed flat. It could mean pollution has peaked more than a decade earlier than expected 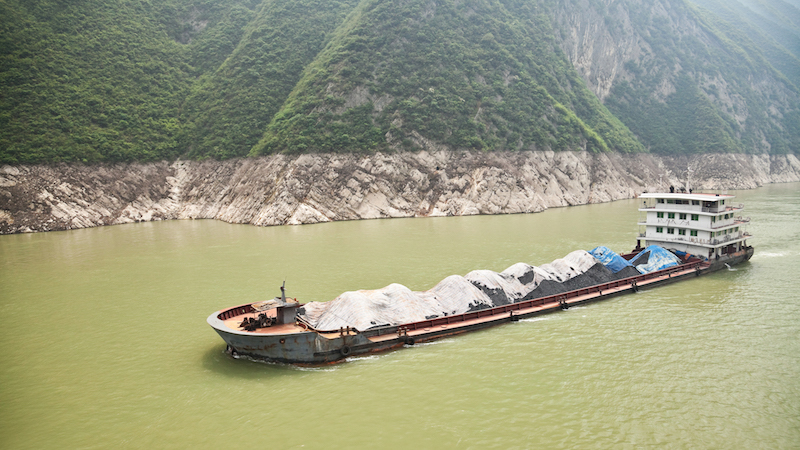 With China’s official energy statistics for year 2017 being gradually released, the annual debate over whether the world’s largest carbon polluter has peaked its greenhouse gas emissions faces a watershed moment.

The results will be a litmus test for whether the country’s economic growth is becoming independent from its greenhouse gas emissions: a better-than-expected annual growth rate of 6.9% marks the first time in seven years that China’s economy is growing faster than the previous year.

Climate officials in the country are busy consulting with various energy and carbon experts, in part to gauge whether or when China will need to change its official predictions for carbon emissions growth, according to one expert being consulted.

China has said it will peak greenhouse gas emissions no later than 2030, and cut carbon intensity – the emissions per unit of economic growth – between 60 and 65%, as part of its commitments to the Paris climate agreement.

That pledge was made in 2014, since then declining coal use – due to both slower economic growth and increasing investment in renewables – has led some researchers to suggest that China’s emissions may already have peaked in 2014.

In 2017, the revival of some smokestack industries as local governments tried to prop up local economies earlier in the year, an unprecedented coal ban in northern China to curb smog since heating season started in November, and a subsequent natural gas crunch as residents switched to the cleaner fuel to keep warm all complicated calculation of energy consumption last year.

In November, the Global Carbon Project (GCP) estimated China’s carbon emissions would grow by 3.5% in 2017.

“But the slight increase does not make carbon emissions higher than what was in 2014. I still hold the viewpoint that China’s carbon emissions may have already peaked around 2013 and 2014,” he said.

Qi Ye and Liu Jiaqi with Brooks-Tsinghua Centre for Public Policy, estimated China’s coal consumption has likely rebounded by around 1% in 2017, yet the country still burned “far less” coal than in 2013.

They also challenged GCP’s conclusion, citing inappropriate use of data sources. “Using the GCP estimation approach, we calculate that China’s overall emissions increase in 2017 would be closer to 1%, instead of 3.5% – still lower than the 2014 level,” they wrote in an op-ed published in January.

Lauri Myllyvirta, an energy analyst with Greenpeace in Beijing, has a different estimate.

“The officially reported emissions and emissions estimated by BP and IEA were only down marginally (at 1-2% or so) from 2014 to 2016,” he wrote in an email.

“It is quite possible that an about 3% increase in emissions in 2017, as implied by government preliminary data, will mean that 2017 emissions are higher than 2014,” he said.

Measuring China’s carbon emissions has never been an easy task. But a more accurate judgement of China’s emission growth curve is critical for China to consolidate its self-proclaimed leadership in international climate talks.

“If China’s carbon emissions have peaked in around 2014, there will be quite a gap between [reality and] what China has pledged – to peak no later than 2030,” Yang said. But he admitted there will still be uncertainty as the economic growth in 2017 is still partially fuelled by the “old engine” of heavy industry and construction.

Whether or not China’s carbon emissions have reached a peak, experts all agree that it will occur much earlier than previously expected.

Myllyvirta noted that China’s emphasis on “high-quality” growth, cleaner and less emissions intensive, together with continued clean energy growth would mean that there is scope for a much earlier CO2 peak.

Jiang Kejun, a senior researcher at the Energy Research Institute under China’s National Development and Reform Commission, said: “There is a convergence among mainstream energy experts in China that a carbon emission peak is likely to occur in early 2020s.”

But that does not necessarily mean China will revise its nationally determined contributions, according to Jiang.

“In its pledges, China also said ‘it will peak as early as possible’, that actually already covers the scenario of an earlier peak; but this part is often neglected,” he said.

Li Shuo, a senior policy adviser with Greenpeace, said the shift in climate policy in the US meant there was little impetus for China to upgrade its own pledge to the Paris deal, known as a nationally determined contribution (NDC)

“China could get pressured [to ratchet up its pledges] if major emitters are all going beyond their commitments and are about to enhance their NDCs – this is simply not the case now,” he said.

But China could tap an earlier peak in carbon emissions for more gains in international climate diplomacy. This year’s climate talks in Poland will see intense politicking over the rules for the Paris deal and a strong call for greater ambition. China would be smart to use an upgrade in its own NDC to gain concessions from other big polluters.