Peru ends era of ‘roadless wilderness’ in its Amazon rainforests

Comment: Roads spread destruction and deforestation in the Amazon, now Peru, driven by neoliberal imperatives, plans a highway for one of the regions most sensitive forests 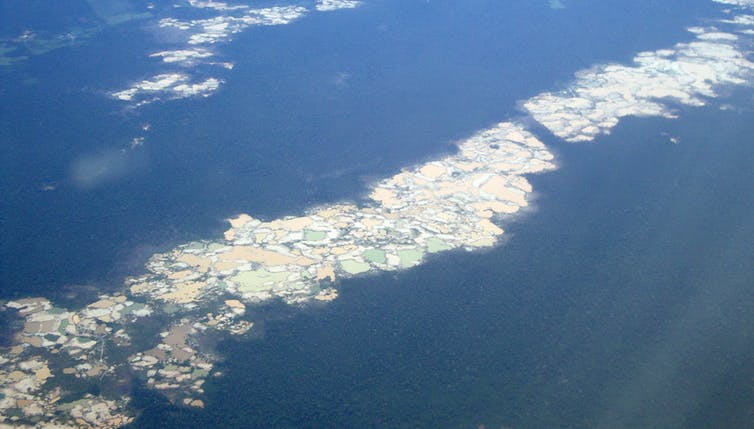 This vast wilderness of 2m square km of rainforests and savannahs is formed of the headwaters of three major river basins, the Juruá, Purús, and Madeira. Nowhere on Earth can you find more species of animals and plants than in this corner of the Amazon that rubs up against the feet of the towering Andean mountains. These forests are also home to a culturally diverse human population, many of whom still live in voluntary isolation from the rest of humanity.

In 2012 I spent a hectic few days in the exhausting Madre de Dios region, literally Spanish for “Mother of God”. I was there at the invitation of the Peruvian tourist board, which wanted to raise awareness of the region’s potential. In the lush lowland rainforests our team of ornithologists recorded more than 240 bird species in a few hours. These included the Rufous-fronted Antthrush, a near-mythical sighting among birders and one of a number of vertebrate species discovered by scientists there in the second half of the 20th century. It, and many others like it, are found nowhere else.

This part of Peru has long been cut off from the rest of the world in splendid roadless isolation. Globalisation has been knocking at the door for decades however, and it may now have a way in thanks to a development plan to facilitate transportation across the continent: The Initiative for the Integration of the Regional Infrastructure of South America (IIRSA). If seen to fruition it will effectively end road-free wilderness in the Amazon.

The Peruvian Congress recently approved a bill declaring it in the national interest to construct new roads in the Madre de Dios region. These spurs of the IIRSA’s continent-spanning Interoceanic Highway will include a road connecting the remote towns of Puerto Esperanza and Iñapari, which will cut through a mosaic of different protected areas. 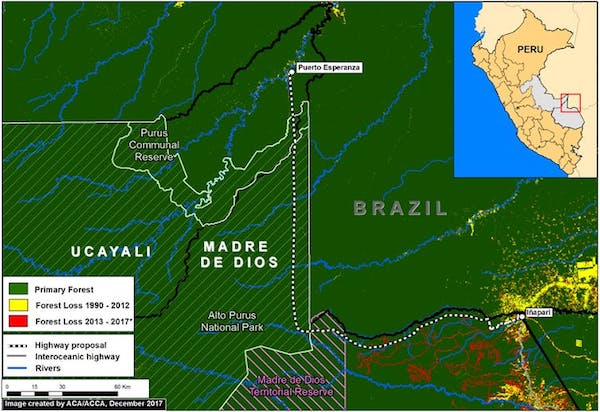 Roads and rainforests are a bad combination. As colleagues and I found in our research, the direct impacts include roadkill or the immediate loss and isolation of habitat. For many rainforest animals, like the aforementioned Rufous-fronted Antthrush, roads are barriers for dispersal. Antthrushes are birds of the dark humid rainforest understorey, which shun the light and have limited powers of flight. They cannot move through landscapes subdivided by humans.

But we also found these direct problems are followed by even bigger indirect impacts. Roads allow access to the forest. An influx of money brings an influx of people involved in extractive activities. More logging and gold mining. As the big valuable trees are thinned out for lumber, the sun reaches the forest floor and the humidity is lost. In the next dry season fires will stalk through the forest.

Even in areas spared from conversion to the cattle pastures which have already swamped the eastern Amazon, those forests left standing near roads are degraded shadows of their former selves. With their communities of plants and animals altered, antthrushes and other specialist rainforest species that depend on them will suffer.

These new roads, threatening the integrity of one of the most biologically and culturally diverse places on Earth, are justified as “strengthening the national identity” of the remote Purús region. They are also billed as an opportunity to reduce the cost of goods and services and hence welfare of those “trapped” in remote towns accessed only by river.

It seems highly unlikely that the migration into the region of people and their pathogens, drugs, and material goods will help the identity of some of the world’s last remaining uncontacted indigenous tribes. By fragmenting their homelands, the roads will inevitably spark the sort of conflicts with loggers, hunters and narcotics traffickers that already plague the Brazilian Amazon.

Concerns about welfare and national identity can scarcely mask the reality. These regional integration plans are shaped by neoliberal imperatives to boost the global competitiveness of certain export sectors over all other infrastructure, and will see massive profits for large Brazilian multinationals and Chinese investors. Under IIRSA’s model of geographically uneven development any local short-term social and economic benefits will be undermined by disruption to crucial ecosystem services such as water balance or climate regulation.

This threatens the future viability of other sectors the government also wants to expand such as sustainable forestry and ecotourism. Not to mention regional biological and cultural diversity. The future of the western Amazon hangs on a knife edge.

Alexander C. Lees is lecturer in tropical ecology at Manchester Metropolitan University. This article was originally published on The Conversation. Read the original article.