We are [not] still in: can the world ever trust US again on climate?

The US has always been an unreliable actor on climate change. This month’s sideshow to UN talks in Bonn only emphasised its internal conflicts 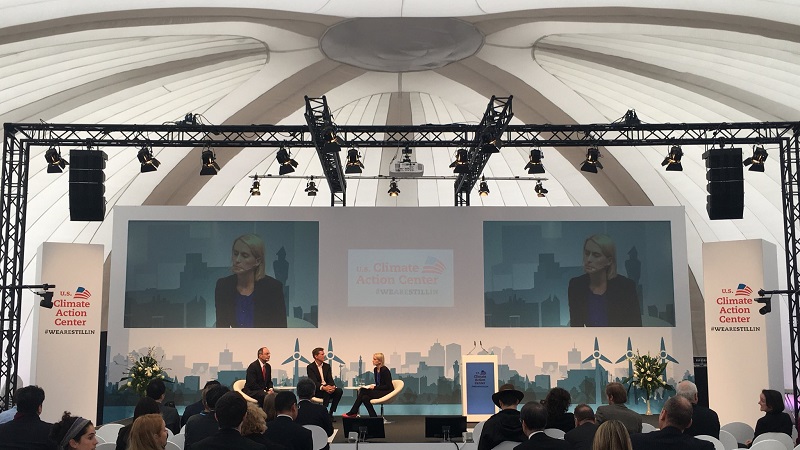 Inside the 'ice cave' of the US Climate Action Center, on the sidelines of UN negotiations in Bonn, companies and subnational leaders pledged to act despite their president's stance (Pic: twitter/We Are Still In)

Entering the white domes of the US Climate Action Center at UN climate change negotiations in Bonn, Germany this month was a surreal experience.

A low hum of fans was ever present, holding up the plastic domes, capable of fitting 200 people in the four big rooms. The whole thing was windowless. Smaller rooms at the back were low-slung and white, like being in an ice cave, or a bunker deep underground.

Visitors were plied with bling: tote bags, lapel pins, lanyards and stickers proclaiming “America’s Promise: We are still in.” Attendees at the UN negotiations could be seen proudly sporting them on their suit lapels.

In the ice cave halls and conference rooms were dozens of events with business and political leaders and titles like “Walmart and Mars, Inc.: The Business Case for Action on Climate” and “U.S. Subnational Climate Progress: Harnessing Market Power to Drive Meaningful Greenhouse Gas Reductions.” I was on one in the ice cave at the back, called “Engine of Ambition: University Research and Engagement to Support Climate Action.” The attendance and energy at the events was substantial, and the free expresso and snacks didn’t hurt.

To the Americans who showed up in the domes, there was definitely some catharsis in proclaiming our continued commitment to the Paris Agreement, which of course has now been signed by every other country on the planet. The center probably fulfilled its goal of helping to staunch potential hemorrhaging by making it a little harder for other actors like Russia or Saudi Arabia from following President Donald Trump in announcing their withdrawal from the pact. And of course, it was a great opportunity for corporations like Walmart, Mars and Microsoft to get kudos their efforts on climate, and hopefully to inspire and shame laggard firms on the benefits of such actions.

But to some outsiders, it all seemed a bit over the top, a bit too noisy, and a bit too emphatic. One European told me it seemed very egotistical, like the whole world needed to hear again and again about how “We are still in!” And to have to hear yet again about America’s internal, domestic, problems on full display.

Countries are supposed to come to global negotiations with one position, but the clamor of the #WeAreStillIn campaign leaves the rest of the world slightly heartened, but also deeply confused. What is this country – the world’s largest historical emitter – going to do? If the country is going to come back into the Paris Agreement, then, when will it? Under what conditions will it do so? Will it only after be after Trump is out of office? Or will Trump himself change his mind and stay in? Will Trump attempt to extract concessions from the world community?

There seems to be nearly no appetite for making such a compromise, since the US joined and made a pledge just two years ago saying that we actually cared about climate change. So in spite of the confusion and distraction from the US, the world is forced to move ahead without us.

The fact is, the US has always been an unreliable world citizen when it comes to climate change diplomacy. We have always been extremely demanding, with exceedingly small “win sets” available for presidents to get a vote in support by the supermajority of US senators required for international treaties.

Since the beginning, the US fought any rights being granted for poor countries to development, or for their compensation in the wake of damages caused by climate change. We forced carbon trading mechanisms into the Kyoto Protocol text way back in 1997 and then George W. Bush promptly “unsigned” it upon his inauguration in the spring of 2001. Under his administration the US was downright difficult in the negotiations, and whole new negotiating bodies of the agreement had to be built to provide a pathway back into the agreement expected in 2009 in Copenhagen.

Despite his being awarded a Nobel Prize for doing almost nothing but saying he’d act more multilaterally, in his first term Barack Obama’s negotiating team was still difficult for many countries to deal with. We fought a binding agreement in Copenhagen in 2009 and were part of the renegade group with China, India, Brazil and South Africa who entirely transformed the regime’s architecture.

Instead of dividing up the burden of reducing emissions by scientific needs and criteria of equity and responsibility for creating the problem, the Copenhagen approach led by Obama was entirely bottom-up. Each country was able to make its own pledge based on its own politics and economy, and then the rest of the countries gets to review the country’s progress on meeting that voluntary pledge.

Though eventually accepted by nearly every country in the world, the most vulnerable developing countries were deeply skeptical of the system, which scientists showed would lead us to inadequate, and potentially disastrous, climate (in)action. In his first term, Obama almost never talked about climate change, and hid his funding efforts for climate assistance to developing countries deep in his budget requests to a hostile Congress.

Then came Obama’s re-election, when he started actually talking about the urgency of climate change, and directed his new Secretary of State John Kerry to lead an all-out push for a new deal in Paris. The joint announcement of Obama 2.0 with China in November of 2014 broke a logjam, and a worldwide agreement was struck in Paris a year later. Still inadequate and uncertain in its durability, it was significantly better than what came before it.

Upon his election, Trump’s disparaging campaign remarks about “cancelling the Paris Agreement” threw immediate cold water on the talks. His appointment of Scott Pruitt who is taking a wrecking-ball to domestic climate policy undermines the ability of the US to credibly say we will meet our Paris pledge from just two years ago. The endless palace intrigue and unclear signals from the White House about exactly what our national policy entails has tied our global partnerships in knots.

The ability of the world to negotiate an outcome in Bonn this month in this situation is something to appreciate. The US negotiating team in the end was not uncooperative. And the reality is that the US cannot formally withdraw until four years after the treaty came into effect—which is exactly the day after our next presidential election.

But the fact is that even if the US does not in the end withdraw from Paris and even if it comes in enthusiastically under its next leader, our credibility is deeply damaged. Four years of hard work to build trust in our nation’s ability to be a leader on climate are gone: who could trust an unreliable leader?

This is the question that did not get asked, out loud at least, inside the plastic ice caves of the US climate action domes in Bonn. Will other nations ever be able to trust the world’s largest historical emitter and wealthiest nation?

As an American, this tells me that the loud proclamations of #WeAreStillIn and the touting of public-private partnerships in inflatable domes needs to take place inside and outside another inflated dome: the Capital. We need to get our house in order.

Timmons Roberts is a professor of environmental studies and sociology in the Institute at Brown for Environment and Society in the USA. He is co-author of over 70 articles and 13 books, including Power in a Warming World (2015, MIT Press).