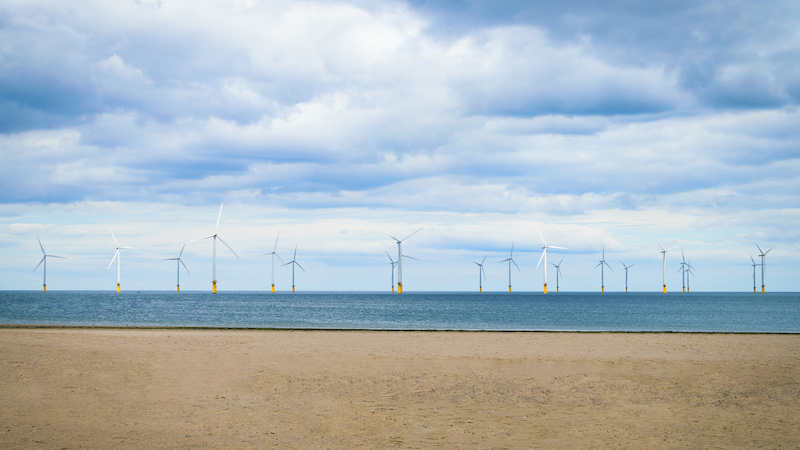 Offshore wind has seen a huge drop in price in recent auctions in the UK (Photo: Deposit Photos)

The UK government emphasised the economic benefits of tackling climate change on Thursday as it unveiled a long-awaited clean growth strategy.

Promising billions of pounds worth of investment in offshore wind power, electric vehicles and technology innovation funds, it set a bullish tone for low carbon industries.

Climate minister Claire Perry told parliament “the opportunities are absolutely enormous”, in stark contrast with the Trump administration’s rhetoric across the Atlantic.

The government said the strategy showed the UK was “leading the world in cutting carbon emissions to combat climate change while driving economic growth”.

According to its own report, however, the raft of policies does not go far enough to meet legally binding emissions caps from the mid-2020s onwards.

Under the UK’s 2008 Climate Change Act, the government must stick to a series of progressively tightening “carbon budgets”, set by the independent Climate Change Committee. That model has been copied by other states.

Emissions are set to exceed the fourth carbon budget (2023-27) by 6% and fifth (2028-32) by 9.7%. If necessary, the government suggested, it could make up the difference by banking over-achievement from earlier carbon budgets or buying international offsets.

As the policies get fleshed out, Perry said she expected that gap to close. “My sense is: given the ambition, given the pace of change, given the extraordinary changes in the cost and adaptation of new technology, we will actually comfortably exceed these targets,” she said.

The Climate Change Committee (CCC) welcomed the strategy’s “new thinking and ambition” but warned the government could not rely on “flexibilities” to deliver.

“This should not be the plan,” said chair John Gummer. “The clear intention of the UK’s fourth and fifth carbon budgets is that they are delivered through domestic action to keep the UK on the lowest cost path to the 2050 target to reduce emissions by at least 80% compared to 1990 levels. That should be the goal, without the use of accounting flexibilities or reliance on international carbon credits.”

“The intention to bank credits is not an excuse for failing to plan,” lawyer Jonathan Church told Climate Home. “Banking over-achievement should be a last resort.”

The UK has not had to submit a national plan to the Paris deal as the EU makes commitments as a bloc. That will change after Britain leaves the EU.

“We may well be increasing the overall ambition of our targets at some point, so meeting them should be an absolute minimum,” said Church.

The clearest winners from the package are electric vehicle and offshore wind industries.

In line with a previously announced deadline to phase out traditional car sales by 2040, government announced £80 million ($105m) for electric vehicle charging infrastructure and £1 billion ($1.3bn) in subsidies for EV buyers.

There will be £557m for renewables developers competing in auctions, with the next one scheduled in 2019. Encouraged by recent sharp cost reductions in offshore wind bids, the strategy called for another 10GW to be built next decade.

Pots of money for research and development of clean technology in various sectors add up to £94m.

Carbon capture and storage, a technology assumed in most climate models to deliver a large chunk of decarbonisation, is in line for up to £100m. That is a tenth the amount promised – and cancelled – by previous governments to develop a commercial scale pilot.

Oliver Rix, energy partner at consultancy Baringa Partners, described it as “a fairly insubstantial sum” that was “unlikely” to get an end-to-end project off the ground.

Absent from the strategy was any substantive policy for aviation and shipping. International transport is projected to account for a growing share of global emissions if not tackled. In the UK, the CCC has warned government-backed plans for a third runway at Heathrow Airport risks blowing emissions targets.

“The strategy’s ambition is to be welcomed, however the details fall short of what we need to lead the UK to a green and prosperous future,” said Gareth Redmond-King, energy and climate lead at WWF.

“The UK Government has much more work to do in putting forward credible policies to close a carbon gap of nearly 10% by 2032. We have been a global climate leader, but if we set out plans that don’t meet our own targets to meet the global threat of climate change, then we will have so much further to go to meet the more ambitious international ones agreed in Paris.”

On Wednesday, the UK teamed up with Canada to announce an alliance that will encourage countries to commit to phasing out coal power. The UK has said its last coal station will close by 2025.