‘Issue for the left’: how climate change can shake this tag

Comment: A new poll shows the view that climate change is mostly a left-wing concern is prevalent and problematic. It’s time to change the conversation 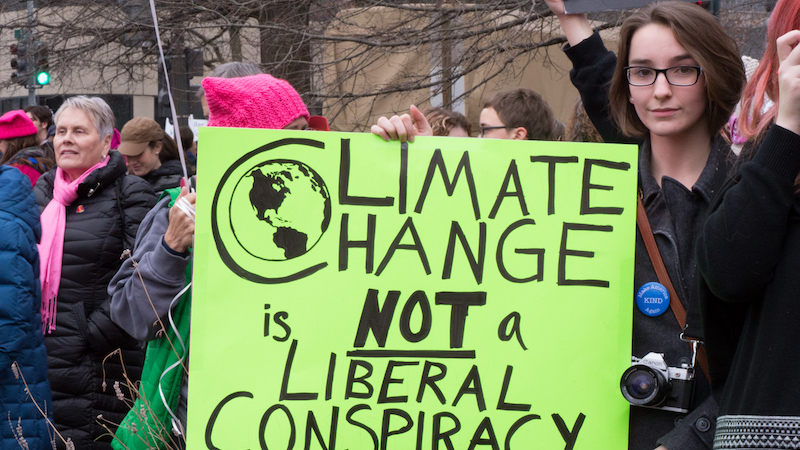 "The perceived liberal skew of climate change was greater than the perceived conservative skew of immigration, national debt and defence"(Photo: Mark Dixon)

“Climate change has emerged as a paramount issue for the left.”

From some people that might have been a celebration of how progressives have united in the face of global warming. But US vice-president Mike Pence didn’t mean it as a compliment. For him, linking climate change and the left was a way of delaying action.

The idea that climate change is a left-wing plot should be easy to refute. Concern about rising emissions are visibly not restricted to anti-capitalists. This year alone, warnings about climate change have come from members of the not-left-wing community that include Walmart, US secretary of defence James Mattis, and BlackRock, the world’s largest asset manager.

But Pence wasn’t shooting in the dark. A new opinion poll shows he was tapping into a widespread belief that people on the left are more worried about climate change. The poll, conducted by the research agency PSB for my book, The Climate Majority, and reported here for the first time, reflects a problem that could stop the world doing what’s needed to avoid dangerous warming.

The survey asked people in the US which type of person is most likely to be worried about various issues. Across the range, climate was the issue most identified with liberals, more than both inequality and housing. Respondents were more than twice as likely to say that liberals are most worried about climate change than that a person’s political views don’t make a difference. It was seen as the most partisan of all the issues tested: the perceived liberal skew of climate change was greater than the perceived conservative skew of immigration, national debt and defence.

This is a problem for efforts to avoid dangerous warming. As long as climate change is thought of as a partisan battleground, it will be hard to persuade enough people that it is a serious threat.

Mike Pence knows this. He was following the strategy that Republicans have used for more than 20 years, of casting doubt on the motives of people who warn about climate change. His immediate audience may be conservatives, but the people who really matter are those in the centre. His aim is to persuade them that climate change is a matter of debate between entrenched partisans, with the truth somewhere in the middle.

The delaying strategy has worked quite well so far. The difficulties of passing a climate deal through the US Congress delayed the arrival of an ambitious international climate deal for years. And while the US has cut its emissions recently – by around 9% in a decade – it started doing so later than many other rich countries and its emissions are still around their mid-1990s level.

But while polarisation has already slowed action, the greatest problems are still ahead. Past emission cuts have mostly come from relatively easy areas like improving efficiency and switching from coal to gas. Eventually these will be exhausted and further emissions cuts will have to come from areas closer to most people’s day-to-day lives like food and transport.

So long as climate change is seen to belong to the left many people will be tempted to think the threat is exaggerated and that such changes can’t really be necessary. In that case, how can the polarisation be ended?

First we should emphasise that worries about climate change aren’t in fact restricted to the left, whatever the perception might be. Respondents in the opinion poll were asked how they themselves see each issue, as well as how they think other people see them. And while liberals were indeed the most likely to be worried about climate change – 82% said they were – moderates were also widely concerned, with 73% saying they were worried about it.

So the challenge isn’t to persuade moderates to worry about climate change: they already do. Instead, the task is to stop them thinking that climate change worries people on the left more than it worries other people. That isn’t going to be achieved with more trench warfare between left and right – that only increases the appearance of partisanship.

Instead, we should change the subject. The question of how the world could deal with climate change is full of controversial possibilities, yet most of these controversies are ignored. Among these ignored debates are: whether the best way to reduce polluting activities like flying is to put up the price, meaning only richer people do them; whether communities should have the right to veto cheap renewable energy projects; whether land should be used to grow energy crops at the risk of increasing food prices; and whether the government has a duty to protect all communities from rising sea levels.

What these many controversies have in common is that they provide conflict about climate change without depending on disagreements about whether global warming is real or on only using voices from the left. The debates would show that people from across the political spectrum consider climate change a serious threat, while being contentious enough to interest non-specialists.

The beauty of this approach is it makes it impossible for Mike Pence and his colleagues to maintain their pretence that climate change is a left-wing issue. Instead of talking about whether the world should deal with the problem, the debate moves on to what it should do about it. People whose only argument is that climate change is a left-wing interest would have nothing to say on the debate. Either they engage with the new controversies or they become irrelevant.

Mike Pence and his allies are slowly losing the fight on climate change. Many of them have already had to abandon the claim that climate change is a hoax. But the issue is still seen as a left-right battleground, which persuades many in the centre that it matters much less than it does. A slow victory isn’t enough if the world is to cut emissions quickly enough to prevent disastrous warming. If we are to speed up action, we should try changing the subject.