Comment: Representatives of four Pacific island nations join today at the IMO in London to ask the shipping industry to do its part to cut carbon emissions 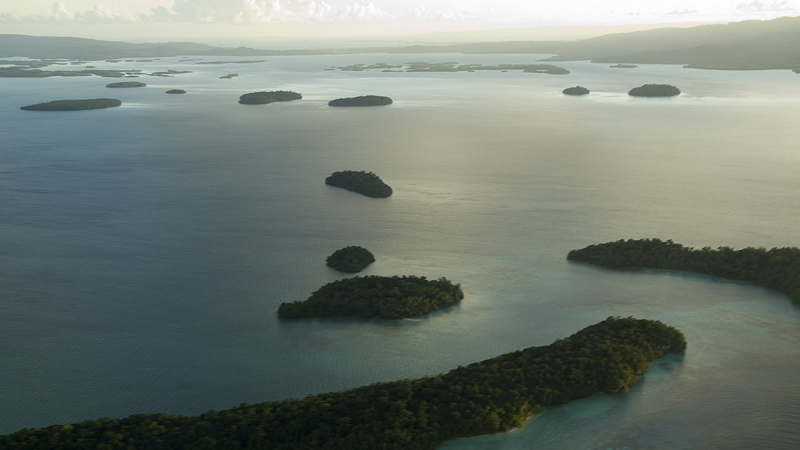 Low-lying coral atolls like the Solomon Islands are vulnerable to climate change and reliant on a shipping industry, which refuses to control its emissions (Photo: UN Photos)

Rising seas have already contributed to the loss of five of my country’s islands. More are expected to disappear as our shared planet warms.

So for me the UN climate and shipping talks taking place in London this week are not just about the technical details.

They’re personal. My people are relying on me to deliver.

Two years ago my friend and former Marshall Islands foreign minister Tony de Brum travelled to London on a mission.

He wanted the world’s shipping industry to recognise it had a contribution to make to fighting an enemy we Pacific Islanders know all too well: climate change.

He wanted this vast sector that keeps the global economy ticking over to do its fair share in our common fight. No more, no less.

And he wanted – in his words – to ensure he left a world where his children and grandchildren could still live in their ancestral home on Majuro, and not face eviction due to rising sea levels.

Tony isn’t with us in London this week, as UN negotiations to deliver a climate deal for shipping start at the International Maritime Organisation, but he’ll be there in spirit.

He has passed the baton to a new generation of Pacific ministers and we are determined to fulfil his desire of ensuring everyone pulls their weight on this – the most existential of issues.

Pacific leaders have consistently, via the 2015 Suva Declaration and in many international fora, pointed to the grave and in some cases existential threat faced by small island states if global warming is not kept below 1.5C.

Shipping has a key role to play here. Research commissioned by the UN shows that without action, maritime emissions could multiply 50-250% by 2050, blowing the 1.5C goal sky high.

If that does happen, the atoll and low lying small island developing states (SIDS) are in the front line and will be impacted first and hardest.

These SIDS are also arguably the most dependent on maritime transport, not only for economic development but in many cases for food, fuel and basic necessities of life.

Furthermore, these SIDS already face the highest maritime transport costs per capita in the world with the most vulnerable supply lines.

All studies to date indicate that any effects on transport cost arising from shipping adopting a decarbonisation pathway will likely be disproportionately felt in such states.

Nevertheless we can and we must clean up a sector responsible for 2-3% of global greenhouse gas emissions.

In the spirit of the Paris High Ambition Coalition, the Solomon Islands, Marshall Islands and fellow Pacific brothers and sisters are joining forces with France, Germany and other EU member states in London this week to call for shipping to finally take climate change seriously.

We request that the level of ambition at the IMO should be high, in line with shipping agreeing to a reduction in its emissions based on a global target that keep global warming within no more than 1.5C.

It is further requested that this level of ambition be confirmed in the initial strategy to be agreed in 2018. This would send a strong signal and meaningful contribution to ongoing UN climate talks.

The sooner the shipping industry openly acknowledges the decarbonisation pathway needed, the sooner investment decisions and infrastructure developments can be aligned.

This is crucially important for a sector which has long-lasting assets (ships and ports) which risk becoming stranded assets as a consequence of future GHG mitigation policy – and with potential for severe negative consequences on the shipowners, flag registries and other industry actors.

A high level of ambition implies early agreement to a target for the shipping sector, setting the earliest possible date for peaking global shipping emissions and agreeing on the trajectory toward decarbonisation of the sector.

A high level of ambition will also reiterate the message to the world – and the US president in particular – that the UN can still deliver on humanity’s most pressing problem.

In 2015, nearly 200 countries approved the Paris Agreement. In 2017, the 172 members of IMO have the opportunity to underline their commitment to Paris. The world is watching, and waiting.