US president promised to read the pope’s encyclical Laudato Si’, which exhorts humanity to care for the environment 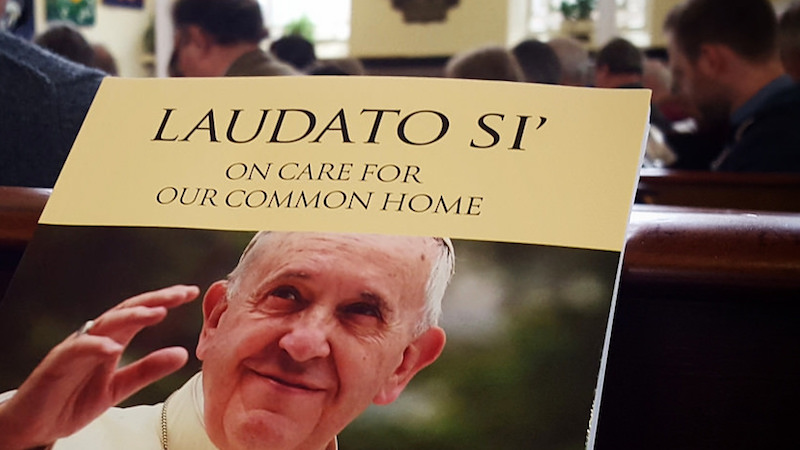 Pope Francis gave US president Donald Trump a copy of his encyclical on climate change when the two met in the Vatican on Wednesday morning.

According to reports from the presidential press pool, Laudato Si’, the letter on environmental stewardship Francis wrote in 2015, was given to Trump along with other religious texts the pope has written.

The pope also handed Trump a signed copy of his World Day of Peace message about nonviolence, saying: “I signed it personally for you”.

According to pool reports seen by The Hill, Trump promised Francis he would read them. The letter on ecology alone runs to 184 pages.

The presentation happened after the two men met privately on Wednesday morning. The agenda for their conversation was reported by CNN to include climate change.

The climate encyclical begins with a prayer from St Francis of Assisi, from whom the pontiff takes his papal name and who is often associated with early Christian environmental thought.

The pope’s message calls the climate a “common good” and notes the “very solid scientific consensus” on the changes being wrought by carbon pollution.

“Many of those who possess more resources and economic or political power seem mostly to be concerned with masking the problems or concealing their symptoms, simply making efforts to reduce some of the negative impacts of climate change,” the encyclical reads.

Trump has questioned the science behind climate change and is considering whether he will withdraw the US from the Paris climate agreement. His budget, released in full on Tuesday, nixed US assistance to poor countries to help them tackle climate change.

Trump’s meeting with the pope comes days before he heads to Sicily to sit with G7 leaders. The president has said he would make up his mind about the Paris accord after that meeting.

A series of global leaders have urged him to keep the US in the process. Germany’s Angela Merkel was the latest to do so, in a speech on Tuesday.

Francis’ encyclical was lauded when it first emerged – in the months leading up to the pivotal Paris climate conference – as a dramatic intervention from an institution that had been marked by conservatism under other leaders.

Trump has said in the past that he rarely, if ever, has time to read. But even if he dips into the pope’s climate decree, it may not have the desired effect.

A survey published on Tuesday by the Annenberg Public Policy Centre (APPC) at the University of Pennsylvania found that, in the US at least, the pope’s message had failed to make conservative catholics more concerned about climate change. It did however, raise awareness of climate change among liberally-minded catholics.

Lead author Asheley Landrum said: “To use a political analogy, the pope excited his base. Liberals who had already expressed concern about climate change agreed more with the Pope’s message that climate change will disproportionately affect the poor.”

Read more on: US | World | Pope Francis | Trump US