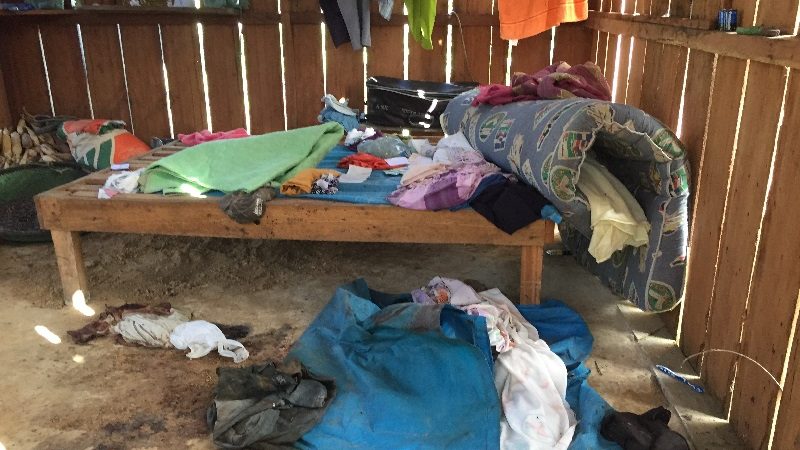 House of farmer-squatter and evangelical pastor Sebastião de Souza in Taquarussu do Norte, Brazil; his body was found on the floor with a machete in the neck (Photo: Fabiano Maisonnave)

Nine men were stabbed or shot dead on 19 April over a territorial dispute in a remote area of Mato Grosso state, deep in the Amazon rainforest.

In the afternoon, hitmen swept through the land in question, known as Linha (road) 15, killing everyone they found. Some of the bodies bore signs of torture.

The worst land-related slaughter Brazil has seen in 21 years reflects a chronic ambiguity around land rights. On this lawless frontier, far from the gaze of the authorities, forest clearance and conflict go hand in hand.

The rampage happened in a remote region, accessible only by an unpaved road. The closest city, Colniza, is a 7-hour-drive in the dry season; when it rains, it can take days. Communication here is so hard that the police were not notified of the crime until almost 24 hours later.

On 26 April, Climate Home was the first and so far the only media to visit the crime scene. The journey involved an hour’s flight in a rented aeroplane followed by a three hour drive in a 4×4 vehicle.

Around 120 families live in a rural community called Taquarussu do Norte, a smattering of wooden houses with water wells and bathrooms in the backyard and no electricity. Several of them are the offspring of settlers who colonised the neighbouring state of Rondônia in the 1970s and 1980s. Now, they have found their own land to farm. Known as posseiros, or squatters, they have no legal claim and take their chances with the inconsistent law enforcement.

Fearing more attacks, most inhabitants left the region after last month’s violence, especially women and children. In the area where the slaughter took place, dogs roamed inside the houses in search of food and their deceased owners.

Last week, state police arrested two men they suspect of carrying out the murders on the orders of a timber merchant, who is still at large. Squatters, however, said they had a good relationship with loggers (all of them illegal) and blamed unnamed rival farmers for the attack.

Pastor of the Assembly of God Church in Guatá, about 140 km north of Taquarussu. He was one of the squatters of the area subject of dispute, known as Linha (road) 15. Previously in 2014, his home at the site was burned down. He was found with a machete buried in the back of his neck.

Fábio dos Santos, 37
A father of four and member of de Souza’s congregation, dos Santos worked mainly as a bricklayer. Pastor de Souza hired him to clear the land – the day rate for labourers is about $17 in the region. He lived in Guatá and had no land.

Ezequias de Oliveira, 26
A squatter in Taquarussu, de Oliveira’s lot is outside the disputed area. He was onsite working as a day laborer and also belonged to the Assembly of God.

Edison Antunes, 32
Another squatter who was working in Linha 15 as day laborer. He was the deacon of the local Assembly of God and left four children.

Aldo Carlini, 50
Also working as day laborer, Carlini had a lot in a neighbouring area.

Samuel da Cunha, 23
A newcomer from the neighbouring state of Rondônia, da Cunha was also working as a day laborer when he was killed. His lot was outside the disputed area.

Valmir do Nascimento, 55
Found with his hands tied behind his back, do Nascimento was one of the three squatters killed who had a lot in the area under dispute. He left two sons.

Izaul dos Santos, 50
A squatter in Linha 15, last year dos Santos paid $34,000 for 200 hectares. He was pending trial for murder. His son and daughter-in-law were two of the four people who were in the area during the slaughter and escaped with their lives.

Francisco da Silva, 56
One of the five squatters who were there as day labourers. In 2015, Ibama (the environmental protection agency) fined da Silva $36,000 for the illegal deforestation of 22 hectares, but he never paid it.

Everything in Taquarussu runs informally. Despite the fact they have occupied some 20,000 hectares since the early 2000s and that selling and buying lots are common, none of the families has land titles. As one squatter who asked to remain anonymous put it, “the only document is our presence here”.

The two government agencies in charge of land regulation of that area disagree about who own the land. Incra (the Brazilian Federal Agrarian Reform Agency) said it belonged to Mato Grosso state. Intermat, the state land management agency, said it had belonged to a private owner since 1984, but could not name the owner.

This imprecision is no exception. Official figures gathered by Imazon, an non-profit research institution, show that there are about 160,000 land claims pending regularization.

Moreover, there are 71.3 million hectares of public vacant lands in the Amazon, an area twice the size of Germany. These are vulnerable to illegal logging and land-grabbing, according to data gathered by another independent research institute, Ipam Amazônia.

“Land regularization in the Amazon is an essential requirement for conflict reduction, curtailment of deforestation and implementation of more sustainable policies in the region,” says an Imazon report published last month.

Under Brazilian law, 80% of any rural property in the Amazon must be preserved as primary vegetation. Prior authorisation from federal or state environment agencies is needed to cut any forest. In practice, squatters flout these rules with impunity.

Cláudio Gonzaga, a prosecutor in Cotriguaçu, an Amazon town not far from Colniza, said politicians and local merchants were typically the ones to lead and finance land-grabbing of these areas, taking advantage of the infamously slow Brazilian judicial system and feeble law enforcement.

The invasion process, described by Gonzaga, includes a topographical survey for land division, illegal logging in order to finance the whole process and eventually the use of cleared land for crops or ranching. By the time the authorities catch up, tens or hundreds of acres of forest may have been destroyed.

Besides feeding violent conflict, the legal uncertainty is a major impediment in fighting deforestation, according to Evandro Selva, the regional head of Ibama, Brazil’s environmental protection agency.

“In most cases, our effectiveness depends on land regulation agencies,” said Selva, who led a raid on Taquarussu in 2015, in a phone interview. One of the squatters who died in the slaughter was fined for deforesting 22 hectares.

“During the inspection, the farmer-squatters argued: ‘How can we get a deforestation authorisation if we don’t have the land titles?'”