Comment: We are really bad at predicting Chinese emissions. Why do we think we know what happens next? 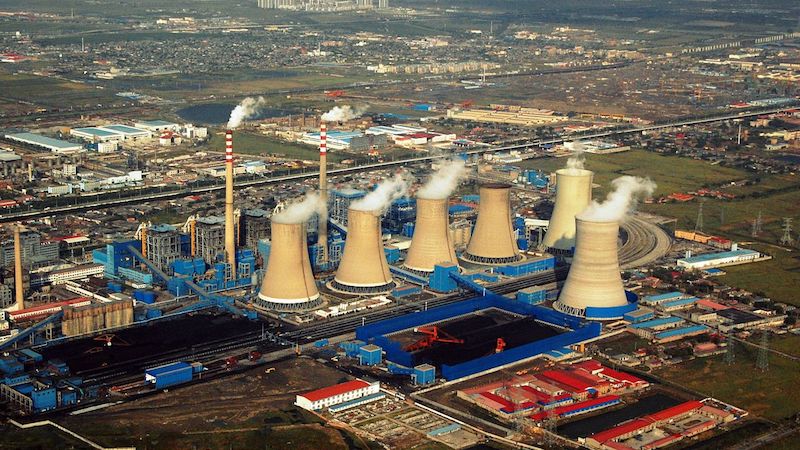 China's emissions trading scheme will target coal power plants, like this one in Tianjin. But the restrictions have not yet been made clear (Photo: Shubert Ciencia)

When it comes to predicting future emissions, China is a good example of how bad we are.

In the 2000 World Energy Outlook, the International Energy Agency (IEA) estimated that Chinese emissions would be 18% of the global total in 2020, in 2015 the actual value was 29%.

Being fair to the IEA, no one else predicted the growth in Chinese emissions during the 2000s. One of the biggest uncertainties in climate policy is our ability to predict the future.

This is China’s strongest statement yet on climate action

Given this, be cautious of statements that Chinese emissions have peaked.

Long term assumptions that China has low emissions per person have been shattered: China now emits more than the EU28 per person, and is well above the global average. 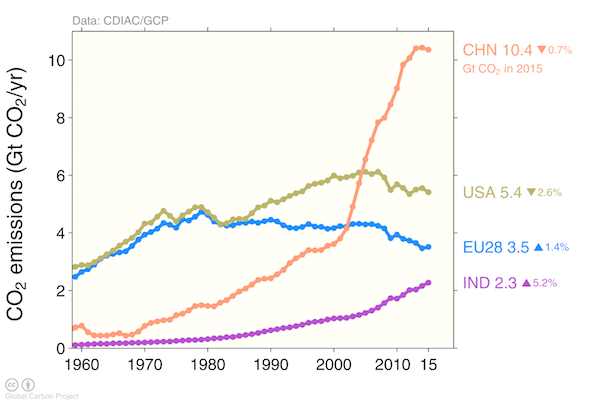 Why has Chinese emissions growth slowed?

The Chinese emissions story is really a coal story. The growth in non-fossil energy sources in China has been truly impressive, but don’t let this cover up the more complex story about coal. 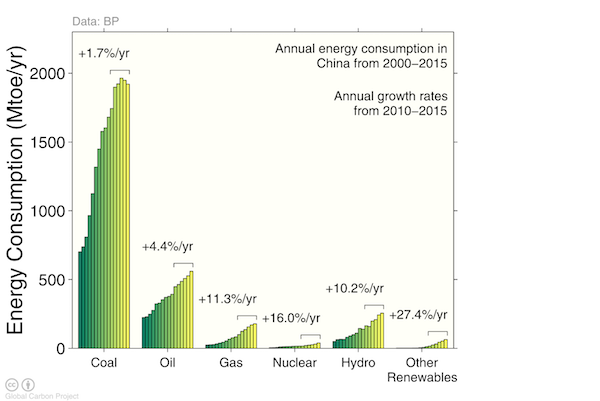 Primary energy consumption is dominated by coal in China, and coal is behind the 2000s growth and the 2010’s slowdown. All other energy sources are growing fast, but from lower levels.(Source: Cicero)

Why has coal consumption declined?

One important point is that growth in total primary energy consumption has slowed. This is really driven by a weakening economy, GDP growth rates are much lower now than they were in the 2000s. Less economic activity, means less energy consumption.

There has been an improvement in energy efficiency of the economy, but this is more of a recovery from the lower improvements in the 2000s when the Chinese economy was booming. 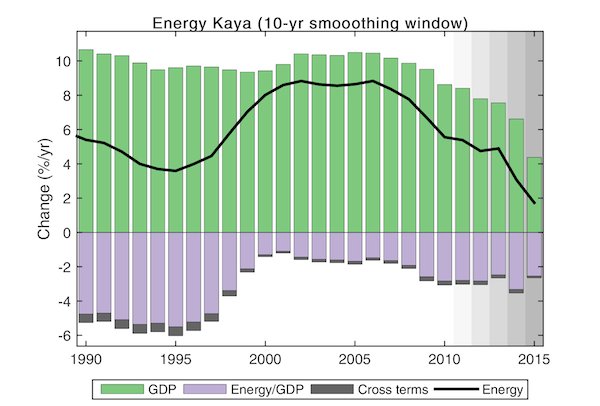 The role of renewables and air pollution policies

The “war on coal” sounds impressive, but this may just be a smart rhetorical deflection from continuing economic woes. The coal is still there, it is just that coal power plants are running less of the time.

A recent study estimated that a decline in construction activity explained about three-quarters of the decline in coal use. This is since construction requires energy-intensive inputs of products such as cement and steel.

Economic woes are behind the recent slowdown in Chinese coal consumption and emissions, but growth in renewables and concerns about air pollution contributed. 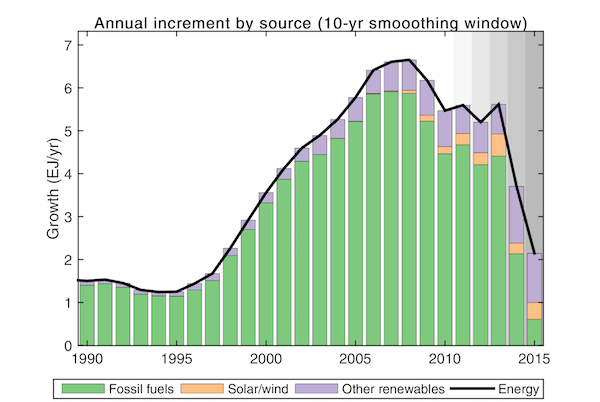 China has pledged to reduce its emission intensity (CO2 emissions per unit of economic activity) to 60-65% below 2005 levels by 2030, increase the share of non-fossil energy to 20% of total energy consumption in 2030, and to peak carbon dioxide emission before 2030.

Just taking the emission intensity target alone, this will put a peak in Chinese emissions around 2025-2030. This reflects that the different pledges are all rather consistent, and not independent.

There are some simple mathematics behind a peak in Chinese emissions.

Assuming China follows through on its pledges, a peak may still be 10 years away. But, do the recent trends indicate otherwise?

For Chinese emissions to peak earlier, either economic growth has to be slower than expected, or emission intensity has to decline faster than expected (or both).

There is certainly an inconsistency between China’s pledge and current emission trends. If economic growth targets are met (as they always are), then the emission intensity has to decline faster than pledged. This is quite plausible, particularly if there is a continued slowdown in the output of energy-intensive products.

It is much more unlikely that Chinese emissions have absolutely peaked, in the sense that they will soon decline. Cancelling the development of new fossil fuel infrastructure does not reduce emissions.

To be consistent with a 2C target, Chinese emissions would have to go down as fast as they went up, and that is unlikely without retiring existing fossil fuel infrastructure.

China’s emissions may be near a plateau, but unlikely that we will see emissions trend downwards to be consistent with a 2C target. 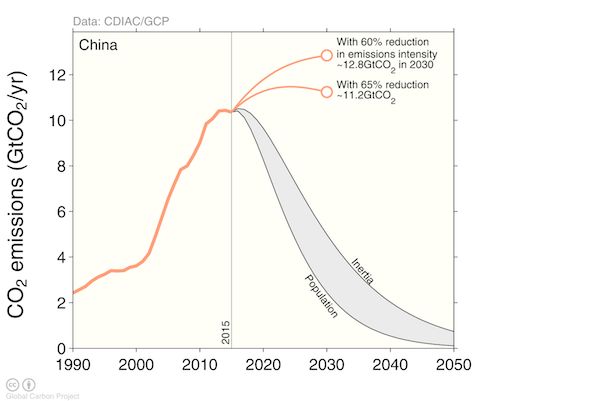 Should we trust Chinese data?

Chinese statistics can be confusing, and even the best experts in the world have doubts.

Perhaps the biggest source of uncertainty in Chinese coal statistics are the revisions. The extent of the revisions are easy to see using the BP Statistical Review of World Energy, which is based on official Chinese statistics and BP’s own sources.

Successive releases of the BP statistics can undergo substantial revisions, most of which are due to the Chinese Economic Census conducted every five years or so.

One notable feature is the significant underreporting of coal consumption around 2000. This followed a government crackdown on small coal mines, which simply kept running but stopped reporting.

Given recent government crackdowns, the recent dip in coal consumption may be a case of data not being reported. Though, given the slowdown in the output of energy-intensive products, there is some independent evidence that the slowdown is real.

There has also been a much larger drop in production data compared to consumption data, and this is the cause of much confusion. This could reflect significant changes in stock piles, trade patterns, or bad reporting.

Care is required not to over interpret Chinese coal consumption data, and make sure to cross check with other independent indicators. 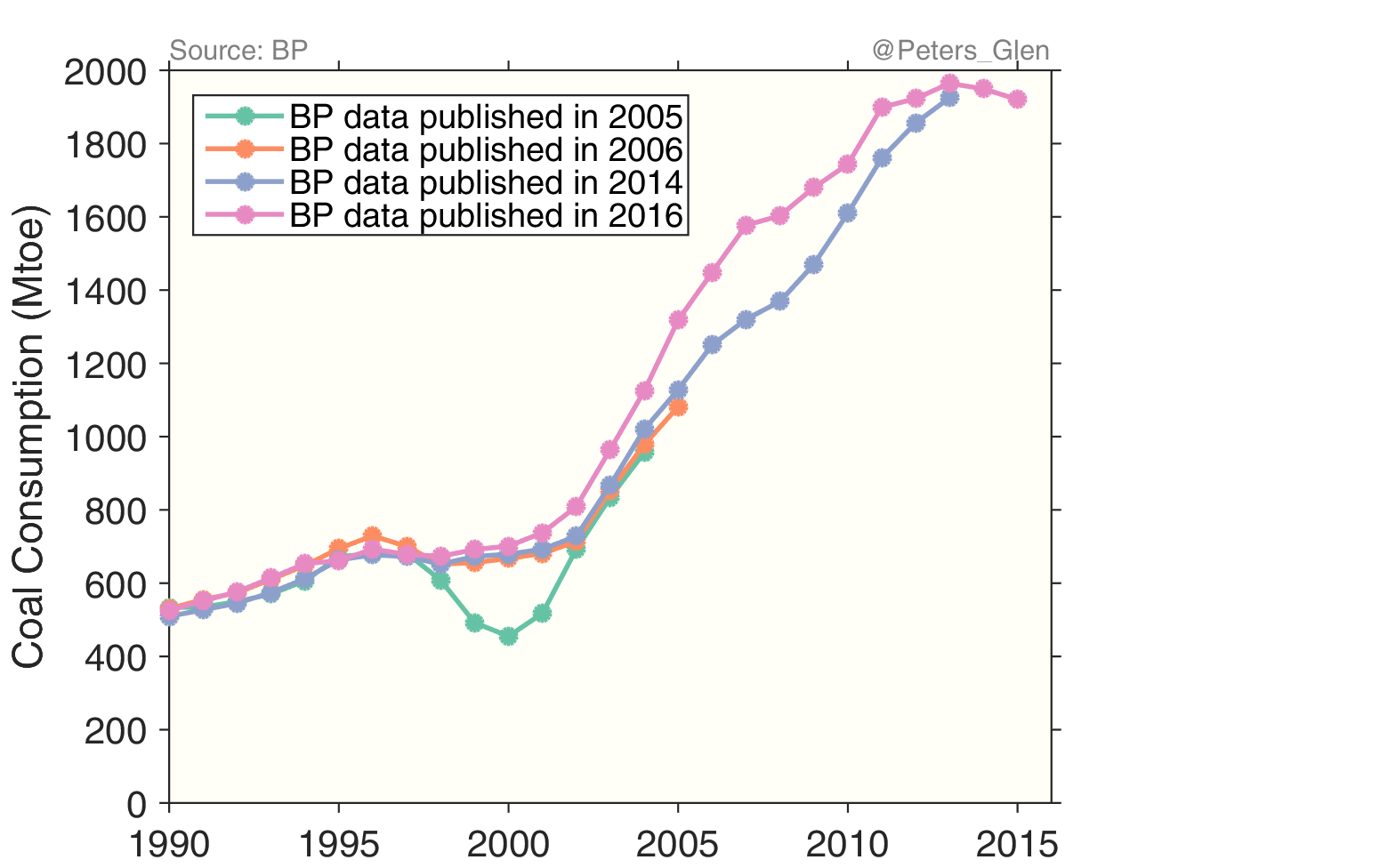 Annual revisions in Chinese coal consumption as reported in successive versions of the BP Statistical Review of World Energy. The BP data is based on a combination of official Chinese statistics and internal BP sources. (Source: Cicero)

Glen Peters is a senior researcher at the Centre for International Climate Research (Cicero).