We already have a magic technology that sucks up carbon

Comment: Why have emissions plans that rely on removing carbon from the air with unproven technologies when forests can do it today? 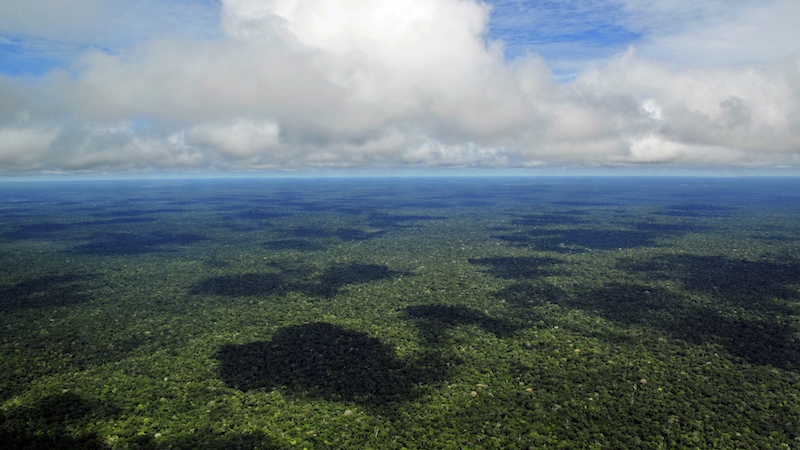 The Amazon rainforest, near Manaus, the capital of the Brazilian state of Amazonas. (Photo: Neil Palmer/CIAT)

By Julia Christian and Hannah Mowat

Last week’s article on carbon capture and storage made an important point : we can only meet the Paris Agreement’s 2C target if we find a way to remove carbon from the atmosphere.

What options do we have to do this?  The authors of last week’s article point to different carbon capture and storage (CCS) options, including bioenergy with CCS. The 2C pathways developed by the Intergovernmental Panel on Climate Change (IPCC) all depend heavily on CCS.

But as climate scientist Kevin Anderson pointed out after 2015’s Paris conference, CCS leaves us gambling our future on a “carbon-sucking fairy godmother”. So far the deployment of this technology has been very limited, and it is very unlikely to be rolled out quickly enough to provide the negative emissions we need.

Bioenergy with CCS (Beccs) is even more fantastical. The technology has become a hot topic, as climate policy experts become more conscious of the need for negative emissions. With Beccs, carbon is captured from the air by growing trees, burning them to generate energy, and then burying the emissions using CCS. The trees are then replanted and the cycle begins again. In theory, the more trees we burn and bury, the more CO2 is sucked out of the air.

It is a beguiling idea. But like many compellingly simple quick fixes, it just doesn’t work.

First, like CCS, it essentially doesn’t exist – no Beccs project is yet operational. As with CCS, this makes it a risky answer to our need for negative emissions, which requires large-scale action as quickly as possible.

Second, because Beccs has never been put into practice, it is counting on several assumptions that quickly unravel when faced with reality. For Beccs to reduce atmospheric carbon, the trees it burns need to be replanted – or the emissions it sucks from the air will be cancelled out by the loss of carbon sinks.

Will those trees really be replanted? The signs in the real world are not good. The countries that depend most on biomass for energy – such as Romania and Slovakia – do a very poor job of ensuring harvested trees are replaced.

“You could cut down the Amazon, turn it into a parking lot, ship the trees to Europe to replace coal, and Europe would claim a reduction in emissions,” argues Tim Searchinger of Princeton University.

Burning trees in a power station causes an immediate release of all the carbon they contain. But the replacement trees will take many years to grow big enough to soak up the same amount of carbon. This is time that we simply don’t have.

In addition, biomass development in practice has tended to replace more biodiverse woodlands with monoculture plantations, which absorb much less carbon.

But Beccs really starts to look impossible when we think about how much land it would require.

For Beccs to generate enough negative emissions to hit 1.5C, we would need about 5 million square kilometres of land – more than the total land area of the EU. At the same time, the world’s population continues to rise, and demand for agricultural land has never been greater. Schemes like Beccs threaten food security on a vast scale, pushing the rural poor – already facing serious danger from climate change – to breaking point. 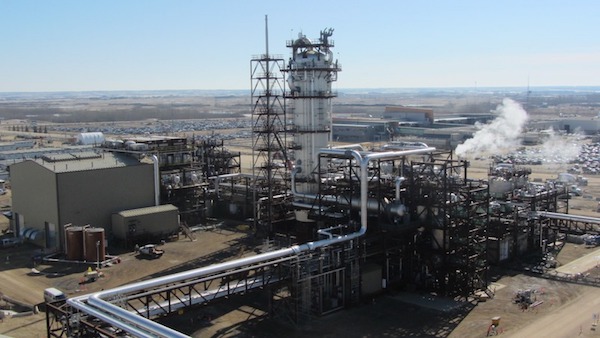 A carbon capture and storage facility in Alberta, Canada, where the technology is used to assist in oil exploration. (Photo: Ramsey Martin)

What else is left? The authors of last week’s article say we need to develop new technologies to deliver negative emissions. There are various ideas floating around, based on geology or chemistry. But it is almost impossible that any of these will be available at scale in the short time we have.

Fortunately, we already have a “technology” that could help us get out of this situation: forests.

Not biomass plantations, but natural forest landscapes that have been degraded in recent years.  The Stockholm Environment Institute (SEI) recently concluded that simply allowing degraded forest areas to regrow could pull up to 330 billion tonnes of additional CO2 out of the atmosphere over the 21st century.

Coupled with a reforestation programme less that a third the size of what is required by Beccs, this would put the world on track to achieve the 1.5C temperature goal of the Paris agreement. In short, we need to “make forests healthy again.”

This is our best, most realistic bet for the negative emissions we need. But we must be careful how we do it.

Just like Beccs, forest restoration done the wrong way could put lives in danger. Forest conservation projects have a well-documented history of displacing indigenous communities from the land they need to survive.

This is bad for both people and forests. In places where communities have truly been given control over forests, such as in Guatemala’s Maya Biosphere Reserve, the impact on forest quality has been impressive: deforestation rates in community-controlled areas are a mere 5 percent of those in nearby state-run “protected” areas. To be effective, forest restoration must fully respect the customary rights of local communities, putting them in the drivers’ seat of decision-making rather than treating them as an inconvenience to be relocated.

There are no easy solutions to our need for negative emissions.

Experimental technologies will do too little, too late, or be too risky. The only “technology” available at scale – natural forests – is already under pressure from numerous sources – some legitimate, some not so much. Forests can provide part of the solution, and we need to do more to invest in the community-driven approaches that give us a chance at success. But we need to be realistic about how far this will take us.

All of this reinforces how important it is that we stop using fossil fuels as quickly as possible. We cannot count on “carbon-sucking fairy godmothers”, as the Paris Agreement currently does, to save us.

Julia Christian & Hannah Mowat are campaigners at the NGO Fern. Fern released a report in October 2016, Going Negative, which provides more detail on some of the points made in this piece.