Trump timeline: week one of the US climate action crackdown

In the first seven days from inauguration, we track the key events of Donald Trump’s push to fry the planet 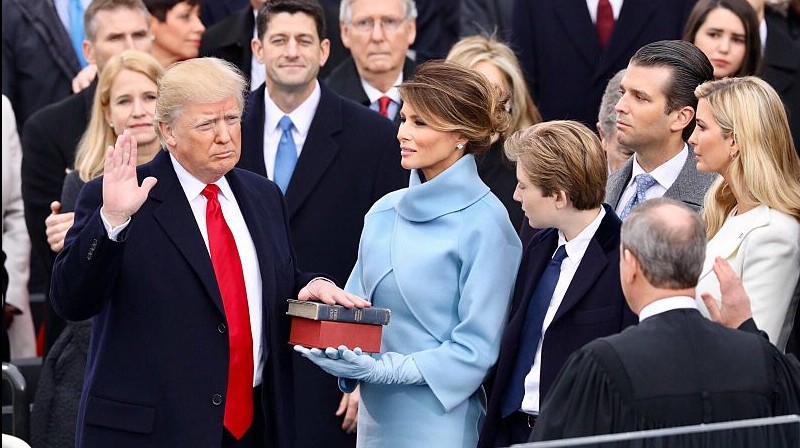 Donald Trump being sworn in as US president (Pic: White House photo)

Ever feel like the news is coming too thick and fast? It can be hard to keep up with Donald Trump’s destruction of his country’s reputation as a leader in climate science, policy and diplomacy.

Help is at hand. We will be updating this page regularly to get every reversed climate regulation, suppression of inconvenient science and throwback to the fossil fuel age in Trump’s first week.

Who knows, there might even be the occasional cause for hope. No promises. Have we missed something? Contact me at [email protected].

Did they jump or were they pushed? Either way, four top career officials left the State Department the day their presumptive next boss Rex Tillerson dropped in.

Meanwhile, dozens of positions remain unfilled, both in Foggy Bottom and embassies around the world. Not a great sign for anything that requires multilateral cooperation…

As a career diplomat,I experienced many transitions & never saw anything like this dangerous purge of public servants now underway at State

At the Environmental Protection Agency meanwhile, Trump’s team appear to have backed down on a demand to delete the climate change webpage. But Myron Ebell, who headed its transition for the administration, is talking about halving the workforce.

The incoming administration called a social media moratorium for federal agencies, according to multiple reports. But some defied the gag order.

A series of tweets from Badlands National Park, South Dakota, listed facts about the impact of greenhouse gas emissions on the environment. They were deleted within hours and blamed on a rogue former employee. Golden Gate National Park Service tweeted a gif of global temperatures rising.

I think we should be very clear that what is being called “defiance” in this instance is sharing straight scientific facts about climate. https://t.co/kYmpPY1FTH

Reuters reported that the Environmental Protection Agency – responsible for regulating emissions – had been asked to remove the climate change page from its website. At time of writing, the page was still up.

The pipelines have become a potent symbol of the struggle between business-as-usual job creation and a post-fossil fuel vision.

Activists were quick to tell Trump they were ready to put their bodies on the line to stop the diggers.

An unnamed employee described it as extraordinary, raising concerns about the impact on core operations. But Myron Ebell, who ran the EPA transition for Trump, played down the significance.

“This may be a little wider than some previous administrations, but it’s very similar to what others have done,” he said.

The Centers for Disease Control and Prevention quietly cancelled a conference on health and climate planned for next month.

A former director of the body told E&E Climatewire it could be an attempt to get onside with the Trump administration. “Sometimes the agency is subject to external political pressure; sometimes the agency self-censors or pre-emptively stays away from certain issues,” said Howard Frumkin.

More or less the instant Donald Trump took the oath of office, the White House website flipped. Out went the page on climate change, in came the “America first” energy policy.

Top of the agenda was slashing “burdensome regulations on our energy industry”. Lest there be any doubt on which rules were for the axe, it spelled out: “President Trump is committed to eliminating harmful and unnecessary policies such as the Climate Action Plan…”

In one of those lies, fabrications and distortions soon to be rebranded “alternative facts”, the site claimed this would increase US wages by more than US$30 billion over seven years. Climate Central debunked the figure.