The photogenic Canadian promised a new politics and talked tough on climate, but his embrace of three oil pipelines in as many months tells a different story 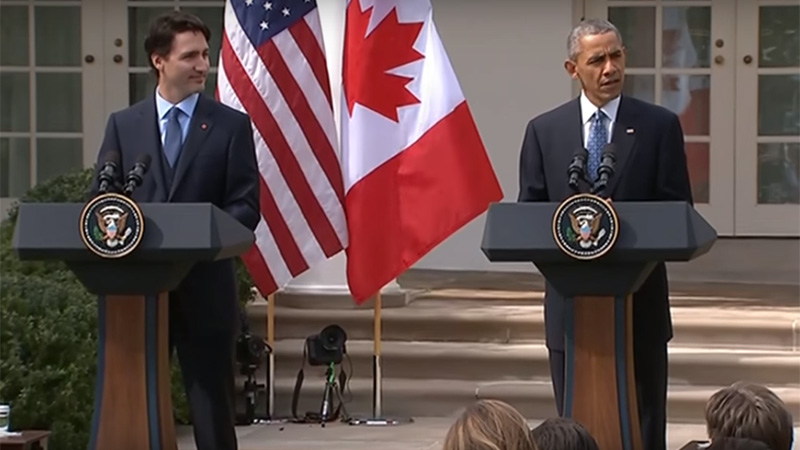 “It’s about doing the right thing and doing the smart thing… we need to act to build a better future with a cleaner environment and better jobs.”

Canada’s Justin Trudeau there, speaking to a school kid in November 2016 who asked him what he’d say to a world leader who thought climate change was baloney (just imagine).

Roll on a few months and the guardian of climate scientists, banshee of warming disasters had this to say about the construction of a vast oil pipeline through Canada and the US.

“I’ve been on record supporting Keystone XL… we know we can get our resources to market more safely and responsibly while meeting our climate change goals.”

Keystone XL, it is estimated, would carry 800,000 barrels of tar sands oil every day over nearly 900 miles. It’s dirty stuff, by anyone’s reckoning. Each barrel would have a carbon footprint 17% higher than conventional oil, said the State Department.

Truly, you might say, Trudeau is a man for all seasons, presidents and energy mixes. Usually the last one that he happens to spot.

To place this in context, this is a man who has keenly – and successfully – tried to rebrand Canada as a climate progressive, pushing it back into the heart of UN climate summits.

Where before the North American energy giant was seen as a blocker, Trudeau directed his media-savvy environment chief Catherine McKenna to play a central role in securing a global climate deal.

At UN climate summits in 2015 and 2016 McKenna talked passionately about the dangers of climate change to Canada, the perils of Arctic melt and the concerns of first-nations.

She even managed to get into the so-called High Ambition Coalition pushing for a tough climate pact – that despite Canada’s carbon cutting pledges getting a tough ride from green groups.

In June 2016 US environment chief Gina McCarthy talked of “kindred sprits in Canada”, alluding to what seemed a rock-solid climate alliance between Trudeau and Barack Obama.

Caps on methane emissions, a 2025 goal to source 50% of electricity from low carbon sources and a ban on Arctic oil drilling were among the headline initiatives secured by Ottawa and DC.

This followed on a national deal to implement a carbon tax by 2018, built on legal frameworks delivered by provinces through 2015 and 2016.

Still, the polish is starting to wear off, and Canada’s climate perkiness shows signs of drooping.

The pressure Trudeau faces from the oil-rich heartlands of Alberta – Canada’s Texas – is intense, illustrated in a painful “Town Hall” event he fronted on Tuesday.

Pinned on his recent comment that fossil fuels and oil sands will need to be phased out in time, a man wearing a “Make America Great Again” hat accused him of being a “liar or confused”.

“You’re in Alberta right now, sir. You’re not in Ottawa,” he shouted at Trudeau. “Yet when you come to Calgary, you tell people you’re sorry.”

Angry man received an apology from a mollified PM. “We know our transition off of fossil fuels is going to take a long time. My responsibility now… is making sure Canadians have good jobs,” he said.

“Making sure communities are prospering… and doing it in a way that understands our responsibility to the environment and future generations.”

Politically it was the wise answer. Scientifically Trudeau’s stance is highly dubious. As he told the kids last November, it’s important to “listen to all major climate science organisations”.

Do that and the answers are clear: the estimated tar sands reserves contain enough CO2 to bust half the remaining carbon budget scientists say is left before 2C of warming is highly likely.

Unlocking Keystone XL makes this more likely, as do the other two pipelines signed off by Trudeau ahead of Christmas.

It’s a tough job being Canada’s PM, one made even harder by the election of Donald Trump. But the science is there, and Trudeau has a decision to make.

Will he do the right thing and the smart thing?

Read more on: US | Canada | Justin Trudeau US