Why did Obama triumph on climate abroad, but fail at home?

Globally Obama was praised for US climate diplomacy, but at home his agenda stretched the ideological divide, creating the means for its own destruction 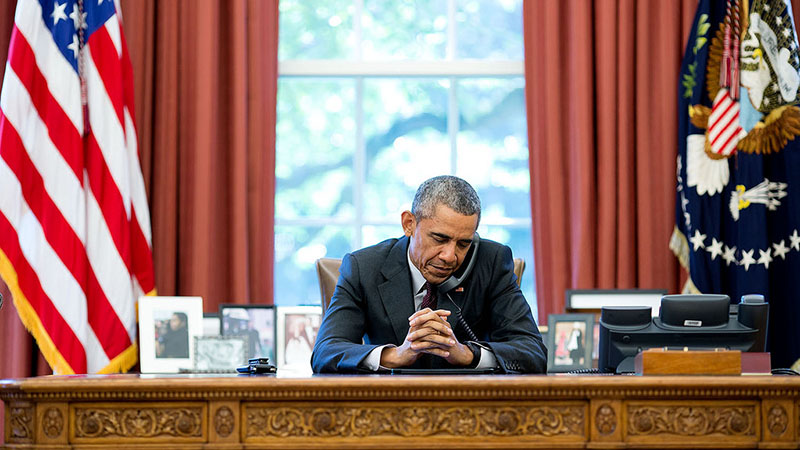 If there’s one lesson to draw from the past eight years, it’s that you’ve got to do more to sell climate policy than just explain the science.

As my colleague Megan Darby outlines in a set of features on Obama’s climate legacy, his White House administration bust themselves to deliver a UN carbon-cutting pact.

The Paris summit simply would not have delivered were it not for Obama and Kerry’s overtures to China through 2013 and 2014 and the subsequent pact between the two countries.

But there was a stark contrast in impact between the State Department’s climate diplomacy around the world and the sales pitch Obama made to the average American.

This failure was acknowledged by outgoing US environment chief Gina McCarthy in an interview with Reuters correspondent Valerie Volcovici last week.

“We tried to change the outreach and messaging in rural America in a number of ways, but… has it changed the rhetoric that people hear? It hasn’t,” she said. “We couldn’t get it, but I wish we had.”

Obama had more success on the world stage than at home – part 2 of 3 on his climate legacy: https://t.co/q7PH3HKdA7 pic.twitter.com/oIzUZXlka7

Failure to convince swathes of rural Americans that the clean energy revolution offered them a future was one of many reasons resentment against her agency was stoked up.

Coal communities blamed the EPA for the drop in demand for their produce and decline in their living standards, despite a wealth of evidence suggesting coal’s death was linked to the rise of gas.

“Just because climate continues to be bandied about as a partisan issue instead of just a science issue, it’s made EPA’s job more difficult,” McCarthy added.

The administration did try, harnessing federal agencies to make climate change a focus for security, science, health, agriculture and education.

“We are working with communities and state, tribal, and local governments to build resilience and adapt to climate-related hazards,” reads the 2016 US report to the UN’s climate body.

“Together, these policies are driving downward trends in US GHG emissions and are creating cleaner, healthier air, while still allowing for economic growth and job creation.”

If Obama and Democrat lawmakers thought the push on growth and jobs would break the cycle of negative rhetoric on climate from the centre-right, they were mistaken.

Polling by the Pew Research Centre in October 2016 illustrates the deep divide that separates Republicans and Democrats on climate change.

Where 54% of liberal Democrats believed climate science, only 19% of liberal Republicans agreed, a figure that fell to 11% for right wing GOP supporters.

As 76% of liberal Democrats saw US regulations on cleaning up power plant emissions as good news, just 29% of conservative Republicans agreed.

“Political orientations tend to influence how knowledge about science affects their judgments and beliefs about climate matters and their trust in climate scientists,” read the report.

The so-called ‘War on Coal’ is one example of how Obama’s climate policies were trashed, a rhetorical device from Republicans that gained traction across the centre-right.

The rise of fracking and cheap gas saw coal’s profitability dive, but the genius of the ‘war’ construct was that at its heart there was a nub of truth: coal communities were going out of business, fast.

Sharp lawyers hired by 350.org and the Sierra Club – backed with funding by billionaires Tom Steyer and Michael Bloomberg – saw the polluting energy source hounded through the courts.

According to the Sierra Club’s 2016 review, since 2010 a total of 245 US coal plants have announcement their retirement – that’s just under half of the national total.

The combination of gas, regulations and lawyers was brutally effective – but it exposed Obama and the Democrats to claims by Trump they had left the rustbelt to rot.

Still, some DC analysts reckon any overtures from Obama to Republicans would have made little difference, such was the hostility towards the president.

“Remember this is the Republicans that said that their main objective was to stop everything that Obama did and Republicans where even John McCain (lead author of multiple climate cap bills) was saying negative things on climate action,” says Jake Schmidt, director of the international climate program at the Natural Resources Defense Council

“Obama left the door open but there really was no willing partner to walk through that door.”

Others say Obama’s focus on widening medical insurance provision in his first term left him with few friends on Capitol Hill, requiring him to use his executive powers in term two to force through climate policies.

“After missing the opportunity before the 2010 congressional election that changed everything (he focused on getting Obamacare through, at the expense of climate, immigration reform, and nearly everything else), in my observation he really did not make an effort to bring major climate legislation to Congress and gain their support for it,” says Timmons Roberts, a climate policy expert at Brown University, Rhode Island.

Writing in the Washington Post, Sheldon Whitehouse, Democrat senator for Rhode Island and a passionate advocate for tough climate action, said hopes of bipartisan progress disappeared in 2010, when a law was passed wiping out limits on corporate support for politicians.

“Talking to my senate Republican colleagues about climate change is like talking to prisoners about escaping. The conversations are often private, even furtive. One told me, “Let’s keep talking, but you can’t let my staff know,”” he writes.

Reporters on the Capitol Hill beat have told Climate Home the Obama administration did not take kindly to anyone criticizing their climate playbook, pointing out the alternative was nothing.

The Clean Power Plan may yet hold, efficiency standards for vehicles and buildings may linger, the US could remain an active if quiet member of the UN climate process.

But just as Obama’s executive action created US climate rules, so a hostile White House can damage them, further entrenching the split between the right and left in US politics.

Mending DC’s broken climate politics rather than fighting for delicate climate policies may yet be the best bet for robust and long term US carbon reductions.