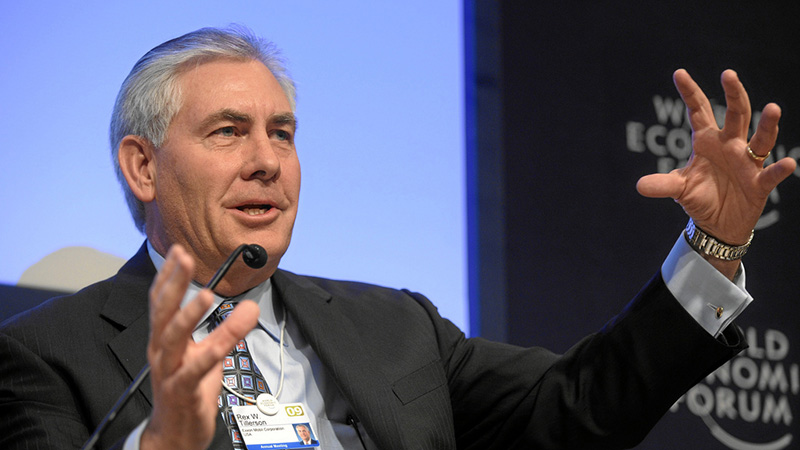 US president-elect Donald Trump has named the boss of the country’s largest oil firm as his choice to head the State Department.

In a statement emailed to media, Trump hailed the 64-year-old Exxon Mobil CEO Rex Tillerson as “among the most accomplished business leaders and international dealmakers in the world”.

“As Secretary of State, he will be a forceful and clear-eyed advocate for America’s vital national interests, and help reverse years of misguided foreign policies and actions that have weakened America’s security and standing in the world.”

Critics say Tillerson, who has strong links to Russian president Vladmir Putin, is the latest sign the incoming Trump administration wants to rip up the country’s climate and environmental policies.

While Tillerson is on record saying he believes climate change is a threat, he has also questioned the accuracy of climate models and this year said the world needed the oil of “five Saudi Arabias” by 2040.

Andrew Steer, head of the Washington DC-based World Resources Institute, said Tillerson would have to “distance himself” from business interests in his new role.

“ExxonMobil has long opposed action to slow climate change. While the company has recently acknowledged the human role in climate change and declared support for the Paris Agreement, Tillerson would need to go much further.

“One of the critical tests at his confirmation hearings must be his demonstration of a true commitment to America’s leadership on climate action, including fully supporting the Paris Agreement and honoring the country’s international climate commitments.”

Under current secretary of state John Kerry, the US has taken a hawkish line on climate, sealing bilateral deals with China, India, Brazil and Canada, pushing hard for the 2015 Paris climate pact and sealing a UN agreement to curb the use of potent warming gases used in fridges.

“Does Rex Tillerson understand that democracy, the Earth’s climate, and human rights matter more than profits and petroleum? To judge by his record, you’d have to say no,” he said.

“In Tillerson’s tenure, Exxon Mobil has supported undemocratic regimes, attacked climate science and activists, and stands accused in US courts of complicity in human rights abuses including torture, murder, and sexual assault.”

Always useful to have friends in high places https://t.co/NTsbsC9VLi pic.twitter.com/8IfYlZii0o

Tillerson will have to face US lawmakers in January before his appointment is confirmed, and it’s far from certain whether Senators will greenlight the nomination.

Leading figures in the Republican party have voiced concerns over his close links to Putin, who awarded him Russia’s “Order of Friendship” in 2013.

“Being a ‘friend of Vladimir’ is not an attribute I am hoping for from a Secretary of State,” tweeted Republican senator for Florida Marco Rubio.

“I don’t know the man much at all, but let’s put it this way: If you received an award from the Kremlin, ‘the order of friendship,’ then we’re gonna have to do some talkin’,” said fellow Republican senator Lindsay Graham.

“We’ll have some questions. I don’t want to prejudge the guy, but that’s a bit unnerving.”

Senator and former Republican presidential nominee John McCain said: “It’s a matter of concern to me that he has such a close relationship with Vladimir Putin, that that would color his approach to Vladimir Putin and the Russian threat.”

“We know he’s an oil expert – but he’ll have to start preparing now,” they said.