With appeal to Trump, Kerry (and US) leave climate leadership 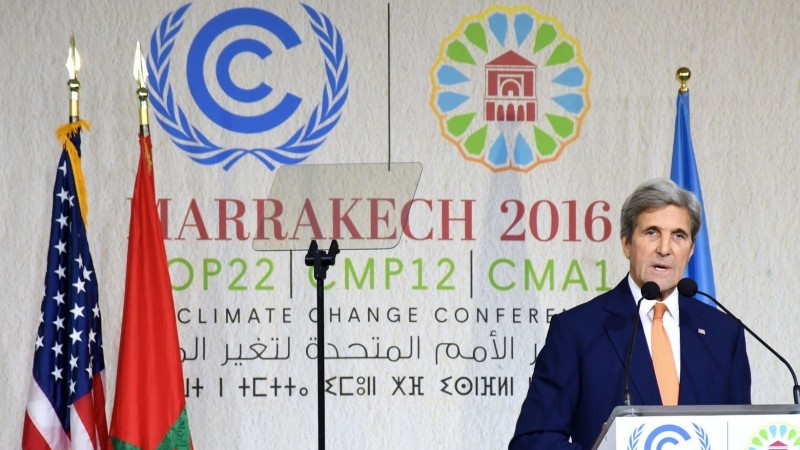 In an emotional speech on Wednesday in Marrakech, outgoing US secretary of state John Kerry implored president-elect Donald Trump to cast aside ideology and seek the facts on climate.

To a conference room packed with dignitaries, journalists and state department staffers, Kerry said: “For those in power, in all parts of the world including my own, who may be confronting the decisions about which road to take at this critical juncture. I ask you, on behalf of billions of people around the world… to see for yourselves. Do your own due diligence, before making irrevocable choices.”

Kerry questioned the place that climate change has come to occupy in the US political arena – a political tool used by both right and left to tar the other.

“Climate change shouldn’t be a partisan issue in the first place,” he said. “Noone has a right to make decisions that affect billions of people based on solely ideology or without proper input.”

“And noone, noone, should doubt the overwhelming majority of citizens of the United States who know climate change is happening and who are determined to keep our commitments that were made in Paris.”

The speech may have been made in Morocco, but Kerry’s intended audience was clearly the current occupant of a gold plated penthouse at 725 5th Avenue, New York. Earlier in the day, the Guardian’s Arthur Neslen (before meeting the burly arm of a secret service attendee) overheard Kerry telling another reporter that climate change was “bigger than one person, bigger than one president… We have to figure out how we’re going to stop this”.

Hundreds of people had lined up in the heat of the Moroccan sun in order to watch the secretary of state. As he walked in, the room stood as one and applauded. He was introduced by the US’ chief climate negotiator Jonathan Pershing in the warmest terms as a man who was “the embodiment of this administration’s commitment and determination [to lead on climate]”.

It was without doubt a valedictory address. Kerry has attended all 22 years of UN climate conferences, meeting his wife at the Rio earth summit in 1992. He promised he would be back, but only as “citizen Kerry”.

He will now step down from a long-term leadership role in global climate cooperation. With the incoming president outwardly hostile to UN efforts to finding a solution to the problem, many expect his country will follow him into the shadows. The elder statesman urged the rest of the world to continue the work of the UN, despite the political turmoil in the US.

Since last week’s election result the political landscape of the climate process has been transformed. Rather than recoil, there are signs world’s other economic superpowers are now shifting to fill the political void that will be left by the US.

However the expected withdrawal of the world’s second largest emitter from the Paris agreement will not go smoothly. “It’s going to be messy,” said an EU delegate.

The response will require a coalition of leaders from developed and developing nations to increase their commitments to cutting emissions growth. They will also need to fill a gaping shortfall in climate finance, as the world’s largest contributor is almost certain to shut off the faucet.

The EU source told Climate Home that talks between the Europeans and China had been positive and there was a sense of resolve shared by the economic heavyweights. The EU climate commissioner Miguel Arias Cañete ended the meeting in a tweeted hug with the Chinese lead negotiator Xie Zhenhua.

On Wednesday Cañete tweeted farewell to John Kerry. The tweet was accompanied with a picture of the US and EU chiefs shaking hands at the major economies forum, a meeting which the US has chaired since the Bush administration. Climate Home understands that no meeting has been scheduled for next year although Cañete told Climate Home “we will not let it die”.

I will miss this man. pic.twitter.com/JJEf7WWYWp

Cañete said that Europe would continue to push for a more ambitious approach to climate change.

“In the future we will always try to have as much leadership as possible. We’re building strong alliances,” he said. “In the past we have had a very good cooperation with the United States. We expect to have it also in the future. But nevertheless we will be in the front of ambition in [policies related] to climate.”

“It’s very probable that we will see fundamental changes,” said a German government source, but to openly commit to a future in which Trump had left the climate process would be a “self-fulfilling prophecy”.

“It may be that there will be a stronger role required of the Europeans, including Germany, also in relation to China for instance,” the source said.

China’s vice foreign minister Liu Zhenmin told a press conference that he still expected the US to fulfill the promises made in the French capital last year but that any change in US policy “won’t effect China’s commitment to support climate negotiations and also the implementation of the Paris Agreement”.

In his speech, Kerry urged leaders of Asian countries who were planning to build coal power plants to think again before locking the world into that dirty fuel source.

“That threatens everything we are trying to achieve here,” he said. “We literally cannot use one hand to pat ourselves on the back for what we’ve done to take steps to address climate change. And then turn around and use the other hand to write a big fat check enabling the widespread development of the dirtiest source of fuel in an outdated way. It just doesn’t make sense. That’s suicide. And that’s how we all lose this fight.”

“If we fall short, it will be the single greatest instance in history of a generation in a time of crisis abdicating responsibility for the future,” he said, adding a jibe that could only be seen as a challenge to the notoriously egotistical Trump: “Only those nations who step up and respond to this threat, can legitimately lay claim to a mantle of global leadership. That’s a fact.”

It was a day when the current US administration left it all on the field. Immediately after Kerry’s speech, president Barack Obama told an audience in Greece that US economic growth was now independent of carbon emissions but “our work is far from complete”.

Earlier, as Kerry’s motorcade waited for a traffic jam caused by a fire in the city of Marrakech, his intended audience was glued to their phones as the news filtered through that the US had announced its long-term carbon emissions plan. The country says it will cut 80% from its emissions (compared to 2005) by 2050.

It joins Germany, Mexico and Canada in publishing mid-century strategies this week. Germany announced its goal of 80%-95% on 1990 levels on Friday.

Kerry was adamant that the compass of the economy was irrevocably turning away from fossil fuels. Clean energy would become “the largest market the world has ever known”, he said.

Almost every clause of Kerry’s speech contained a thinly-veiled warning for the new administration.

“No nation will do well if it sits on the sidelines, handicapping its new businesses from reaping the benefits of the clean tech explosion,” he said.

Repeatedly he lauded the work of the scientists “who have dedicated their entire lives to expanding our understanding of this challenge and whose work will be in vain unless we sound the alarm loud enough for everyone to hear”.

Invoking Winston Churchill, who once took a whisky-fuelled mid-war trip to Marrakech to admire the sunset with Franklin Roosevelt, Kerry said: “It’s not always enough to do our best, sometimes we have to do what is required.”

Before he left the stage to more than a minute and a half of continuous applause from an appreciative home crowd, Kerry recalled a moment that has come to define the recent successes of the climate talks: signing the Paris agreement with his granddaughter Isabelle sitting on his knee.

“I thought not of the past, but I thought of the future. Her future. The world her children would one day inherit,” he said. Kerry recalled that afterwards, people approached him to say how the moment had affected them.

His voice breaking, he said: “They were reminded of the stakes.”