Why the new climate math is a declaration of war

Comment: Some of the most influential thinkers about climate change have decided that the time for negotiation with fossil fuel companies is over 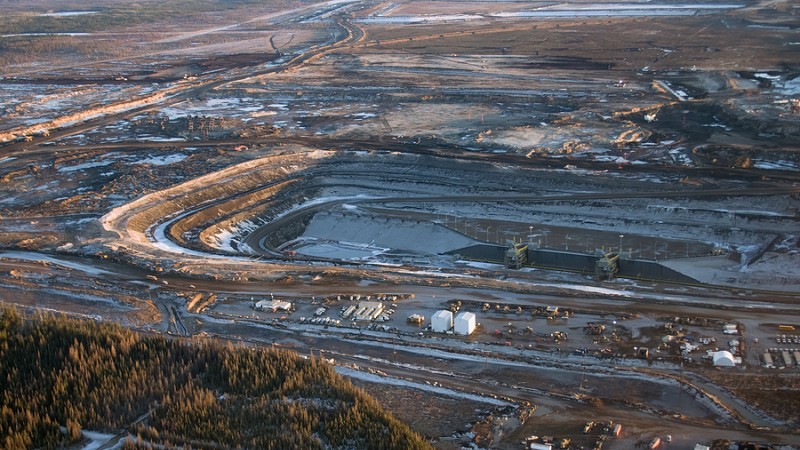 New calculations from a US NGO indicate tar sands extraction in Alberta, Canada will have to stop for the world to have a chance of limiting warming to below 2C (Pic: Flickr)

There is new climate math and it is the most irresistible yet. So we’ve heard from two of the most eloquent voices for action on climate change: Bill McKibben and George Monbiot.

Writing in response to a report released by US NGO Oil Change International (OCI), McKibben and Monbiot echoed OCI’s conclusion that no new coal mines or oil or gas wells can be opened up, lest we exceed the carbon budget imposed on us by atmospheric physics.

In New Republic, McKibben had a characteristically elegant device to explain the findings. There are 942 gigatons of C02 stored in working mines and fields.

But the UN Intergovernmental Panel on Climate Change (IPCC) says that we can’t exceed 800 gigatons to stand a decent chance of staying within 2C. That’s the upper limit set by the Paris climate agreement.

Thus, said McKibben, the earth’s response to climate change would be henceforth governed by this inequation:

From this he concluded that no new extraction sites should be opened. To do so would be to fail the simplest of maths tests.

OCI founder Stephen Kretzmann put it this way: “Continued expansion of the fossil fuel industry is now quite clearly and quantifiably climate denial.”

That symbol means ‘it logically follows’. But the logic is flawed. Critically, in reaching their final conclusion OCI made political and social choices that bear examination.

A year ago, Carbon Tracker Initiative looked at the same problem as OCI and came to a different conclusion. Yes, they said, opening new coal mines was bonkers. But some new oil and gas fields might be acceptable.

There are several reasons why having larger amounts of carbon in working fields that we can safely put into the air doesn’t automatically mean no new fields can be opened.

This new math profoundly changes our situation–fossil fuel frontier now closed, unless we want to break the planet https://t.co/FTCRvKY2Kd

An example of this nuance is that there is so much coal out there it dominates the measure, but how fast is it being dug up and extracted?

This matters because the longer it takes, the less competitive coal becomes against renewable energy sources and the more likely we are to see coal mines closed before they are exhausted. This could create some wriggle room.

Conversely, oil is going to be the most difficult fossil fuel to phase out because of the technological challenge of shifting planes, ships and trucks toward zero-carbon fuels.

At the same time, oil and gas wells decline in productivity toward the end of their lives sending their operating costs higher. This means that old fields might be closed early and new fields might fill the demand more cheaply – even with the start up costs.

This leads to the conclusion that:

The OCI report did take these dynamics into account, but it critiques the “least-cost pathway”. Just because some new oil drilling might cost less on paper, OCI argues, doesn’t make it the appropriate approach in reality.

New wells have investment and political interests behind them that makes them harder to shut down when the time comes.

“Since political action is required, we should look for solutions that are not just economically optimised, but politically optimised. Politically, it is much more difficult to demand the loss of physical capital – on which dollars have been spent, and steel and concrete installed – than to relinquish the future hope of benefits from untapped reserves,” argues the report.

Here we find the crux of the disagreement. Carbon Tracker offers an olive branch of leniency to oil and gas companies to continue doing what they do for a while longer. OCI says they are drunk on profits and we should take away their keys.

Having made that decision, the maths was found to back it up. According to Kretzmann the major difference between Carbon Tracker’s report one year ago and Oil Change’s more recent one is the budget under which we allow ourselves and the fossil fuel companies to operate.

This is a risk judgement. In the climate world, the more carbon you emit, the less chance you have of achieving a certain temperature limit. Carbon Tracker base their budget on a scenario developed by the International Energy Agency (IEA) – called IEA 450.

A new report gives us the numbers we need: they show that the Paris agreement means no new coal, oil or gas. My col:https://t.co/I2dCEXkG82

“IEA 450 is based on a 50% chance of 2C, which frankly we think is too low to represent the top end of the Paris range,” Kretzmann told Climate Home. “If this is our policy ambition, shouldn’t we be aiming for better than a coin flip’s chance of success?”

OCI chose a scenario that gave a 66% chance of staying within 2C. Their budget also gives the world a 50% shot of staying below 1.5C – the more ambitious end of the Paris agreement.

So the new maths is based on a decision about acceptable risk. Which is fair enough but hardly revelatory.

The difference is important because it reveals a split amid influential thinkers in the climate debate about the best way to effect change.

The question hinges on whether to engage fossil fuel companies on their terms: the IEA is considered an authoritative voice within the energy sector and some new oil wells is better than none. Or is it time for all-out war?

McKibben notes that his initiation to carbon budgets came when he based a seminal essay on the subject on the work of Carbon Tracker. But he now clearly believes their approach is too weak for the times.

Writing in the Guardian, Monbiot frames it as the conflict we must have: “Preventing climate breakdown means defending democracy from plutocrats. It’s their interests versus the rest of humanity’s.”

The war has already begun. Climate activists are drawing “red lines” in the grassy hills of Dakota and the courtrooms of the US, in the mud of the Ecuadorean Amazon, on the backs of whales in the Great Australian Bight and dozens of other places.

Calls for a moratorium on new coal mines will now shift to all new fossil fuel extraction. The above formula will be cited as the justification.

The reason McKibben invokes mathematics is its immutability. “The numbers are the numbers,” he says. An equation is inarguable. But the simplicity hides the subtext.

A decision is being taken and as the maths gets more complicated, we shouldn’t ignore the rounding.