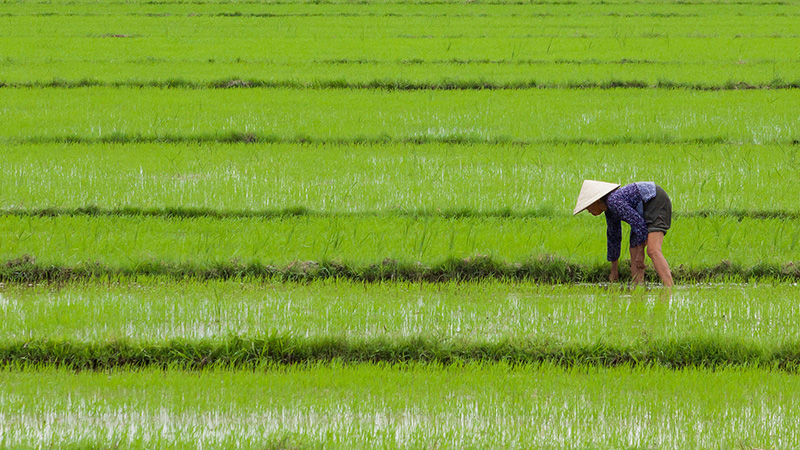 By Santosh Koirala in Rampur, Nepal

Directly seeding rice into fields rather than transplanting it into flooded paddies would dramatically reduce methane emissions and slow down climate change, according to scientists studying the staple crop.Santosh Koirala in Rampur

A number of experiments in Asia, particularly in the Philippines and Japan, show that a change in the way rice is grown would have considerable other benefits in saving water and improving yield.

However, in Asia, which accounts for 90% of rice production, only a quarter of the crop is currently produced by direct seeding.

The research, cited by the UN Food and Agriculture Organisation, says that while rice is a staple food for more than half the world’s population, growing it is becoming less profitable because of the costs of labour, shortage of water and high energy costs.

The research paper says that the present practice of tillage and planting in flooded rice paddies – known as puddling − damages the soil and affects the quality of future crops. This, plus the need to cut methane emissions, “demands a major shift from puddled transplanting to direct seeding of rice”.

Without changes, the world has no hope of reaching the extra 100 million tons of rice yield that it is estimated will be needed by 2035 – an increase of 25% on current crops.

Methane is the second major greenhouse gas, after carbon dioxide, and agriculture accounts for 40% of these emissions. Although farm animals are a major source, flooded rice paddies emit as much as 500 million tons, which is around 20% of total manmade emissions of this gas.

The Intergovernmental Panel on Climate Change has estimated that rice cultivation is a major contribution to global warming.

When rice is grown under puddled transplanted conditions, paddy soil becomes anoxic − depleted of dissolved oxygen − and then, in the absence of oxygen, microbes that break down plant matter produce methane.

Flooded soil may trap large quantities of methane, and this then escapes into the atmosphere during wet tillage, harrowing, transplanting and weeding.

Rice plants themselves also have a system of releasing methane through their leaves called methanogenesis. The rest escapes either by bubbling upwards or when the soil finally dries out.

Although not all rice is grown in flooded conditions, 90% of rice land globally is at least temporarily flooded. On average, the soil is fully waterlogged for about four months each year.

The research shows that direct seeded rice has a shorter flooding period (roughly a month) that ensures there is oxygen in the soil through most of the rice season. There is also decreased soil disturbance compared to transplanted rice seedlings.

Jagdish K Ladha, principal scientist for soils and agronomy research at the International Rice Research Institute in New Delhi, says direct seeding of rice always reduces methane emissions from the crop and can be up to 90%, but that depends on methods used and the water management system.

A field experiment in the Philippines showed that the direct seeding techniques reduced methane emissions by 18% as compared with transplanted rice. Another study, in Japan, showed that global warming potential declined by 42% just by changing puddling of rice seedlings to zero tillage.

“Considering the effectiveness of direct seeding of rice to reduce the methane emissions, compared to the conventional rice transplanting technique, it is imperative that it be promoted throughout Asia,” Ladha says.

This article was produced by the Climate News Network. Santosh Koirala is a student of agriculture at the Agricultural and Forestry University in Rampur, Nepal